ICAP plc, one of the largest inter-dealer brokers in derivatives, foreign exchange and treasury markets, has announced that its subsidiary ICAP SEF (US) LLC  received approval from the Commodities Futures Trading Commission (CFTC) for temporary registration as a swap execution facility (SEF). The application to register as a SEF was filed by ICAP earlier this month, and was approved last Friday by the CFTC along with the approval of Thomson Reuters LLC (as an SEF which was included in the same CFTC announcement).

Thomson Reuters filed its application three days subsequent to that of ICAP, receiving quick approval by the CFTC, showing that the US regulator is turning applications around quickly. In Europe, such matters are still very much in their infancy.

As an approved SEF, Thomson Reuters will support foreign exchange, NDFs and options, and trading on the facility which supports regulated and non-regulated FX products is scheduled to begin on October 2nd, 2013.

According to the firm, Thomson Reuters and FXall customers who have completed the on-boarding process, which the group began in July this year, will have access to Thomson Reuters SEF trading capabilities.

ICAP’s plans for its SEF, which will be headquartered in New Jersey, include interest rate swaps, credit default swaps, equity derivatives, commodities, and NDFs according to the company’s statement. In addition, the SEF will be operated using a request for quote (RFQ) and central limit order book system,  also offering block trade capabilities, electronic crossing and execution via brokers.

Commenting on the plans in a related trading statement by ICAP last week, Group CEO Michael Spencer made a corporate statement that, “Earlier this month we filed our Swap Execution Facility (SEF) application, a major milestone for ICAP.”

“While the introduction of SEFs may give rise to short- term market uncertainty, I believe that with our expertise and experience in operating regulated markets, the quality of our technology and the depth of our customer relationships, we look forward to our SEF becoming a leading facility for trading in the new regulated landscape.”

ICAP’s recent media attention, in addition to the above news,  included the CFTC ordering the conglomerate’s European entity ICAP Europe Ltd.(IEL) to pay a $65 million penalty for manipulating the Japanese yen LIBOR rate, and UK FCA ordering IEL to pay £14 million in the UK, for a combined total of $87 million (based on prevailing exchange rates as of that date).

According to the CFTC, ICAP has fully cooperated with both the FCA & CFTC, whose orders included a thorough strengthening of internal procedures and controls. ICAP said it would treat the expenses related to settling with both regulators as an exceptional item.

With regard to Thomson Reuters having been granted temporary SEF status, Phil Weisberg, global head of FX at the firm stated that, “The implementation of our SEF is an important milestone for Thomson Reuters and our customers as we work with them as their strategic execution partner to meet their workflow and execution requirements.”

“Going forward, as new regulations continue to come into effect around the globe, Thomson Reuters and FXall clients can rest assured that they will be able to continue executing their necessary FX trades in a manner consistent with current workflows and in compliance with all regulatory requirements,” concluded Mr. Weisberg.

Following that news, shares in ICAP fell, resulting in roughly £56 million of its market capitalization being wiped off, nearly the same value (in $) it has been forced to pay in fines by the British and US authorities.

For a relative comparison of the firm’s trading volumes,  ICAP’s customers traded an average of $1.3 trillion dollars in daily trading volume through ICAP’s systems, according to its latest annual report (2013).

Concurrently, ICAP released its latest H1 report showing volumes down 1% YoY as part of the trading statement published by ICAP last week, where Mr. Spencer said the following in the statement, “During the first half we have seen some improvement in the global financial environment benefiting activity in certain markets.”

“This has been offset, however, by a steeper than expected slowdown over the summer months. We remain focused on delivering our ongoing cost savings programme as well as continuing to invest in new platforms, products and services which will drive our growth over the coming years,” explained Mr. Spencer.

Today’s news from ICAP regarding the SEF’s approval, follows the successful completion of connecting Traiana, an ICAP company, to MarketAxess SEF, which also received temporary registration with the CFTC earlier this month.

MarketAxess SEF has since handled the first live trade from Triana’s CreditLink service that acts as the credit hub to verify pre-trade credit limits, in accordance with the requirements under new CFTC rules pertaining to SEF’s. 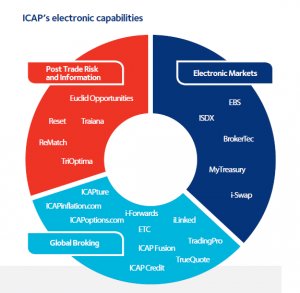 In ICAP’s most recent annual report (2013), Mr. Spencer said, “This has been the toughest trading environment in my nearly 40-year career in the wholesale financial markets. ICAP’s performance during 2012/13 reflects these extraordinarily difficult market conditions, but also the diversity and resilience of the Group we have built.”  Following a reported drop of 12% below the prior year, the Group reported revenue of £1,47 billion for the year ended March 31, 2013.

Also in the annual report, the significant deceleration of global growth during the past year was attributed to private sector deleveraging and government fiscal constraint. However, US economic growth was noted as resilient whereas Japan as having experienced a modest recovery, despite slowdowns across the Eurozone and China.

These views from the annual reports could coincide with the SEF expansion plans for ICAP in the US markets where increasingly efficient  regulatory framework has aided the fast approval of SEF’s applications. Whether similar plans from ICAP are in store for Japan or the rest of Asia, is something that will be followed closely.