Spain, the country which has given the world Sangria and Paella, is the fifth largest economy in the European Union. After a tough period which saw the country fall into recession, the country is now on the mend, and so is its foreign exchange (forex) industry.

In our latest country overview series, we are taking a look at the FX industry in Spain – who are the top brokers, what trends influence the industry as well as the most popular assets and trading instruments.

Spain’s financial market rests under the national umbrella of the Spanish Stock Market – including the bolsas, the derivatives markets, and fixed-income markets. Out of the bolsas, the Bolsa de Madrid is the largest and most international of Spain’s four stock markets.

The benchmark of the Bolsa de Marid is the IBEX 35 Index, a capitalization-weighted index comprising the 35 most liquid Spanish stocks traded in the continuous market.

For the securities market, which includes forex, the country’s local regulator is the National Securities Market Commission (CNMV), which is responsible for supervision and inspection. However, as Spain is part of the EU, FX trading providers must also abide by the rules outlined by the European Securities and Markets Authority (ESMA).

One of the largest changes to Spain’s FX and contracts-for-difference (CFD) sector, was the product intervention measures imposed by ESMA last year, which saw leverage restrictions on a number of instruments, as well as marketing caps and the banning of binary options.

This not only impacted Spain but all countries in the EU. As Finance Magnates has reported extensively since the measures were introduced last year, brokers have seen a drop in client activity, volatility, and as a result, profits and revenues.

However, despite the obstacles that ESMA’s product intervention measures have brought, Javier Molina, an analyst at eToro, believes that overall, the changes in regulation has been positive as it has brought more control for traders and more confidence in the industry.

Because of the structure of EU law, traders in Spain have the ability to trade with a suite of European brokerages such as CMC Markets, eToro, AvaTrade, FXTM and more. But which brokers top the list in terms of trading volume in the country?

According to estimates from Finance Magnates Intelligence DIF Broker, a Portuguese broker with operations in Spain, leads the way in the country, followed by UK-based IG and ClickTrade. 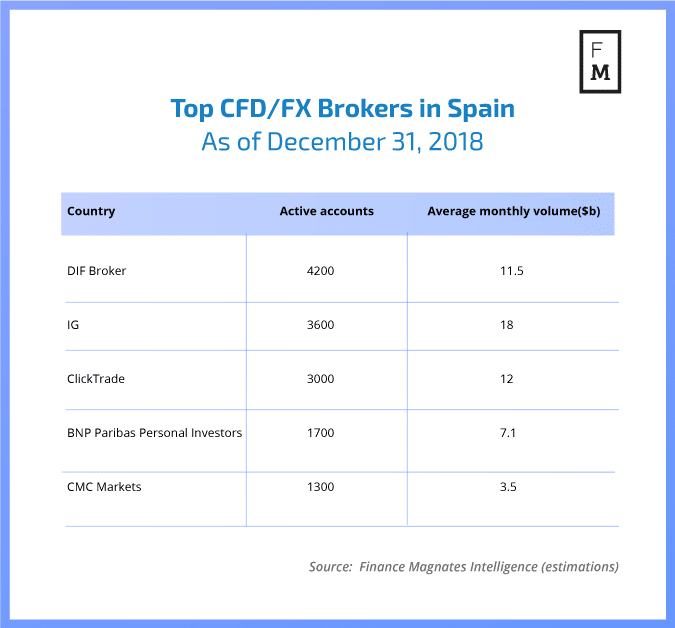 Who is the Average Trader in Spain?

According to Molina, the most popular FX instrument to trade is the EUR/USD currency pair – the most commonly traded on the market. This is because traders in Spain tend to be more conservative and stick to the main currencies.

Speaking to Finance Magnates, Molina said: “Investors in Spain are more likely to be male, older than 26 and college educated. Investors with lower portfolio values tend to hold a less diverse mixture of investments than those with higher portfolio values.”

“Just 14% of those with investments, use products with leverage. In general, they tend to be conservative and when trading, really concentrated in no more than 2 or 3 assets. FX and cryptos are currently the most traded assets for Spanish investors on eToro,” he added.

In Spain, most FX day trading happens through near-term futures, options, and CFDs, with the latter being the most popular for traders with medium and low portfolios in terms of volume.

The biggest influences on trading trends and the use of specific products in Spain is market liquidity, regulations, and the global economy, according to Molina.

When asked whether he believes the FX industry in the country is healthy, Molina replied: “Yes. Investors have developed and honed their skills in the last few years. We have more online brokers offering good educational tools, including seminars, and webinars.”