Not only is Germany the largest economy in the whole of the European Union, but it is also home to one of the largest foreign exchange (forex) markets in Europe, with many brokers and trading providers accessible for both retail and institutional investors.

As we have covered extensively, over the past 12 months there has been a series of changes to the way brokers can offer FX and contracts-for-difference (CFD) trading in the EU to retail investors – so how has that impacted the German FX market?

Germany is the EU’s Strength

Germany is arguably the most important economy for the EU and is often thought of as the glue which holds the bloc together. The country has a strong financial market which is home to the Frankfurt Stock Exchange – the 10th largest exchange in the world by market capitalization.

Speaking to Finance Magnates, Hodge said: “In terms of Indices the two main traded are the Dax followed by the US 30.”

According to the March 2018 Germany CFD/FX Report by Investment Trends, for the 12 months ended March 2018, the number of German CFD/FX traders grew by 23 percent to reach 76,000. 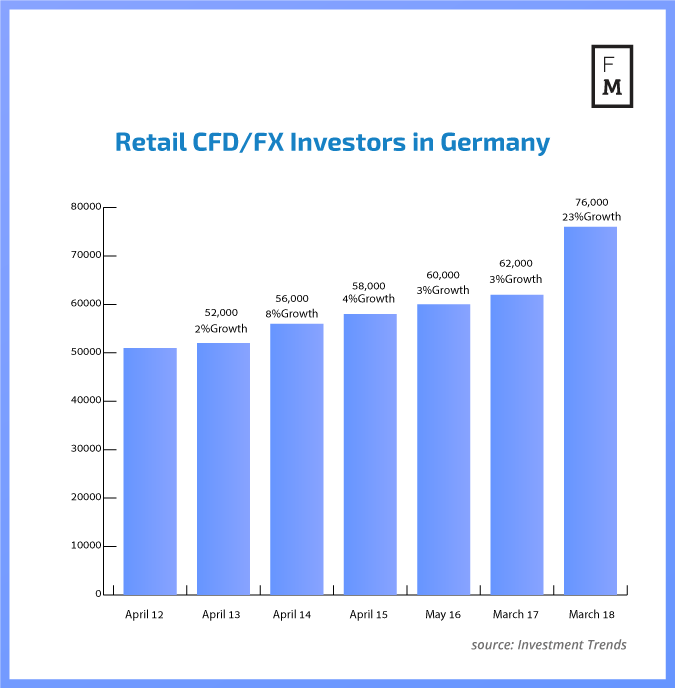 This is the largest annual growth for Germany in seven years when the study first began in 2012. However, it is important to note that the time period in this report is before the European Securities and Markets Authority (ESMA) implemented its leverage and marketing restrictions for CFDs and FX.

It is very likely that the next report, which will cover the affected time period, will show a drop in retail traders entering the market in Germany. But this won’t just be limited to Germany, but across all of Europe – including the UK.

Besides ESMA, according to Hodge, one of the biggest influences on the forex market in Germany is mobile trading.

“The big change over the last five years in Germany has been the move to comprehensive trading on a mobile. In the early days mobile was very much used as a way to close out a position when clients were not at their desktop,” Hodge noted.

“Now, as technology and 4G coverage has improved rapidly, FX brokers have been able to offer a feature-rich mobile trading experience, which has led to substantive increases in the number of client trades executed through a mobile device.”

In Germany, the top five brokers in the forex and CFD trading sector are CMC Markets, IG, Comdirect bank, flatex, WH SelfInvest, and Plus500, according to estimates from Finance Magnates Intelligence. Both CMC Markets and IG lead the way due to large CFD trading volumes.

In fact, Germany’s trading market is rather unique. This is because, in a lot of countries, CFDs were an offshoot of forex trading and not vice versa. In describing this phenomenon, some professionals have even referred to forex trading as the ‘gateway’ drug to other asset classes. However, in Germany, the opposite is true; forex owes its advancements to the CFD industry.

According to CMC Markets, the most popular forex instruments for German traders are unsurprisingly the EUR/USD and GBP/USD currency pair. However, interestingly, behind these two is the EUR/TRY pair, which is followed by the EUR/GBP in terms of popularity.

As Finance Magnates has reported extensively, since the regulations were implemented in August of 2018, many brokers have suffered. This includes lower profits due to increased regulation costs, lower market volatility and a drop in retail traders.

At the moment, these measures are only “temporary” as the regulator has not yet made the restrictions permanent. However, it is widely expected that the watchdog will continue to renew the measures indefinitely until it eventually makes the laws permanent.

For German brokers and traders alike, any hopes of the restrictions being lifted have all but been destroyed. As Finance Magnates reported last year, Germany’s Federal Financial Supervisory Authority (BaFin) announced that it plans to make ESMA’s product intervention measures permanent in 2019.

CMC Markets Believes There are Still Opportunities Despite ESMA

CMC Markets is one of the largest brokers in Germany. Although the broker was not willing to comment specifically on how ESMA’s measures have impacted its business in Germany in terms of the number of customers, it did refer to its trading update published through the London Stock Exchange (LSE) at the beginning of April.

“Overall performance in FY 2019 has been impacted by reduced client trading activity following the implementation of the ESMA intervention measures on 1 August 2018, compounded by challenging market conditions during much of Q4,” the statement reads.

However, although client trading has dropped as a result of the measures, active client and new client numbers have remained stable for the broker. Because of this, the Group believes it will meet the consensus FY 2020 outlook.

As mentioned above, CMC Markets is just one out of many brokers who have faced difficulties regarding ESMA’s product intervention measures. Nonetheless, the firm does believe there are still opportunities to be had.

Speaking to Finance Magnates, Craig Inglis, Head of Germany & Austria CMC Markets said: “The recent regulations in CFD trading have limited the risk of loss. This makes the product interesting for those investors who have so far shied away from the incalculable losses. In addition, the often lack of discipline in trading has now been prescribed by law as a result of the reduction in leverage.”

Setting Up a Brokerage in Germany is Now Harder Than Ever

With tightening regulation in the EU, setting up a brokerage is now harder than ever. This is because the process is now more expensive and more confining than it was previously, and firms now need to be aware of a wider set of rules to comply with.