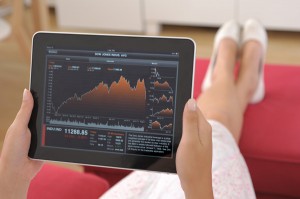 Online trading via mobile devices such as smartphones and tablets is growing rapidly according to a recent study published by Investment Trends, a multinational research company focusing on financial services and related industries in Australia, Asia, Europe and the United States.

The research carried out surveyed 12,398 Australian investors from April to June this year, in the largest study of its kind in Australia according to Uwe Helmes, a Senior Analyst at Investment Trends. The findings showed that 71% of CFD trading activity is now done via a mobile device with the remaining 29% done via a PC or telephone. The research also found that 17% of those surveyed intend to use an electronic device for at least a portion of their trading activity within the next 12 months. Investment Trends estimates that between June 2013 and June 2014, 585,000 Australians did at least one online share trade (approximately 3% of the total population). When reviewing other countries, Investment Trends estimates that 83% of traders in Singapore prefer to use a mobile device for trading purposes, higher than the 71% of traders in the US

Forex Magnates reached out to Investment Trends, which publishes separate periodic reports on specific industry niches, such as share dealing, leveraged FX and CFD trading. “Each particular sector has some statistical differences between the various countries surveyed, but the overall trend remains consistent,” said Mr. Helmes.

According to Mr.Helmes, “When figures for share dealing are combined with other financial products such as leveraged FX and CFD contracts, the raw numbers are much higher with the broad trend remaining constant that online and mobile participation rates for any financial instrument in Asia are broadly higher than those in the US or Europe.” When asked to highlight a standout country where he believes mobile and online trading is particularly on the rise, Mr. Helmes responded: “In Singapore, we’ve seen growth rates of over 50% in the mobile trading space over the past three years with Android devices overtaking IOS(Apple) devices since 2013.”

In the latest report covering Australian online share dealing only, the majority of investors surveyed regarded CommSec as having the “most satisfactory mobile trading platform.”

The fairly recent phenomenon of using mobile devices for trading keeps on growing. As mobile internet connections speeds increase rapidly alongside falling connection costs, it allows brokers to offer the same sophisticated services via mobile platforms that they already offer via a PC without compromising on execution, latency and other features.

The expansion in the variety and sophistication of devices available to traders is also a factor. Mobile phones were used primarily for calls and messaging when they were first adopted en masse in the late 1990’s. Today, mobile phones have large, high resolution screens, broadband internet access and third party software development. Mobile phones have become a derivative of a PC and with the introduction of hybrid devices such as smartphones, tablets and netbooks, the mobile device landscape has never been so rich.

The explosion in the use of mobile devices has influenced how brokers operate in the online trading industry because the additional convenience offered by mobility is very attractive to all traders, amateur or professional. The fact that financial markets and the various trading instruments available are becoming increasingly accessible with longer trading hours and more sophisticated via additional asset classes such as CFD’s, Binary Options, Futures and ETF’s, means traders have more information to keep track of and from more sources. Mobile devices help traders bridge this information gap.

The Investment Trends survey combined with other research available indicate that countries with higher national broadband speeds and faster mobile internet speeds tend to have a higher adoption rate for online trading. In 2014, the highest internet connection speeds are in Asia; specifically Hong Kong, South Korea, Japan and Singapore, according to Akamai’s ‘State of the Internet Report’ published in Q1 2014. With Taiwan placing eighth, Asia made up half of the top 10. With Asia leading the world in internet connectivity combined with more spare capacity for new traders compared to the US, UK and Europe, suggests the future is bright for both traders and brokers operating in the Asia-Pacific region.

Share this article
Tags: Australia / trading
Got a news tip? Let Us Know