The worlds largest oil exporter is preparing to host the much awaited 2nd Saudi Money Expo on the 2nd and 3rd May 2012 at the auspicious intercontinental Hotel.

Saudi Arabia is the largest economy in the GCC and has impressive growth figures of over 7%. It has managed to withstand the global recession with the assistance of oil prices peaking at $140 in 2008.

After the large success of the 1st Saudi Money Expo and Conference 2011 held in Riyadh, Jeddah aims at expanding the currencies trading market volume estimated at over SR10 trillion daily by hosting the Second instructive forum 2012 for Currency, Oil and Gold markets on 2-3 May, under the patronage of H.R Prince Dr. Saif Al- Islam Bin Saud Bin Abdul Aziz.

Organized by Stayconnected in co-operation with Al-Alwsat for Economic Consultants, the forum will witness the participation of leading companies from the Gulf region along with global financial institutions and economists from more than 15 European and American countries.

Speaking about the forum’s objectives, Khalid Kabbara, senior financial analyst at Stayconnected said: “This forum represents an opportunity for the Saudi investor to attend presentations on the outlook of the major currencies and commodities offered by some of the world key analysts. In addition, investors will have to opportunity to meet with leading foreign companies and learn from their expertise and experience, reviewing the latest trading technologies and discussing ways of cooperation.”

“We are very excited to organize this event which will be the first platform where Saudi investors meet face to face with some of the world top analysts to discuss the future of Euro, US Dollar and Japanese Yen as well as some of the more traded commodities such as Gold, Silver and Oil”

Kabbara pointed to a new statistical study including over 15 global brokerage companies, in which Saudi Arabia was ranked first in terms of investment volume between Arab traders, particularly since over 40% of Arab investors in currency, oil and gold markets are Saudi citizens.

“After the large success of the 1st Saudi Money expo and conference 2011, we bring this year to Jeddah, top analysts from over 15 countries to discuss again the global markets amid the current economical challenges and regional turmoil” explained Kabbara.
During the forum, experts from global financial institutions and economists, led by the British company “Alpari UK”, will shed light on the methods and techniques used to read financial markets indicators. Moreover, attendants and participants will be offered the chance to engage in free educational courses, designed to educate investors about daily market fluctuations.

The event is organized in partnership with “Alpari UK”, “FX Solutions” as the Official Sponsor, “FXDD” as the Main Sponsor, “Amana Capital” and “Swissquote Bank” as the Diamond sponsors, “Forex.com” as the Platinum Sponsor, “ Vibhs Financials” as the Gold Sponsor and “Heneyep Capital Markets” as the Silver Sponsor. UK-based newcomer Tradenext Limited will also be participating at the event.

The Conference halls opens it’s doors on May 2, 2012 at 1:00PM, investors are welcome at this free attendance event.

Saudi Arabian financial markets are limited to equities, ETF’s and Sukuk’s (bonds). Retail participation in the stock market is around 80%; there are around 140 mutual funds with over $20 bln in AUM however in comparison institutional investors have not been very active in the local bourse.

Foreign investors are keen to enter the (restricted) Saudi market, Japan’s Nomura (investment bank) has been granted authority by the capital Market Authority (Saudi regulator) to act as intermediary for overseas FII.

Saudi Arabian investors enjoy volatile markets and FX and CFD trading is growing in popularity as the first Saudi Expo was a great success. 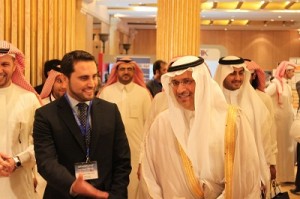 Forexmagnates team wrote a detailed report on the state of FX in the Middle East in the Q3 quarterly report 2011.