Chicago-based operator of commodity futures marketplaces, CME Group, with some of the biggest commodities exchanges across the globe, including the Chicago Mercantile Exchange as its subsidiaries, today reported its financial results for the third-quarter (Q3) of 2014. The group’s report reflects a weak bounce back for revenues and earnings compared to the abysmal previous quarter.

On a quarter to quarter basis, today’s figures reveal a 4% rise in revenues, a 4.4% increase in operating income and a nice 9.8% jump in net income from Q2 2014. Additionally, diluted earnings per share increased by 8.9% and excluding items noted in the reconciliation, adjusted earnings per share went up by 9%.

“Our core business performed very well during the third-quarter, with our record overall options volume and record volume from outside the United States accounting for 60 percent of the quarterly volume growth,” said CME Group Executive Chairman and President, Terry Duffy. “In addition, the momentum has continued, and October is on track to have the highest monthly volume in our history. In particular, on October 15 we set an all-time daily record with volume approaching 40 million contracts. This reflects the significant client demand during a more volatile period, supported by the company’s unmatched liquidity, tight bid-ask spreads, system reliability and capital efficiency. Bottom line, with nearly 9 million contracts traded that day from Europe, Asia and Latin America, we truly are the place where the world comes to manage risk.”

“During the third quarter, we streamlined our organizational structure to better meet the needs of our global client base and accelerate future earnings growth and cash flow,” said CME Group Chief Executive Officer, Phupinder Gill. “With increased agility from an operational perspective, we are aggressively focused on improving execution, enhancing efficiency and increasing our speed to market throughout the world. If we are successful, revenues will increase and expenses decrease, and our shareholders will be rewarded as we further strengthen our position in the evolving global marketplace. Based on our current plans, we expect to keep operating expenses essentially flat in 2015 relative to this year.” 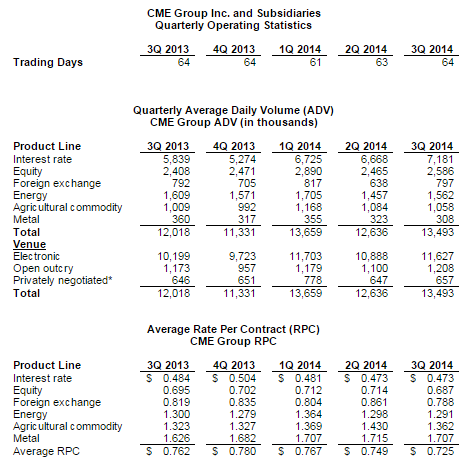