The Chinese media has once again set out to warn the local public of the perils of forex trading, this time as a direct response to an industry event taking place in the world’s most populated country, whose lucrative potential attracts many western players.

The Shanghai TV Channel, part of the powerful Shanghai Media Group and one of the most viewed channels in the all-important financial hub, aired a two-minute segment after reportedly receiving multiple complaints from the public about several brands.

The broadcast presented traders who attended the 12th Shanghai International Money Fair, an industry event in which personal investors account for roughly a third of the visitors. Protesters claiming to have lost millions of RMB worth in trades were interviewed, accusing their brokers of manipulating them into incurring massive losses. One of them, confiding that he had personally lost a million RMB, burst into tears on camera.

The demonstrators were also seen hanging warning signs showing the websites of brands they had traded with, such as the Hong Kong-based bullion broker, 24k.hk. The segment has also dedicated attention to Cyprus-based FXTM, focusing on its booth at the event and the company’s website.

In the exhibition hall, however, the rage was directed mainly towards GWFX.com, a Chinese brand belonging to the global Goldenway group, whose UK subsidiary holds an FCA license.

Protesters crowded the brand’s booth and painted defaming graffiti. Witnesses who attended the event told Forex Magnates that at one point police officers arrived at the confrontation area.

The affair did not go unnoticed by the event’s organizers. Towards the end of the news report, the conference’s director, Ms. Zhang, was featured stating that the organizers will “enforce the investor’s trading risk control.”

FXTM, an established broker regulated in both Cyprus and the UK, maintains that the allegations are at best old news:

“FXTM is aware of the issues that have been raised by some former business associates, which have already been thoroughly investigated and addressed with the individuals as part of our comprehensive process for managing complaints,” the company stated to Forex Magnates. 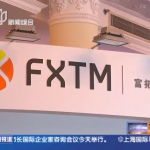 “It appears that these associates are not interested in resolving their concerns with FXTM and as such we understand that this may be an elaborate attempt to tarnish the good name of FXTM as a trusted firm committed to providing outstanding trading services and support.”

The company also expressed its disappointment with the conference’s organization, which should have had “precautionary measures in place to safeguard the quality of their event.”

“It is also our firm belief that the organizers should not have exposed their exhibitors without first verifying the information,” the statement added.

Convinced that the recorded protest might have been “an elaborate attempt to tarnish the company’s good name,” FXTM is currently “exploring the legal options that are available to us in regards to this attempt and intend to take legal action against those responsible.”

Forex Magnates will keep on reporting as new developments take place. The full segment can be found here.

This is not the first time that forex trading and brokers have been scrutinized by the Chinese TV. In July, the state-operated China Central Television warned against forex trading, showcasing stories of local traders who ran into problems with their brokers, most notably SFX and IFX Markets.

Two month ago, a Shenzhen channel aired a 20 minute expose on the operations of IronFX, accusing them of swindling their Chinese IBs and operating with no permit on mainland China.

Coming but to an earlier comment i made below ie that everybody is the same, including FXTM that seems to lead the scamming business along with the below multi-penalized brokers The biggest, most regulated and listed broker received more fines than any other broker for all reasons possible: FXCM 1. FXCM UK Announces $16.9 Million Settlement with FCA for Asymmetric Slippage – See more at: http://forexmagnates.com/?s=fxcm+fine#sthash.eDm7xvsC.dpuf 2. Breaking: FXCM Faces $200,000 Fine for NFA Breaches – See more at: http://forexmagnates.com/?s=fxcm+fine#sthash.eDm7xvsC.dpuf 3. NFA fines FXCM $2 million for slippage malpractices, FXCM will credit clients back – See more at: http://forexmagnates.com/?s=fxcm+fine#sthash.eDm7xvsC.dpuf 4.… Read more »

Heard that FXTM let go of their China sales Manager following this incident.

FXTM? Hey, don´t say anything about a company that offers up to 1:1000 in “powerful leverage” (original advertising from their homepage)!!!! Who doesn´t like 1:1000 leverage? Maybe amateurs? :=)

Heard also that their CMO Stylianou got kicked out as well. How come forexmagnates is not picking up on the story like it does for other firms gossip???

@Mike Couldn’t agree more! A graphic designer that became CMO overnight… FXTM/Alpari check before you hire next time…. So I guess FXTM is on the prowl again! Time to put those billboards outside other FX brokers offices!!