The Bank of International Settlements has issued its quarterly review of international banking and financial markets services and confirmed that the foreign exchange market still maintains its second spot in the global OTC derivatives space. With the end of 2013 marking FX derivatives to constitute 10% of the total, the notional amount of foreign exchange contracts has totaled $71 trillion.

Half of the total volume was attributed to forwards and swaps, which is not a big change from previous reporting periods, however the number of currency swaps has taken the largest part. This can be partly attributed to the fact that there has been no material crisis news, and typically, longer maturity instruments have logically taken a bigger market share. 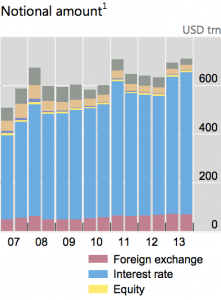 The long-term thinking that the market participants in the OTC FX derivatives space are demonstrating can also explain the lower volatility and subsequently lower volumes which we have observed lately.

Inter-dealer contracts have taken almost as much activity as contracts with different financial institutions. Among reporting dealers, the notional amount has totaled $31 billion, while inter-dealer activity has been most active in the Japanese yen and US dollar markets, with 52% and 47% respectively.

If we have a look at the inter-dealer activity for different contracts, they have been increasing their share in currency swaps – currently at 54% of notional volumes and 49% for FX options. While the 2013 BIS Triennial Survey pointed out that smaller banks, institutional traders and hedge funds have accounted for the bulk of growth in the FX market, the semi-annual report gives more market share to the inter-dealers.

While the first batch is responsible for the bulk of volumes in simple financial instruments such as spot and forward deals, the inter-dealer market is dominating the longer-term complex financial instruments like currency swaps. That shows that overall low major FX volatility has attracted longer-term investors with the average maturity of contracts traded by inter-dealers coming to 5 years.

We are not here to state boldly that the FX market is headed for another period of slow and boring carry trading as it had been trading for the most part between 2004 and 2007, however, cyclicality is an integral part of the FX market (and of any market for that matter), and future forecasts cannot fully dismiss this possibility which could drastically affect market makers and FX brokerages around the globe, and especially those which are tightly regulated and face higher operating costs.

Share this article
Tags: Bis / options
Got a news tip? Let Us Know