Recently, financial news has been flooded with headlines of China’s market crash. But what exactly caused this event to happen?

Since June, over $3.25 trillion dollars has been lost in the Chinese market crash. Most of that money was lost by ordinary Chinese citizens. In retrospect, the fact that retail investors held most of the stocks in China may have played a major role in the crash.

Of all of the major markets in the world, the Chinese market is unique in that 85% of investors in the Chinese securities market are retail investors. That figure compares to 38% in the US. Additionally, retail investors have a tendency to trade more frequently, with 81% stating that they trade at least once a month.

The vast majority of the new Chinese investors have no prior education or experience in investing, and often simply follow the crowd, buying when the market performs well and selling when it does not. This mentality, along with frequent trading amplifies movements in the market, with the most recent more than doubling on the Shanghai Composite Index from November 2014 to June 2015 and subsequent 30% crash being no exception.

There is a plethora of reasons contributing to why China has such a disproportionately high amount of retail investors. Chinese culture and the euphoria of high economic growth are recent attributing factors. Another key factor is government regulation of institutional firms; specifically to foreign investors.

Foreign investors now make up roughly 1.5% of the total amount of money invested in the Chinese market

The isolation of the Chinese market allowed it to be relatively unaffected during the Asian market crisis of 1997. However, the Chinese government has recently been releasing its capital control in an effort to encourage domestic investment. An example is the approval of margin investing in 2010. During the recent market rally and fall, the government attributed margin trading as a contributing factor affecting stocks. As a result, once prices began to fall in June, the Chinese government began to clamp down on margin investing.

In addition to the margin regulation, the People’s Bank of China cut interest rates in an effort to fuel growth when the economy slowed in November of 2014. The rate cuts became an initial catalyst for higher stock prices, as it led to positive economic sentiment. The decrease in interest rates also attributed to lower expenses for margin investing. 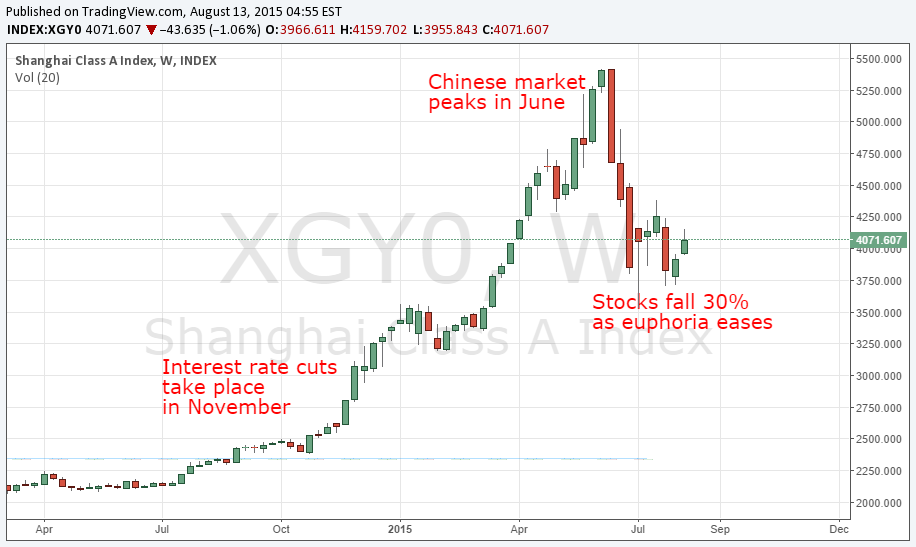 During the recent crash, the government once again slashed interest rates in an effort to rescue the market and return some of the demand that had helped trigger the initial rally that began in November 2014.

Quite simply, growth had already been slowing by the end of 2014, and the government’s attempts at revitalizing it and sustaining market growth may have played a role in building the market up for the crash.

hindsight is always 20/20. tell me which one will double next…

China is a major buying opportunity, once the charts start showing a bit of sideways movement with ranging volatility.

Such moments come once after 5 to 10 years.