LendingClub issued its Q2 financial after the close yesterday. The results showed that the firm continues to see strong growth of transaction volume on its P2P lending platform since going public at the end of 2014. During the quarter, $1.912 billion in loans were originated on the platform, 90% above the $1.006 billion figure in the same period during 2014.

The increase in loan volumes had a direct effect on LendingClub’s top line revenues and EBITDA. For the quarter, revenues grew 98% compared to 2014 to $96.1 million, as EBITDA was reported at $13.4 million. However, bottom line net income continued to be in the red and was reported at a loss of $4.14 million, an improvement of the $9.187 million loss in Q2 2014.

As part of their Q2 report, LendingClub also announced improved forecasts for the rest of 2015. Overall, for the year, the firm expects to achieve revenues of $405 to $409 million and EBITDA in the range of $49 to $53 million. The figures were boosted from previous expectations of $385 to $392 million in revenues and EBITDA of $40 to $46 million.

Beating analyst estimates of $91.6 million in revenue and boosting 2015 forecasts, shares of LendingClub were 5% higher to $14.50 in after hours trading yesterday. The expected move higher in LendingClub shares when market open comes as the P2P lender’s stock has been under pressure for most of 2015. 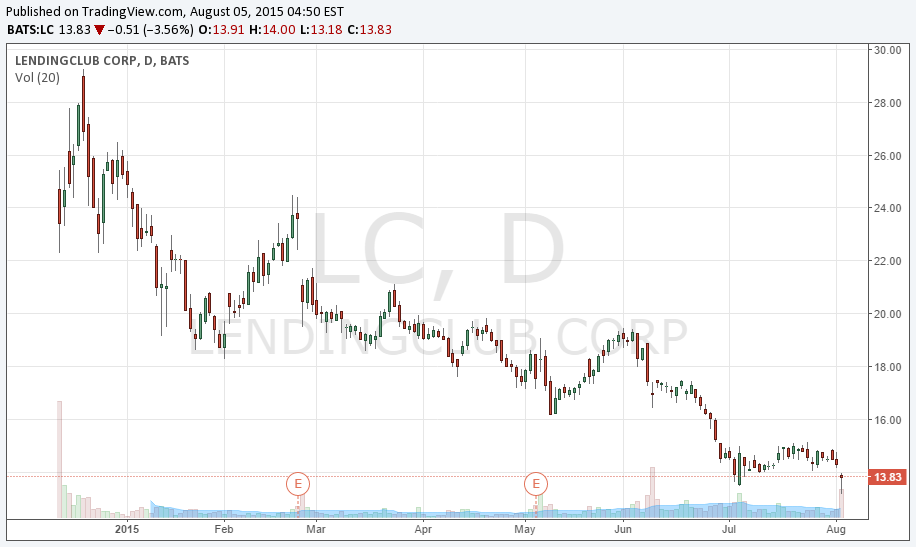 After going public in December, and seeing greater than expected demand for its IPO, shares of LendingClub hit a closing high of nearly $28 shortly after the firm went public. However, worries of high costs of acquisition to onboard new clients as well as valuations of the stock at around 20 times expected 2015 revenues, led shares of LendingClub to lose their luster in 2015 as they became a popular short-selling candidate. According to data from Nasdaq, as of July 15th, LendingClub short interest was 37,965,814 shares, compared to 11,148,478 shares at the end of January.