Shares of Bitcoin Investment Trust (BIT), which represent the traded value of bitcoin (BTC/USD), declined to within 6% of fair value- challenging their lowest premiums to date.

Units of the fund, when originally launched, represented one tenth of a bitcoin (accounting for the annual management fee of 2%, units now represent 0.09604763 BTC). The shares became the first publicly traded investment vehicle in bitcoin, gaining approval in March and debuting for trade in early May on the US OTC Markets (OTCMKTS: GBTC).

The shares are sponsored by Grayscale Investments, a subsidiary of Barry Silbert’s Digital Currency Group, which has managed BIT since it was private.

The number of shares available for secondary trade is limited. When they debuted for public trade, investors paid huge premiums to get their hands on them. In the first few days, investors were paying in the neighborhood of $50 per share- roughly double the value of the bitcoin they’re coming to represent, which was worth $240-250 at the time.

Investors were willing to pay top dollar for the privilege of owning some “regulated bitcoin”, for which they need not worry about private keys, wallets and hackers. There were even claims of early trades with premiums as high as 450%, though even if true, much of the “outlier” data was not officially recorded. 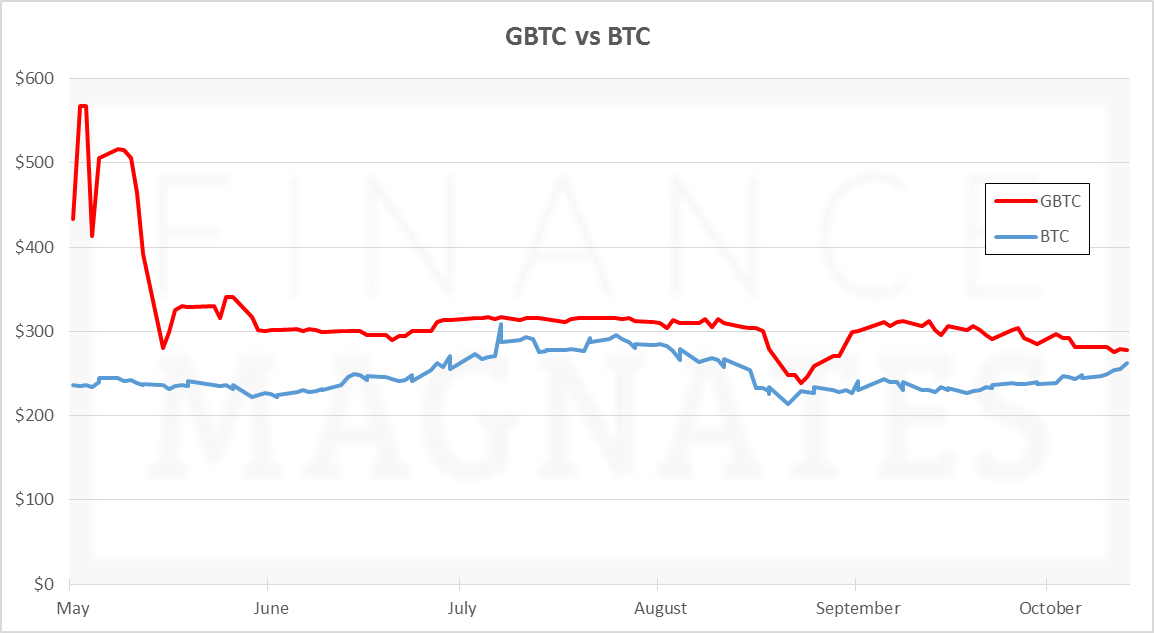 Later in May, the gap shrunk quickly when shares of GBTC plunged by nearly 30% in a single session, briefly bringing them to within 20% of fair value.

Typical premiums have since hovered in the range of 10-25%.

In today’s trading, bitcoin broke through $260 on its way to a high of $267. Shortly after the US equity markets opened, shares of GBTC declined to $26.70. At the time, GBTC was within 6% of bitcoin’s value- challenging its lowest premiums since going public. GBTC later shot up to $27.75 and is currently trading at $27.47- a 7.3% premium over bitcoin’s value. 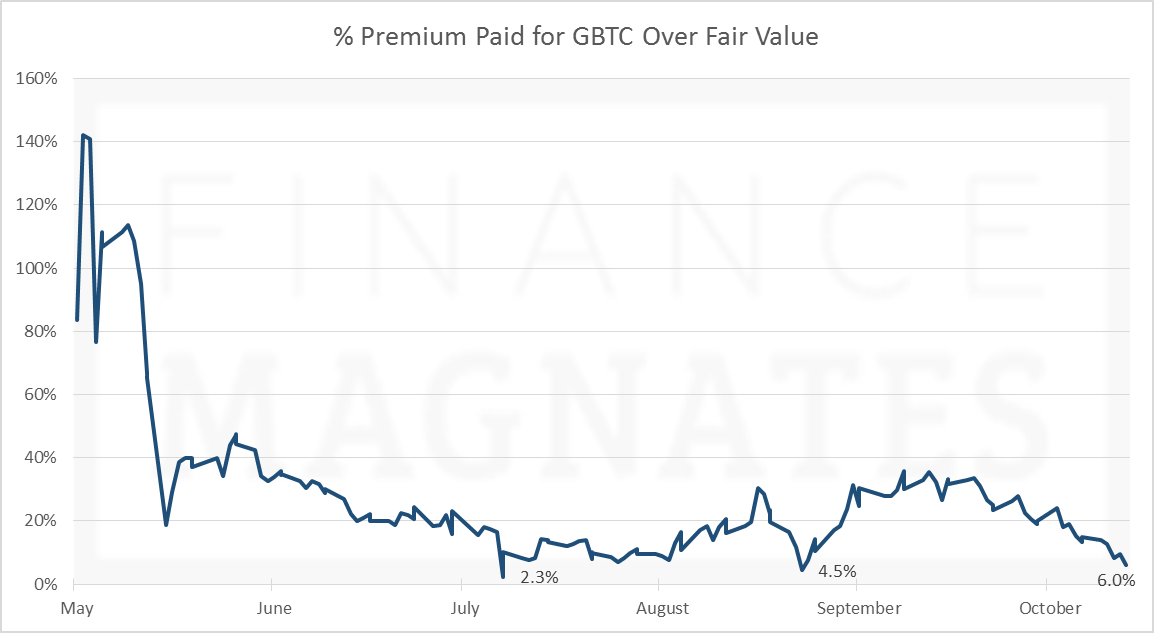 The trend throughout October has been one of convergence, a further indication that the shares are no longer such a hot commodity.

Looking at the second graph, there have actually been two instances when premiums were lower than today’s. In early July, the premium technically fell to 2.3%. However, as evident from the first chart, recall that bitcoin itself trades 24/7, while shares of GBTC only trade during market hours Monday to Friday. The instance in early July was at the peak of the latest Greece debt crisis, and bitcoin soared through $300 in weekend trading (while GBTC lay dormant) when it appeared that no deal would be reached with euro zone members. A deal was reached hours later, sending bitcoin tumbling, and everything realigned when the markets opened Monday morning.

The other instance, in late August, was also a period of extraordinary circumstances. Global equity markets were undergoing some of the most volatile trading since the financial crisis and dragged down bitcoin. GBTC approached to within 4.5% of bitcoin’s value, but later diverged back to the 15-25% range.

If this month’s trend holds, the conclusion will be that investors are no longer finding extraordinary value in GBTC. This could be for any number of reasons. It may be that prices were inflated during the initial hype, and have required several months to cool off, as is common with hyped shares in the technology sectors.

In addition, several new kids are on the block, and more are coming. Shares of Bitcoin Tracker One, an exchange traded note (ETN) traded on the Stockholm Stock Exchange, debuted not long after those of BIT. If it helps, the instrument was added by Interactive Brokers.

Since then, two bitcoin exchanges- itBit and Gemini– have become regulated as financial institutions by the New York Department of Financial Services (NYDFS), which granted them trust charters. These venues can potentially offer bitcoin investors the same peace of mind on the security of their holdings as GBTC- especially for those picky enough to avoid the OTC markets.

As the phenomenon of regulated bitcoin trading emerges, the markets for bitcoin and their related instruments are likely to become more efficient.

As a side note, Wedbush Securities pinned a $40 12-month price target on GBTC shares in July. This represents a 50% premium to today’s prices. It happens to be that Wedbush’s report came out close to the peak of the Greece crisis, when GBTC premiums were low. But during the weeks before and after, the premium was hovering in the range of 10-25%.

Interestingly, however, Wedbush’s price target was based on an anticipated bitcoin price of $400, meaning no premium was taken into account. Assuming the era of near-zero premiums continues, it will be a slightly tougher climb for GBTC investors.

Correction: An earlier version of this article stated that each share of GBTC represents one tenth of a bitcoin. In fact, the value was originally 0.1 BTC, but accounting for the 2% management fee, has been decreasing periodically and is currently 0.09604763 BTC. The figures in the article have been recalculated accordingly. GBTC’s premium on October 16 approached 6% of fair value, not 2%.

However, the ~0.8% reduction in GBTC value between May and October that is attributable to the 2% fee is still grossly insufficient to account for the total reduction in GBTC’s relative value, as observed on the revised charts. The article’s claim of historically low premium levels therefore remains unchanged.

Just for the sake of accuracy; one share of GBTC is *not* equal to 0.1 bitcoins. It is actually worth 0.0965 and will continue to fall over time as the annual 2% fee is deducted from the share value.

Just for the sake of accuracy; one share of GBTC is *not* equal to 0.1 bitcoins. It is actually worth 0.0965 and will continue to fall over time as the annual 2% fee is deducted from the share value.