With all the recent focus by both cyber security firms and established mainstream Bitcoin firms on fighting anonymity on the Bitcoin Blockchain it is no surprise that more libertarian solutions have emerged. Currently benefiting the most from this trend is the cryptocurrency Monero (XMR) that is enjoying unprecedented growth in value.

Monero is now traded at around $9.5 (0.0164 BTC) giving it’s overall circulation a total market capitalization of over $120 million. This puts Monero in the top five most valuable cryptocurrencies, shooting past the social media token Steem at $115 million and just behind the original altcoin Litecoin at $180 million.

Supporting the recent rise of Monero are exceptionally high trading volumes – at about $55 million in trades a day – well above Ethereum, Litecoin and any other altcoin. The interest started after a couple of darknet websites announced support for the cryptocurrency last week, most notably among those – Alphabay Market – a clandestine shop operating on the Tor network best known for acquiring illegal drugs, stolen Uber accounts and similar products.

Since than Monero’s price advanced around 220% in just seven days, of which about 20% was in the last twenty-four hours alone. It needs to be said that no one knows the holdings, positions and intentions of those who stand behind these darknet websites and therefore what is their angle here. There are other more established privacy-focused cryptocurrencies, such as Dash, which they could have adopted before promoting a lesser known alternative. Obviously we will only know if it is another pump and dump scheme if they start selling their XMR wholesale, crashing the price.

Charles Hayter, the CEO of CryptoCompare.com, commented: “Monero’s innovative privacy features give it an edge in the dark markets where anonymity is of paramount importance. Dark markets adopting it as a payment mechanism give it utility and a nod of approval. Monero’s rise will be a headache for regulators and law enforcement the world over.” 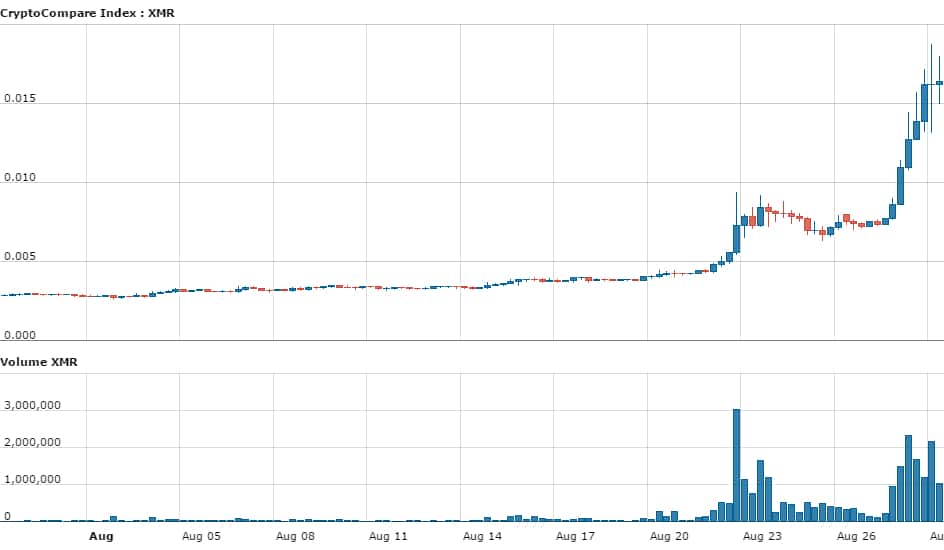