On October 11, a blog post on Coinbase’ official company blog announced the launch of ZRX on Coinbase Pro, its professional trading platform. Coinbase Pro users are now able to deposit ZRX; Coinbase said that ZRX trading will be enabled when ‘sufficient liquidity’ has been attained.

“One of the most common requests we receive from customers is to be able to trade more assets on our platform,” the blog post said, adding that “with the recent announcement of our new listing process, our customers can expect us to list most assets over time that meet our standards.

ZRX is launching on Coinbase Pro! The ZRX/USD, ZRX/BTC, and ZRX/EUR order books have entered transfer-only mode. Traders can deposit ZRX, but cannot yet place or fill orders. Order books will remain in transfer-only mode for at least 12 hours. https://t.co/SomOUqoXhv

ZRX will also eventually be added for trading on the Coinbase app. “ZRX is not yet available through the coinbase.com website and in the Coinbase iOS and Android apps. We will make a separate announcement when that occurs,” said the blog post.

According to a report by Bitcoinist, some voices in the cryptocurrency community were somewhat surprised that ZRX was added to Coinbase Pro instead of Paradex, Coinbase’ decentralized exchange. Paradex completed a full migration onto the 0x protocol on October 9. (0x is the protocol associated with the ZRX token.)

The price of ZRX briefly spiked in the wake of the announcement. 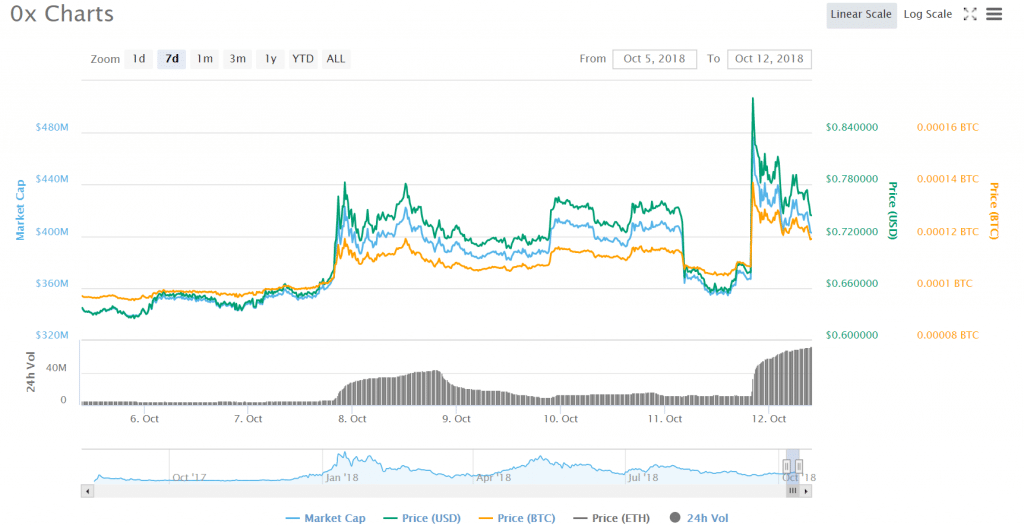 Coinbase Expands with New Assets Across its Products

Last month, Coinbase revealed a new listing process for tokens that was launched in an attempt to diversify its order books. “Our goal is to rapidly list all assets that meet our standards and are compliant with local law, while providing our customers with the tools to discover, evaluate, trade, and use digital assets,” said an official company statement. The new process reportedly begins with an application for coin issuers.

Today we’re announcing a new listing process that will allow us to rapidly add most digital assets that meets our standards and are compliant with local law, while providing our customers with the tools to discover, evaluate, trade, and use digital assets: https://t.co/6AteNMOnYr

Coinbase also announced in early August that it was considering the addition of more than 37 new assets to its custodial service, including XRP, EOS, and XMR. The announcement stressed that the assets would be added ‘for storage only’, and that the process would be completed ‘as quickly and safely as possible.’

The post announcing the consideration of new assets on the custodial service stated that the announcement was made publicly and internally at the same time “to remain transparent with our customers about support for future assets.” Coinbase was hit by a lawsuit earlier this year alleging that Coinbase employees had engaged in insider trading around the addition of Bitcoin Cash to the platform.