As funding into cryptocurrency technology increases, with about $1 billion in funding received since 2009, it becomes both more important and more difficult to follow. Coming to the rescue is BlockchainBriefing, a distributed ledger technology information portal, which is launching ChainHQ, a searchable database for blockchain developments.

The service provides intelligence on which startup companies are getting funded, the market landscape and the legal context to ledger technology. The company says that the database, which can be searched via industry-specific keywords or company name, follows hundreds of blockchain technology firms and will be updated on a weekly basis.

David Morgan, founder and CEO of ComplianceOnline, commented: “Through BlockchainBriefing we have witnessed the continued interest and activity within the blockchain industry. This new directory demonstrates our continued commitment to provide clients with the only news and information source they require to access critical and impartial business intelligence to keep abreast of blockchain developments.”

At the launch announcement, the company also released an infographic and analysis of its data showing that computer hardware firm 21 Inc leads the industry, with $121 million received in funding since its inception in 2013, followed by Coinbase with $105 million in funding. Funding has increased exponentially over the last few years, with the majority of the top 20 funded companies founded in 2011 onwards. However, only BitFury, Circle and Coinbase have completed Series C funding, with the majority of companies still in the early rounds of funding highlighting the opportunities ahead for further investment, according to ChainHQ. 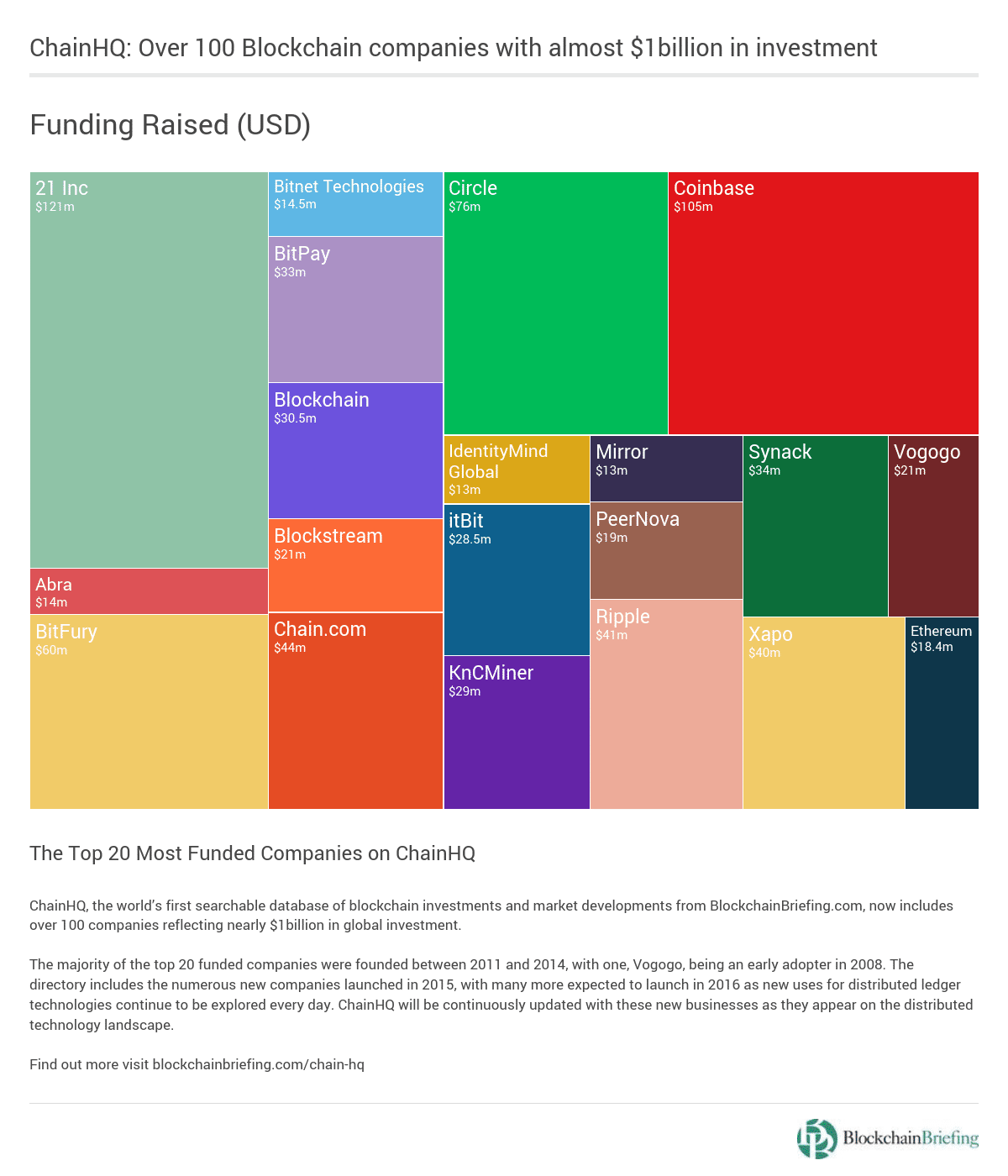 Share this article
Tags: Funding
Got a news tip? Let Us Know

Is there an app to keep track of the bit coin or bit chain funding ??

Do you really have to call yourselves the biggest and the best when you come out of the blocks? Actually there’s a free crowdsourced directory of some 240 Blockchain startups here. https://www.blockstars.io/ecos… …and plenty of news and video about Blockchain for free and not behind a paywall at Blockchain News at http://www.the-blockchain.com … along with a ‘free’ directory of over 100 Blockchain whitepapers and academic papers (from 2015) here http://www.the-blockchain.com/… Putting all your intel behind a paywall sucks… particularly in a nascent sector that has its roots in open source ethos. This is not the payment compliancy industry guys (whom… Read more »