Singapore, Sweden, the UK, the Netherlands, Canada–over the past several years, all of these countries have been increasingly identified as the world’s most prominent fintech hubs.

However, the fintech industry is growing so quickly that there is a need to continuously expand the network of industry’s epicenters, particularly in the Association of Southeast Asian Nations (ASEAN) region.

As such, Malaysia–though it has played a rather minor role on the global fintech stage–has been identified as a possible location for the fintech industry to further establish itself.

Of course, the country isn’t there yet– “I don’t think that Malaysia has established itself as a global fintech hub yet, but it has become an increasingly attractive destination for fintech companies in ASEAN,” wrote Ella Qiang, a manager of the Bitcoin Association’s Southeast Asia operations.

However, there is room for growth: “with a relatively large unbanked and underbanked population, coupled with high rates of smartphone penetration, the country presents an attractive market for new fintech companies entering in order to provide services that traditional financial institutions are not offering,” Qiang explained. “In my view, payments, retail banking, and remittances are some of the areas where fintech companies in Malaysia have the most potential to disrupt the incumbent.”

What does Malaysia have going for it? And how can the country continue to grow?

Rated highly for “business dynamism” and

The country, which sits just above Singapore’s northernmost border, was ranked as the 27th most competitive country in the world in the World Economic Forum’s 2019 Global Competitiveness Report. The country also ranked as having the 15th-best financial system in the world, and was rated 18th in terms of “business dynamism.”

The country is also ranked 32nd out of 139 countries on the World Economic Forum’s Network Readiness Index (NRI), which ranks countries in terms o how ready they are to transition to a digitized economy and society.

While the GDP per capita of a Singaporean citizen is roughly six times that of a Malaysian citizen, the growth of the tech industry in Malaysia is said to have spurred a large portion of the country’s GDP per capita growth, particularly over the last several years (although it should be noted that COVID-19 has been predicted to slow the growth of Malaysia’s GDP.) 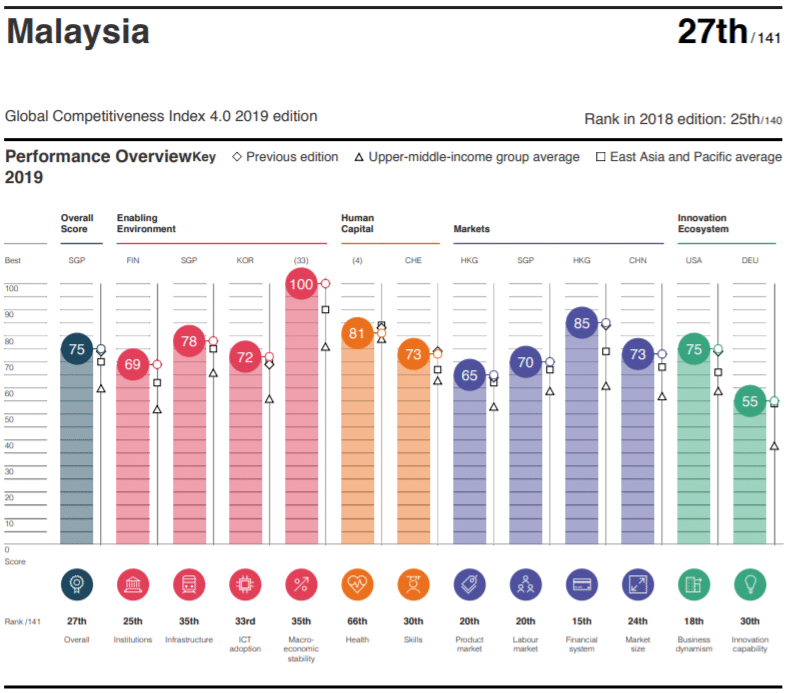 These high rankings and the increase in GDP growth seem to be very closely linked to the growth of Malaysia’s tech sector: Ibrahim Rohman, a research fellow at the United Nations University, wrote in mid-2018 that a 5.8% spike in the country’s GDP in 2017 was “the direct result of Malaysia’s 20-year investment in the information and communication technology sector.”

And spending is slated to increase: the New Straits Times reported in October 2019 that “[Malaysia’s] 2020 Budget demonstrates that the local technology industry is continuing to get much attention from the government, which is intent on further boosting the capabilities of local SMEs and start-ups, strengthening digital content, embracing digitization, enhancing e-commerce, and adopting 5G technology.”

But the government’s investment in Malaysia’s tech sector isn’t the only reason for the country’s upward movement.

Some analysts have also theorized that part of the reason for Malaysia’s growing tech industry could be the country’s geographical position–sitting just above Singapore, Malaysia sits in the heart of the APAC region. Therefore, Zico Law writes that the location is “ideal for international business and financial centre…due to it being geographically close and within similar time zones with most Asian countries,” and that “it is also easily accessible through flights.”

Indeed, Ram Krishnna Rao, chief executive and co-founder of blockchain-based gold jewelry platform MarketOrders, told Finance Magnates that “geographically, [Malaysia is] located close to where the innovation is happening in this space: Singapore, China, Hong Kong and Korea, [which] all have been leading the way when it comes to Fintech innovations including blockchain and cryptocurrencies.”

Rao also pointed out that the country is also becoming increasingly attractive to Western countries who have an interest in finding a low-cost workforce: “We are seeing an increasing number of western companies utilising the tech talent in Asian countries where the population is increasingly becoming English fluent and the tech pool is growing and cheaper to employ,” he said.

Indeed, “as a Malaysian myself, I have seen the country as a whole and its people start to become aware of the Fintech opportunities available to them,” Rao commented.

This also goes for potential users of fintech products and platforms–data from German statistics company Statista shows that mobile phone usage in Malaysia has steadily climbed each year, with roughly two-thirds of the country’s population carrying at least one mobile phone. Therefore, the potential for the use of payment apps and other kinds of fintech applications seems to be growing stronger each year.

Additionally, the International Monetary Fund (IMF) recently reported that internet banking in Malaysia has quadrupled in the last decade, reaching over the 90 percent-range in usage in 2018. The publication also said that “mobile banking is also booming, supported by near-universal 4G network coverage, affordable data, and 5G is in the works.”

According to the IMF, ost of the country’s fintech usage is on digital payment platforms and mobile wallets, while “insurtech,” lending, cryptocurrency, digital remittances, crowdfunding, digital Know-Your-Customer processes, and other forms of financial technology follow. 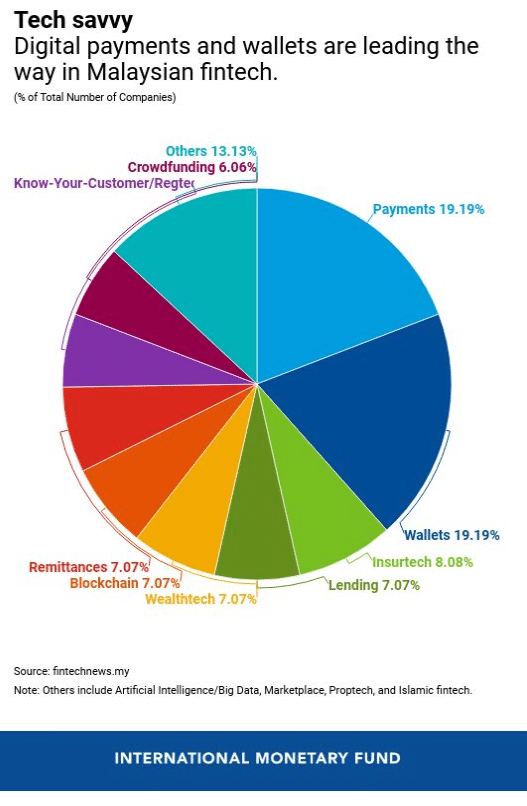 Of course, technological advances are also boosting business in Malaysia–” the infrastructure is also being developed with an increasing number of co-working spaces, good internet connectivity and the introduction of Digital Free Trade Zone (‘DFTZ’) by the Malaysian Government in 2017 to help local businesses export goods printing those in e-commerce,” Rao said.

Indeed, according to the Malaysian government’s website, the DFTZ is “initiative to capitalize on the confluence and exponential growth of the internet economy and cross-border eCommerce activities.”

“The DFTZ is set up to facilitate seamless cross-border trade and enable local businesses to export their goods with a priority for eCommerce,” the website explains.

Ella Qiang pointed out that “Bank Negara Malaysia, the central bank of Malaysia, launched a financial technology regulatory sandbox framework that provides a safe environment for fintech companies to test and grow” in 2016.

At the time that the sandbox was launched, Aznan Abdul Aziz, Chairman of Financial Technology Enabler Group, said that “the Framework reflects the Bank’s long-standing policy in striking an optimal balance between promoting innovation whilst preserving financial stability and protecting consumer interest.”

Qiang explained that through the sandbox, “admitted fintech companies are able to deploy products and services that are not well addressed under prevailing laws, doing so within a controlled environment and with regulatory guidance.”

Additionally, she pointed out that Malaysia has introduced legislation that is specific to the cryptocurrency sector: “the Capital Market and Services Order was issued by the Securities Commission of Malaysia last year, providing a regulatory framework for digital currency and tokens. Licensing schemes were set up for digital assets trading platforms in Malaysia too, in order to further regulate digital asset trading activities.”

Both Qiang and Rao also pointed out that Malaysia has the potential to become a global hub for Islamic finance.

In fact, “Malaysia has [already] been the center of innovation for Islamic finance,” Qiang told Finance Magnates. “With the growing Islamic population domestically, in addition to that of its neighboring country Indonesia, Malaysia has a particular geopolitical advantage to be the fintech hub for Sharia-compliant finance infrastructure and products.”

Indeed, in 2018, Thomson Reuters’ Islamic Finance Development Report showed that Malaysia was a leader among Islamic finance institutions in 56 countries, a title that it had earned in the past as well.

While the Islamic Finance market may seem rather “niche” to much of the world, the Islamic financial industry is continuously growing. The industry follows principles that are written in sharia law. According to Forbes, modern Sharia business practices began to take shape in the mid-20th century, encouraged by the independence and increasing prosperity of majority-Muslim nations.

For example, in 2018, Reuters reported that Malaysia remains the world’s largest market for “Sukuk,” or Islamic bonds.” And the market is large–outstanding Sukuk deals added up to $426 billion in 2017 alone.

And the demand for Sukuk, as well as other Islamic Financial products, is continuously growing: Forbes reported that Sharia-compliant assets worldwide were recently pegged at over $2.4 trillion, compared to just $200 billion in 2003. Thomson Reuters predicts that by 2022, that figure is projected to grow to $3.8 trillion, with fintech ventures expected to drive much of the growth.

Indeed, the International Monetary Fund reported in February that “Islamic bank loan growth in the country expanded by 8.9 percent in 2018, compared to 2.5 percent for conventional banks.”

There are already some prominent Islamic Finance fintech providers in the ASEAN region, including Singapore-based Ethis, which runs a number of Sharia-compliant crowdfunding platforms. Two other Indonesia-based platforms, Investree and Ammana, offer solutions for business financing needs.

If Malaysia can manage to beef up its fintech offerings for Islamic Finance, the country could come much closer to its goals of becoming a higher-income nation: not only are roughly 19.5 million of Malaysia’s approximately 30.5 million people Muslim, but more than 87% of neighboring Indonesia’s 270 million-person population is also Muslim; he vast majority of which own a cell phone, and two-thirds of which are unbanked.

What do you think about Malaysia’s potential to become a global fintech hub? Let us know in the comments below.