If you’ve been paying attention to what’s been happening in the cryptocurrency world in China over the last two years, the idea of the country creating its own stablecoin may be a little… well, unlikely.

However, the country was actually the world’s first to develop a national cryptocurrency. Since the initiative began, however, the effort appears to have gotten a little lost along the way.

China’s Moves Toward a Stablecoin

Once upon a time, China was at the forefront of the world’s cryptocurrency-related activity. Chinese residents were estimated to have been responsible for three-quarters of hashing power on the Bitcoin network and 95 percent of all Bitcoin trading volume.

All of this started to change near the end of 2017, just before the massive boom in cryptocurrency markets. The country suddenly rolled out a sweeping set of harsh bans on cryptocurrencies. By the end of the year, domestic ICOs and exchanges were declared illegal; throughout 2018, miners in various regions of China faced pressure to end their operations. 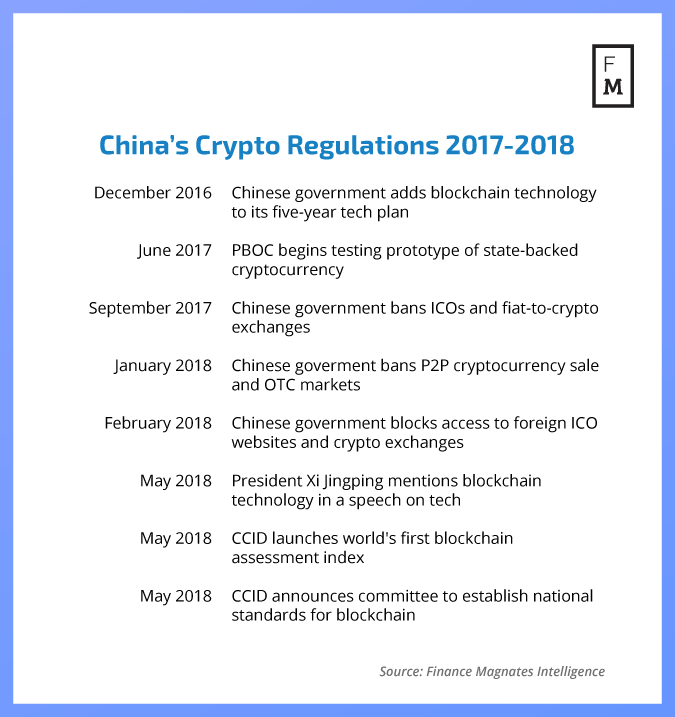 Indeed, the Chinese government seemed to see Bitcoin and other cryptocurrencies as a serious threat to its economy. Hacker Noon reported that “Chinese economic initiatives including One Belt One Road are highly dependent upon them retaining and increasing their influence over the international flow of money” – therefore, restricting something like cryptocurrency from weakening its own system may have seemed imperative to the country’s regulators.

Despite Hostility Towards Cryptocurrency, Blockchain is Thriving in China

Throughout the various stages of regulatory pressure and hostility from the Chinese government against cryptocurrency, however, the Chinese blockchain industry continued to grow and to thrive. Indeed, President Xi Jinping himself mentioned blockchain technology in a speech in May 2018 on the importance of technological development.

The same month, the China Center for Information Industry Development (CCID) Research Insitute of the Ministry of Information and Technology launched the first-ever public blockchain assessment index and announced the setup of a national set of standards for blockchain. The standards are expected to be completed by the end of this year.

In an interview conducted early last year, Head of The Floor in Hong Kong Desmond Marshall told Finance Magnates that “China has had quite a big boom in the tech sector… where people are looking very strongly into blockchain technology.”

“Of course, the popularity of Bitcoin helped in terms of people understanding what blockchain is. In terms of technology, China is actually very welcoming in terms of how these things are being applied.”

Further, “from the government itself to local provinces, down to new startup companies–pretty much anything you can think of, they have already thought about or are already in the process of developing blockchain technology to be applied in those areas.”

One of the initiatives that he spoke about was China’s proposed national cryptocurrency.

China’s National Cryptocurrency Plans Were Originally Made Public in 2017

It’s not a secret by any means that the country has been developing and testing a national cryptocurrency for some time.

In fact, reports that China was the first country in the world to create its own stablecoin appeared in the media as far back as June of 2017, when the country’s central bank, the People’s Bank of China (PBOC) reportedly developed a prototype of a national coin and tested it by sending it between commercial Chinese banks.

We need some nomenclature for “stablecoins.” Tether and MakerDAO are nothing alike.

*Peggedcoin*: A fiat-backed, fully-collateralized coin.
*Stablecoin*: A cryptoasset whose value is stabilized through algorithmic mechanisms

Other suggestions are welcome.

As the year progressed, the pressure to complete and issue the coin seemed to grow. “The development of digital economy needs central bank-issued electronic currency more than ever,” said Yao Qian, who leads research of the national cryptocurrency at PBOC, in November 2017. “It’s crucial to speed up the research and issuance.”

The Project Has Gone Nowhere

Where exactly that sense of urgency went, however, is unclear. Almost nothing has been publicly said about the possibility of national stablecoin since the end of 2017–in December of 2018, an independent researcher at PBOC published a report entitled “A Brief Analysis of Stablecoins,” which said that in the future, a national economy that will be able to compete with the rise of private stablecoins “will likely be eventually achieved by a central bank-issued fiat digital currency.”

This small piece of news may have been what spurred OKCoin Founder Star Xu to announce in October that the USA branch his company would be issuing a Yuan-backed stablecoin.

Embracing the tide of technology, the launch of a #CNY backed #stablecoin is an inevitable trend, and it will significantly improve the internationalization of the RMB. OKCoin USA will launch a fully compliant stablecoin.

There has been at least one other initiative to create a stablecoin within China. LeapRate reported in early December of 2018 that Chinese company Grand Shores Technology Group is developing a stablecoin that is expected to hit the markets in February. According to the report, the company is backed by the Chinese government of Hangzhou, the capital of the Zhejiang Province.

However, the report also said that “the digital currency is going to be pegged to the Japanese yen, rather than the Chinese yuan, and the reason for that may be the potential reaction of the Chinese central government on a locally-issued stablecoin.”

So, that effort may be a bust. However, it is certainly possible that a blockchain company could eventually lobby the Chinese government to use its own network as a basis for a national cryptocurrency.

Filipp Egorov of PR Firm the Vinci Agency told Finance Magnates that “Being a Shanghai-based company, we do often have these backroom conversations with the fund runners and government-approved blockchain projects in China.”

“The most likely scenario (in 2018 at least) was China lobbying NEO as the ‘national’ cryptocurrency. There is a strong NEO lobby in Chinese government, looking for an enforcement-backed ecosystem, isolated, transparent to the states, regulated, KYC/AML compliant, – and a stronger one aiming at further prohibition of any crypto-related activities,” he explained.

However, Egorov sees a national cryptocurrency as unlikely to happen anytime soon. “Speaking of national stablecoin, this is unlikely to happen in the foreseeable future at least, China’s view on the crypto-assets is simple: you guys are fascinated by this fintech new paradigm sandbox of yours – please, keep on going, but stay in the sandbox, no connection to the ‘real-world’ money allowed. And they are still very clear on it.”

Despite China’s apparent lack of progress on its own national cryptocurrency project, a growing number of countries have since followed in China’s footsteps and developed initiatives to create national cryptocurrencies of their own, though none of the initiatives have been seen through to completion so far (unless you count the Venezuelan Petro–which is problematic for a number of reasons.)

The potential benefits of creating a national cryptocoin are many. For example, the cost of electronic transactions would be reduced and could benefit the country as a whole rather than a private company.

Imagine: instead of using a debit card issued by Visa or Mastercard, a state- or bank-backed card could be used to pay with cryptocurrency. In the most idyllic vision of this reality, any fees associated with the transaction could go into funds that would benefit a country’s residents.

A National Cryptocurrency Could Offer a Number of Benefits–Including Control

A national cryptocurrency could also lower the barrier of entry for residents in need of financial services, like banking–low-cost e-banking options are highly accessible with cryptocurrencies. In turn, this could facilitate economic growth from the bottom up.

Some analysts have predicted that a national cryptocurrency might be particularly appealing to an entity like the Chinese government because of the possibilities to control and monitor its usage. Depending on the way that a blockchain is built, users of the network could have personal identification information attached to each and every transaction that they make with their cryptocurrency.

Indeed, PBOC researcher Yao Qian said to the South China Morning Post in 2017 that “Virtual currency is easier to trace, allowing the central bank to monitor its velocity and the whereabouts of the money and improve its monetary policies accordingly.”

Of course, this has some consequences that most people would agree are beneficial–it would be virtually impossible to counterfeit cryptocurrency, and financial crimes like money laundering would be greatly reduced.

Further, blockchain networks are incredibly secure–they are most commonly upheld by thousands of computers (nodes) spread across wide geographic locations. Therefore, altering or hacking a blockchain would require the compromise of more than 51 percent of the nodes on a network. This is highly unlikely–although the question of how exactly the nodes on a government-backed crypto network would be selected is still up in the air.

Desmond Marshall told Finance Magnates last year that the PBOC’s effort to develop a national cryptocurrency “specifically did not talk about trading, like crypto exchange trading, cryptocurrency exchanges. [They didn’t make mention of ] speculations as well.”

“To think that the PBOC did not mention this–it’s quite clear that [the message is]: ‘okay, we’re developing a digital currency, but for a very specific purpose,” he explained. “In terms of ICO [tokens], they don’t fall under ‘electronic payments’; they fall under ‘trading.’ That’s a definite no-no, and I would not expect this ban to be lifted soon.”

Has the Initiative Been Dropped?

Further, it’s unclear whether a Chinese national cryptocurrency would be open to foreign buyers to purchase or hold. Opening the coin to foreign buyers could potentially bring a wave of new investors into the Chinese economy. However, it could make regulation more difficult.

In any case, the world is watching. Has China’s initiative to build a national cryptocurrency quietly been put to the wayside? Perhaps.

But with a blockchain community as strong as China’s, some kind of infrastructure may eventually be a necessity.