Most would agree that 2019 wasn’t a big year of cryptocurrency adoption–however, the industry did come closer than it ever had before. The introduction of Facebook’s Libra, Binance’s Venus, and announcements of plans by China and other nations around the world to begin or continue developing blockchain-based national currencies brought crypto further into the “mainstream” than ever.

Adoption was also arguably boosted throughout the year by political turmoil and boosts in the price of Bitcoin, as well as increased awareness regarding personal privacy and financial sovereignty.

However, in the grand scheme of things, crypto still has a long way to go–in 2018, EOS’ chief technical officer Dan Larimer suggested that a technology does not become a part of everyday life for most people until it has been proven to make their lives easier without being high-risk or high-cost.

And indeed, there does seem to be a cyclical nature in the way that new technology is adopted into the “mainstream”–and it can take time. For example, although email was invented in the early 1970s, it did not become widely available or widely used until the 1990s, and its usage has grown considerably since then; if cryptocurrency is operating on a similar timeline, it could be ten to twenty years before it becomes truly ubiquitous.

Still, progress has been made, if reflected in nothing but the Bitcoin network alone: in the last five years, the number of Bitcoin transactions sent each day has increased dramatically, and some analysts argue that this will continue to increase in the near future.

So–here, now, in 2020–who’s actually using Bitcoin? What are they using it for? And what are the factors that are known to be hindering cryptocurrency adoption?

Let’s start with the first of these lines. There is, arguably, a major and important difference between the ways that crypto is used in countries with developed, stable economies and those without.

However, this statement is much more likely to be true for individuals living in countries with stable economies, who may not necessarily have a need to use cryptocurrency; for example, to protect the value of their savings in the face of an economic or political crisis. Instead, these users tend to go out of their way to use cryptocurrency to pay for something–perhaps something that isn’t completely essential.

For example, 2gether, a cryptocurrency payments app based in Spain, told Finance Magnates that according to a recent survey of its own users, “the everyday crypto user is a highly educated millennial male.”

Indeed, according to the results of the survey, “the majority of crypto spenders are between 26 and 45 years old”, and work in white-collar professions “the most common professions among users are lawyers, accountants, and economists. Typically, these users don’t pay for necessities, like housing or bills, with their crypto; instead, 2gether’s users “spend their cryptocurrency mostly on food and at restaurants.”

Of course, this doesn’t mean that using cryptocurrency primarily for paying for things in restaurants couldn’t eventually lead to widespread adoption, particularly within developed countries.

After all, Bakkt will test a consumer app with Starbucks in the first half of 2020, a move that may spark some additional interest in crypto from the “outside world.”

Who would have thought the next #banking icon would be the #starbucks logo? Kudos to them for teaming up with #Bakkt!#Crypto #Blockchaintechnology

Coffee Drinkers Are Shaping Next Wave of Financial Innovation As Bankers Fear the Rise of Starbucks https://t.co/tDZDQ6jsTo

Charles Phan, chief technical officer at cryptocurrency exchange Interdax, told Finance Magnates that “if the trials go well, it could be a significant event for cryptocurrency adoption.” The app, which will allow consumers to exchange bitcoin for the US Dollar at Starbucks locations, “could be the catalyst that sparks off real merchant adoption.”

Providing the right kinds of incentives could also help to boost adoption amongst merchants. Will Reeves, chief executive officer of Fold, a crypto payments platform that provides BTC rewards for users told Finance Magnates that “especially when it comes to e-commerce, crypto adoption is a two-way street, including both consumers and merchants.”

“Merchants should be highly incentivized to accept cryptocurrency payments, because doing so dramatically reduces transaction fees and chargebacks—one of the greatest sources of fraud experienced by vendors,” he said, adding that “credit card fees eat up so much of vendors’ ROI that many stores like Walmart and Target are issuing their own credit cards.”

“By offering cashback and other promotions, they encourage consumers to use their store cards over credit cards with high processing fees,” Reeves explained. Therefore, he predicts that “we will see more merchants offering bitcoin cashback for consumers using their store-specific cards this year.”

In developing countries, crypto can be a safe haven; DeFi platforms offer financial services that may be otherwise unavailable

However, in developing countries around the world, the adoption of cryptocurrency is arguably higher than in developed countries. Additionally, the portrait of the average crypto user seems to be quite different.

Charles Phan told Finance Magnates that “the main use cases for cryptocurrency are as an alternative to currencies experiencing hyperinflation, as an alternative to gold or the banking system as a store of value, and as a convenient and fast payment system to send money internationally.”

As such, “we’re increasingly seeing bitcoin and crypto used as a hedge against political and economic instability in countries like Argentina, Turkey, and Venezuela.”

Indeed, a survey from Germany-based data analytics company Statista found that Turkey has the highest number of individuals who had owned or used cryptocurrency at some point in their lifetime. 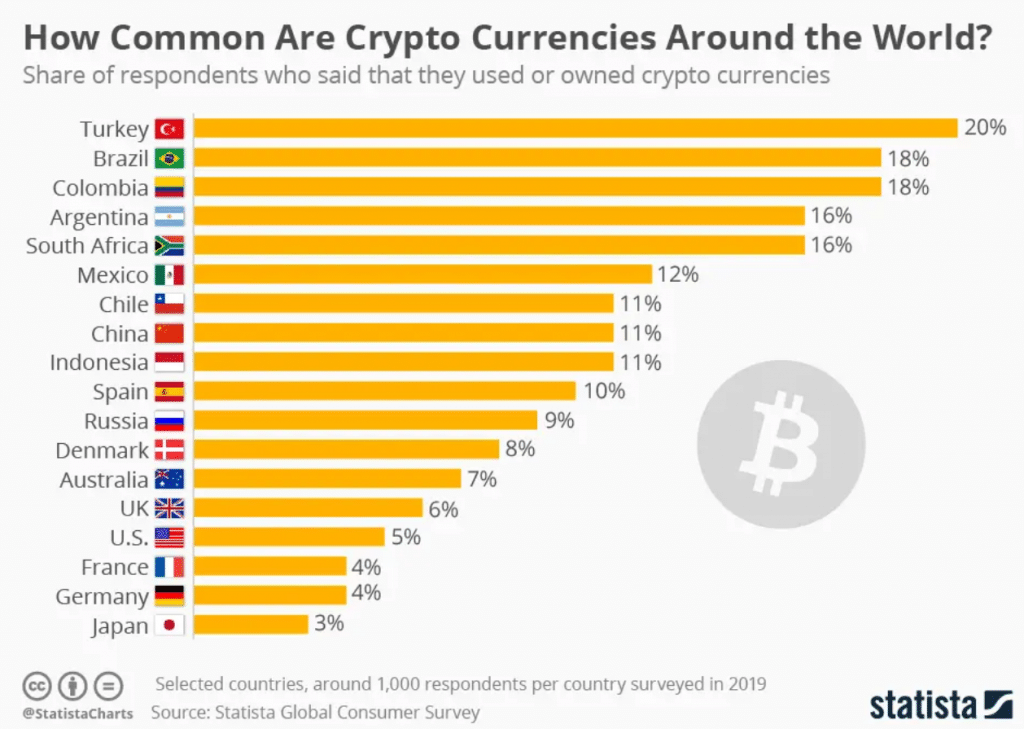 Usage of cryptocurrency in developing countries is expected to grow further as the decentralized finance (‘DeFi’) sector continues to grow.

After all, DeFi platforms–which offer financial services, including loans–are “conceptually…going after this idea that finance should be as open as the internet, “ according to Zac Prince, chief executive officer of crypto finance and lending platform BlockFi.

Prince told Finance Magnates in an interview that according to the principals of DeFi, “it doesn’t matter where you’re from or how much money you have, you should be able to access the same product that someone who’s in a different place with a lot more money is also accessing.”

Additionally, DeFi platforms “don’t do KYC (know-your-customer) [checks],” which could make it much easier for individuals in rural areas who may not have access to internationally acceptable forms of photo identification (ie passports) to gain access to the loans and other financial services offered by DeFi platforms.

Institutional capital is important to the health of crypto markets

“In developed countries, the use cases are more focused on trading and investing in crypto as a store of value,” Charles Phan told Finance Magnates.

“The biggest area of adoption in cryptocurrency is the trading of digital assets,” Phan explained. “Volume is rebounding as the cryptocurrency market exits long-term downtrend. With newer exchanges looking to make their mark in 2020, there will be more innovation and continued maturation, which will attract traders from traditional markets.”

Phan argued that an influx of traders from traditional markets–institutional traders, specifically–is quite important to the short-term health of the cryptocurrency markets, but may not be critical to the long-term survival of the crypto ecosystem: “a lot of capital has been allocated to cryptocurrency businesses and will not [survive] if the predictions of institutional adoption are not fulfilled,” he said

“However, chances are even without that, there will still be an ecosystem.”

User-friendliness is still an issue in 2020

But what’s preventing traders and users–institutional and retail–from entering the cryptosphere at a higher right?

The simple fact is that for many (or even for most), crypto remains esoteric and difficult to use and understand at a baseline level. For example, even though cryptocurrency wallets and various other kinds of platforms have come a long way from using command-line based interfaces, there is still progress to be made when it comes to making cryptocurrency easier to purchase, sell, send, receive, and trade.

Luke Stokes, Managing Director of The Foundation for Interwallet Operability (FIO), told Finance Magnates that this is a serious issue for the industry: “until we solve the usability problem of interacting with cryptocurrency itself, we can’t expect real-world adoption,” he said.

In order for cryptocurrency to be used practically, Stokes said that “it has to be as easy as Paypal, Venmo, and the like.”

Indeed, the Blockchain Usability report put together by the FIO demonstrated how frustrated most users are. According to the report, “only about 25% of respondents who sent crypto to someone else in 2018 indicated that they generally felt ‘very comfortable’ with transactions immediately after sending. The majority of users, about 58%, felt only cautiously optimistic. While the remaining 17% of users felt a general level of anxiety regarding a sent transaction.” 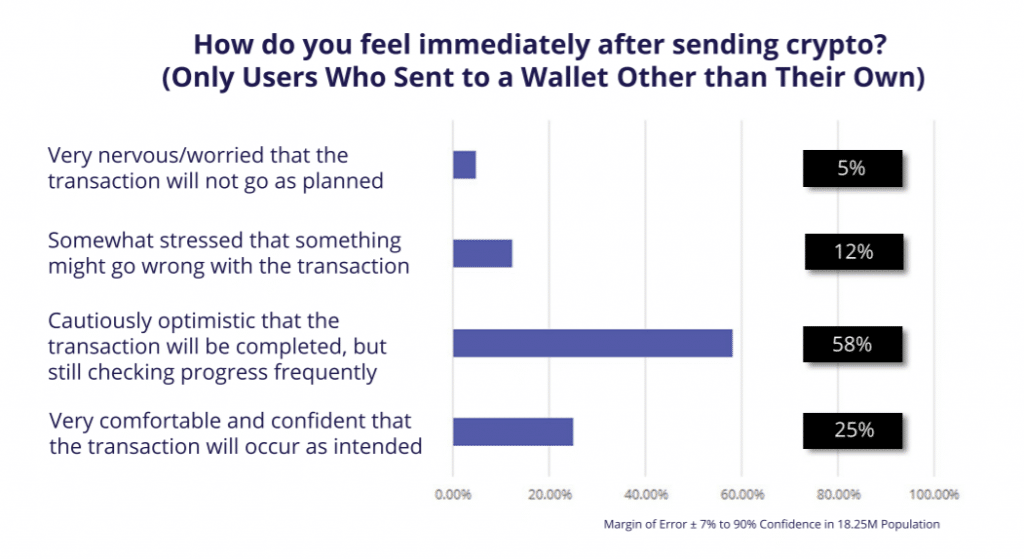 Additionally, legal concerns–particularly within the United States–could be one important factor keeping cryptocurrency adoption at bay.

Most experts would agree that the legal landscape in the US when it comes to the cryptocurrency is murky at best, and unnecessarily restrictive at worst.

However, for better or for worse, there has been progress: several pieces of cryptocurrency-related legislation are currently making their way through the US House of Congress, including two pieces of legislation that seem as though they could potentially open the door for further crypto adoption–the “Crypto-Currency Act of 2020” and the “Virtual Currency Tax Fairness Act of 2020”–and several that could possibly hinder it further, including the “Keep Big Tech Out Of Finance Act” and the “Stablecoins Are Securities Act.”

Earlier this month, Michael Wasyl, managing partner at NYC-based corporate strategy firm DeerCreek, explained to Finance Magnates that the primary function of the Act is “to definitively put every type of crypto asset under the jurisdiction of some existing department,” which, at the very least, could provide some clarity as to which regulatory bodies are responsible for crypto.

Similarly, the Virtual Currency Tax Fairness Act of 2020 could provide clarity for the crypto industry and apply a more fair and practical set of tax rules to crypto. Robert Elwood, chief operating officer and Partner at Practus LLP, told Finance Magnates that “if enacted, the bill could spur widespread adoption of cryptocurrencies by alleviating what I like to call the ‘sandwich’ problem.”

“Under current law, cryptocurrencies are treated as property, which means that every transaction leads to taxable gain or loss, even simple and small transactions like using Bitcoin to buy a sandwich,” Elwood explained. “This is a record-keeping nightmare.”

Under US law buying a meal with Bitcoin is a taxable event. I wondered why the commercial industry hadn’t warmed to it yet.

However if you’ve made a loss on your Bitcoin transactions, it could be tax deductible too, I’m guessing pic.twitter.com/ski6TXwiRY

The bill solves this problem by stipulating that “U.S. federal income tax is due on gains in cryptocurrencies only if the gain on a particular transaction is greater than $200. Accordingly, if the bill passes, using cryptocurrency for routine small transactions such as buying a sandwich would not involve the hassles of the current tax law.”

The “Keep Big Tech Out Of Finance Act” and the “Stablecoins Are Securities Act,” on the other hand, could make cryptocurrency law all the more complicated. Both pieces of legislation were written as reactionary tools to stop Facebook’s Libra from launching, but they could have a host of consequences–possibly unintended–for the industry as a whole.

However, even though negative legislation could slow the process of adoption, it’s ultimately up to the individuals who use it to determine the future of the industry of the technology. Therefore, Charles Phan says that crypto-hopefuls should keep their eyes on the prize: “Cryptocurrencies like bitcoin and ether were built on grass-roots movements from the bottom up, so continued adoption is essential for long-term survival,” he said.

“The aim of the game is to create a new financial and economic system to make the world a better place: that can only be achieved if cryptocurrency becomes part of everyday life.”