After more than a year of political campaigns and anxiety over who the next American President will be, the moment has finally arrived: on Tuesday, November 3rd, millions of Americans around the country cast their ballots for the candidate of their choice.

At press time, votes were still being counted. In addition to record turnouts for in-person voting numbers, most states have also seen record numbers of mail-in absentee ballots that were cast before election day; some analysts believe that these mail-in ballots may not be counted until several days after the election and that their effect, especially in key battleground states, could be profound.

Is the US Headed for a Contested Election?

Depending on which way the votes turn out, there is a possibility that the election results could be contested – a factor that could turn several days’ delay into several weeks, or even months. For example, earlier this week, sitting US President Donald Trump vowed to send lawyers to the state of Pennsylvania after the election is complete. Yesterday, the President said that he intended to go to the Supreme Court to intervene to stop the legitimate counting of the vote, a move that drew criticism from both sides of the aisle.

Just as the effect of a drawn-out election process could have major implications for the American government, a contested election could have significant effects on financial markets, including crypto.

Ultimately, some analysts argue that no matter who is chosen to be the next US president, deep deficits and continuous government spending could declare the real winner of this election as…

Indeed, Alex Mashinsky, Chief Executive and Founder of crypto lending and earning firm, Celsius, told Finance Magnates that in the short term, “prolonged confusion over the elections will create a very rushed drive into safety assets such as USD, Gold, and Bitcoin,” but markets will have to undergo a bit of chaos first. “Only after we first see drops in such markets as panic takes over and retail investors move assets around with no particular logic,” he said.

Therefore, Mashinsky believes that “while none of us wants Bitcoin to do what it is so precisely designed for,” which is to act as a “‘DIP’ or Doomsday Insurance Policy,” this might be precisely the role that Bitcoin will play.

Indeed, “if we have a crash of the USD or chaos as a result of contested elections,” Mashinsky said, “we will see new highs for BTC this year.” 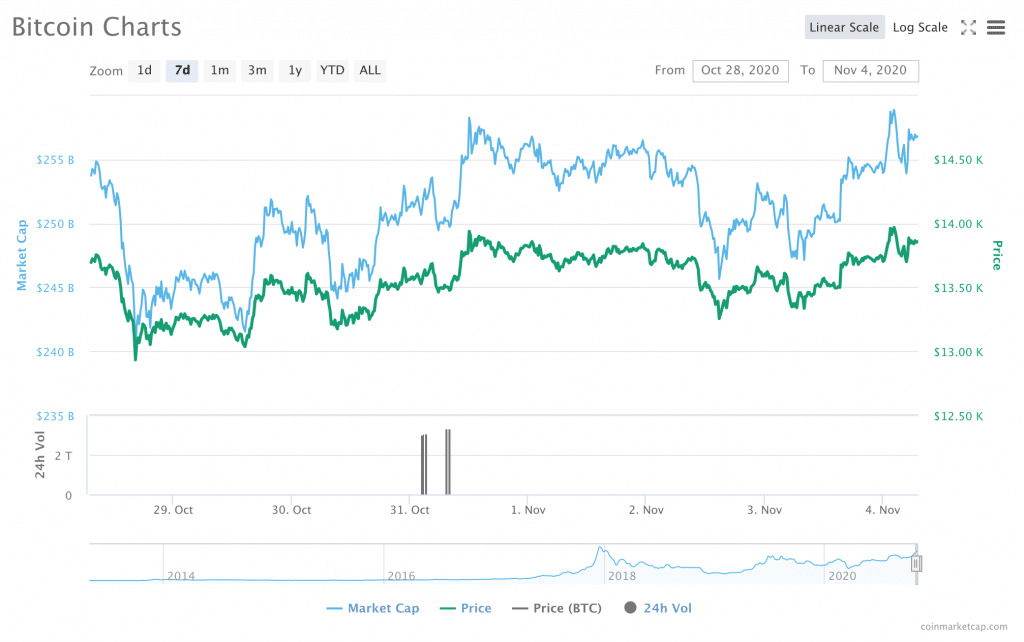 “The Worst Scenario Is One Where the Supporters of One Candidate Have Legitimate Reasons to Feel Disenfranchised.”

And unfortunately, while polling processes proceeded largely without incident yesterday, a number of analysts believe that chaos and civil unrest could indeed follow contested election results. Even the White House seems to be expecting protests, earlier this week, the perimeter of the building was surrounded in ‘non-scalable’ fencing.

“The worst scenario is one where the supporters of one candidate have legitimate reasons to feel disenfranchised,” said Monica Eaton-Cardone, Co-founder and Chief Operating Officer of cybersecurity firm Chargebacks911, to Finance Magnates.

“Perhaps it’s due to rumors of fraud, or maybe it’s because of social media posts of voter suppression. It might not even be based on anything factual. But, unfortunately, there are hardcore, violent extremists on both sides, and neither party has a monopoly on virtue and honor.”

Indeed, “from COVID to murder hornets, 2020 has been an absolutely crazy year,” Eaton-Cardone added. “The last thing we want is for the extremists on either side to be emboldened, or conclude that the only viable way to achieve political change is outside of the democratic process.”

On Civil Unrest: “When Everyone Expects the Same Thing, Something Else Happens.”

However, Graeme Moore, Head of Tokenization at security token platform, Polymath, argued that because the expectation of civil unrest has been a part of the national discussion on the election for several months, it may already be priced into financial markets, including crypto.

“As we saw earlier in the year with lockdowns and higher coronavirus cases, all markets sold off, even gold and cryptocurrency,” Graeme said to Finance Magnate. “In major risk-off moments, all risk assets can initially sell off as investors flee to cash and short term treasuries.

“However, I’d argue that many are predicting civil unrest post-election,” he continued. “Since many people have already seen the photos of businesses boarding up, and tensions are high, this leads me to believe that some level of civil unrest is priced in.

“Too many people expect it,” he said. “When everyone expects the same thing, something else happens.”

Still, “if there is civil unrest, it is good for crypto. The Fed will have to push money into the system aggressively. That would make the dollar go lower and crypto higher.”

Additionally, Noble pointed out that a contested election could already be priced into financial markets: “people expect the election to be close and vote counting to drag on for weeks or months,” he said. “An ‘upset’ will be if we know who the winner is by 11 P.M. on election night. In that case, this benefits crypto because the market can process the results quickly and then move back to the bitcoin uptrend.”

“The Crypto Market May Be Agnostic to Who Wins the Election” Because “the Fed Will Inject Money into the Financial System No Matter Who Wins.”

Some believe that no matter who is chosen as President, the economic consequences of the decision are likely to be more or less the same.

For example, Celsius’s Alex Mashinsky believes that the global economy is only beginning to suffer the real effects of the COVID-19 pandemic and that regardless of who wins, a financial storm is brewing.

“The global economy is going through a slow-motion recession as the demand for goods and services is slowing down while the central banks pump liquidity to try and reverse this trend,” Mashinsky told Finance Magnates.

“All this does is prolong the pain, and ensures we end up at the same point, but just 3-5 years later” than we would have without the pandemic-induced financial pressures,” he continued.

“The US elections are increasing the uncertainty and the need companies have to have more reserves and more liquidity,” Mashinsky said. “All of this is not good for GDP or for our employment numbers. No matter who wins we will have a severe recession in the next two to three years.”

Token Metrics’ Bill Noble also commented that “the crypto market may be agnostic to who wins the election because it knows the Fed will inject money into the financial system no matter who wins. If there is social disorder because of a Trump win, the Fed prints. If the election result is a blue wave and taxes rise, the Dollar falls because the Fed prints more, and more, and more.”

Similarly, Alex Mashinsky believes that financially speaking, the long-term economic trends that the US is currently on “a Biden victory will mean more taxes and more social programs,” which “will force many to seek alternative assets like gold and Bitcoin,” a factor that Mashinsky said should cause “more of an uptick than in a Trump win.”

“Bitcoin traders want to see the U.S. Dollar fall,” he said. “A decline in the Dollar would act as a propellant for bitcoin. A dollar decline after the election would likely cause bitcoin to skyrocket, and corporate players who delayed getting in might have to rush to buy bitcoin as it rises.”

Further, Graeme Moore pointed out that Biden’s actions in the past may have been good for Bitcoin in a rather roundabout way.

“Phil Zimmerman, the founder of Pretty Good Privacy (PGP), explicitly credits a Biden-sponsored anti-terrorism bill with motivating him to finish the code for PGP to allow anyone to have sufficient cryptographic techniques in messaging over the internet,” Moore said to Finance Magnates.

In other words, Moore said, “Biden sponsored a bill that scared Paul Zimmerman so much that he finally finished the code for PGP, eventually helping Bitcoin to be born.”

“On the other hand,” Alex Mashinsky continued, “Trump’s victory will mean more corporate safety net spending and more tax cuts which will push up asset prices and reduce the need for non-correlated assets like Bitcoin or Gold. For all who believe in modern monetary theory, then taking us from $27 trillion deficits to $35 trillion deficit in four years should not matter or cause a complete collapse of the US Dollar.”

Bill Noble commented that a Trump victory could strengthen the dollar, which could have an adverse effect on crypto prices: “altcoins are very sensitive to a rising dollar and rising interest rates, he said.

“The altcoin market is afraid of a Trump win because that could drive the U.S. Dollar higher. The continuation of low tax rates and a friendly Fed creates ‘American Exceptionalism’ when it comes to investing,” he said. “So, a Trump win would likely cause the Dollar to rise and crypto to temporarily fall because of the perception that more capital could flow to America.”

Additionally, Graeme Moore pointed out that beyond economic policy, Trump may have a bone to pick with crypto: “earlier this year, Trump supposedly told Steve Mnuchin to ‘go after Bitcoin”. Trump has also tweeted that Bitcoin is ‘not money’ and ‘based on thin air’.”

However, Moore said that while “Trump has publicly expressed distaste for Bitcoin,” there are others in the government who support BTC: “we have great people like Hester Peirce at the SEC who are very publicly positive on Bitcoin and related technologies,” he said.

“Peirce and others may be keeping Trump in check on doing anything detrimental to crypto as a whole.”

“Chaos and Uncertainty Are the Mother’s Milk of Cryptocurrency.”

At the same time, though, Monica Eaton-Cardone said that while the large amounts of debt that either candidate is likely to incur will likely damage the traditional economy (and perhaps boost BTC), traditional markets will suffer the most from a lack of clarity in election results.

“The market dislikes bad fiscal policies,” Eaton-Cardone said, but “more than anything else, it absolutely loathes ambiguity.

“If either Trump or Biden lands a knockout blow and wins the election by a landslide, the markets will respond favorably. At least we’ll have some degree of clarity. But if this election becomes a long, contentious legal battle and nobody knows who’s ultimately going to prevail, alternative forms of currency will seem much more enticing,” she said.

“Chaos and uncertainty are the mother’s milk of cryptocurrency.”