The longest-running TV series of all time has officially given a big nod to crypto in its latest episode. Episode 13 of Season 31 of The Simpsons which aired over the weekend, included a segment explaining cryptocurrency and blockchain.

The two-minute “tutorial” was voiced by none other than “TV’s most beloved scientist,” Jim Parsons, who plays Sheldon Cooper on The Big Bang Theory. The animated version of Parson briefly explained the basics of how decentralized, consensus-based cryptocurrencies function.

The segment also features an animated dancing book that sings soulfully about its function as a distributed ledger:

”I’m a consensus of shared and synchronized digital data,
Spread across multiple platforms from Shanghai to Granada.”

Interestingly, Bitcoin was not mentioned by Parsons, the dancing book, nor by any other character at any point in the episode. However, a briefly-displayed piece of text said that “we know who Satoshi is, but we’re not telling.”

Will the Simpsons’ predictive powers come through for crypto?

During its musical number, the singing distributed ledger also predicted that one day it would “be the cash of the future.” This is particularly interesting because of the uncanny “predictive” powers that the Simpsons has had in the past: earlier this year, Business Insider reported that the show had accurately predicted the future no less than 18 times, including the censorship of Michelangelo’s David and the Trump presidency.

This isn’t the only time that crypto and Bitcoin has made an appearance in mainstream media: in November, Stephen Colbert mentioned Bitcoin in an anti-Trump tirade during an episode of The Late Show.

TONIGHT: After being booed at sports arenas for the last few weeks, Trump finally found some cheers at a MAGA-KAG rally. #LSSC pic.twitter.com/fsHH9BuzAT 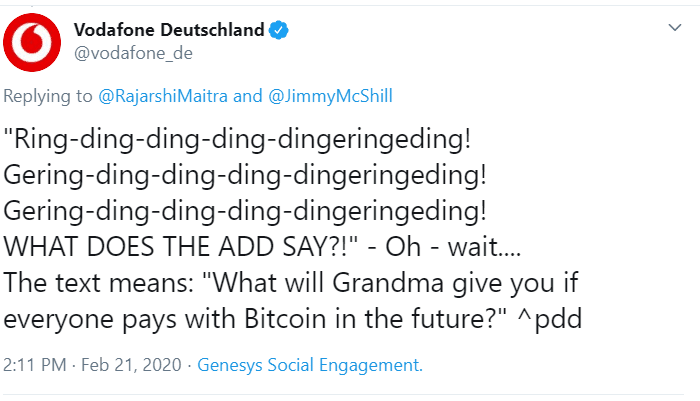 The Simpsons also mentioned Bitcoin all the way back in season 25.