The week began in a rather chaotic place: last Friday, news that the founders of crypto derivatives exchange, BitMEX had been indicted was nearly eclipsed by news that United States President Donald Trump had been diagnosed with COVID-19.

At the same time, the European Central Bank (ECB) published a statement saying that it was seriously considered the exploration of a digital euro by mid-2021.

The action did not stop there. On Tuesday, United States President Donald Trump, still recovering from the COVID-19 diagnosis, abruptly called off negotiations for a second COVID-related stimulus plan. The move sent United States stock markets into a temporary free-fall that was eventually corralled by an apparent attempt on the President’s part to backtrack the decision.

Trump says he's stopping stimulus talks until after the election.

Then, on Thursday, United States Attorney General, William Barr issued a set of guidelines for law enforcement in the cryptocurrency industry, a move that some analysts consider to be bullish for crypto over the long term.

However, for many crypto market analysts, the most remarkable event of the week was Bitcoin’s reaction to chaos in global markets, or rather its non-reaction. 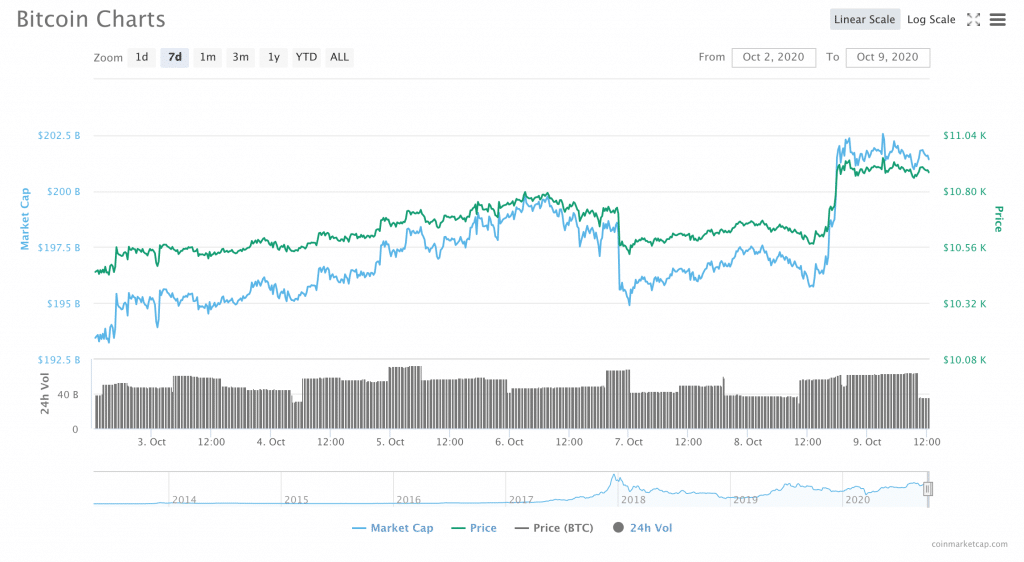 I don’t want to speak too soon… but #bitcoin shaking off @BitMEX CFTC charges, a sitting U.S. President getting #COVID-19, AND a ‘no additional stimulus’ announcement all in one week feels incredibly bullish…

In a statement shared with Finance Magnates, eToro market analyst Adam Vetesse explained that while the stimulus drama has already caused its fair share of chaos in global markets, the story is far from over.

“President Trump threw another U-turn at investors this week, after tweeting that he supports legislation to authorise sending a second batch of $1,200 stimulus checks to Americans,” Adam said.

Citing the Wall Street Journal, he added that “on Wednesday, Trump and his aides also shifted focus to calling for a series of standalone bills, including support for the airline industry. That reversed his position from Tuesday when he posted that he had instructed his representatives to halt negotiations on another round of stimulus until after the election.”

As the back-and-forth continues, financial markets continue to ‘rollercoaster’: “his to-ing and fro-ing on this major issue is causing ructions in markets,” Adam continued, adding that “yesterday, investors duly reacted to Trump’s latest position, with all three major US stock indices climbing by close to 2%.

“Stocks were also given a leg up after the Federal Reserve released minutes from its September meeting which stated it would keep rates low ‘for a longer period’ if the economic outlook remained subdued.”

For now, “markets look set to continue the momentum, with European markets opening positively and US futures pointing towards gains of around half a percent,” Adam said. “Travel is the best performing sector with British Airways parent IAG up 5%.”

What does this mean for Bitcoin?

While stock markets seemed to show fear at the prospect of a lack of stimulus, Bitcoin appeared to be rock steady. Though some analysts argue that another stimulus package (and the quantitative easing that would presumably come with it) could be a good thing for Bitcoin.

This is because of the consensus among a number of Bitcoin analysts that BTC, as an inherently scarce asset, will become increasingly valuable if and when QE-induced inflation ensues in the United States.

Bitcoin’s steady prices during the stock market drama of this week seem to suggest that BTC is in a period of non-correlation with stock markets.

However, this does not mean that further shocks to the global economy could not shake Bitcoin’s foundations in the future.

In an interview with Finance Magnates conducted earlier this week, JST Capital co-founder, Scott Freeman said that “since March, when COVID hit and markets sold off pretty aggressively, crypto, at that point, became pretty correlated with other assets. I think that until then, it operated in its own bubble.

“When the world de-risked and people started selling everything, you saw the same thing in crypto,” he said. “[…] People got scared. When there’s fear in the market, your first reaction is to go to cash, to go to something that’s 100 percent stable that you know you can’t lose.”

As Stimulus Drama Drags On, Regulatory Developments Push Forward in the US and Abroad

At the same time, regulatory developments in the United States and in Europe could be a bullish indicator for Bitcoin and other cryptocurrencies in the long term. After all, it has long been the consensus that clearer regulations invite the presence of large institutional investors in the crypto space.

“Cryptocurrency is a technology that could fundamentally transform how human beings interact, and how we organize society,” Barr said in an official statement from the Department of Justice. “Ensuring that use of this technology is safe, and does not imperil our public safety or our national security, is vitally important to America and its allies.”

The same statement explained that “the Framework provides a comprehensive overview of the emerging threats and enforcement challenges associated with the increasing prevalence and use of cryptocurrency.”

BitMEX charge and Trump contracting COVID-19 couldn't take Bitcoin far below the $10k level even briefly. The resilience of Bitcoin during this cycle is quite impressive.

The guidelines also “detail the important relationships that the Department of Justice has built with regulatory and enforcement partners both within the United States government and around the world; and outlines the Department’s response strategies.”

The guidelines appear to be a response to last week’s indictment of the four co-founders of the BitMEX exchange, an event that seemed to have a surprisingly small effect on cryptocurrency markets.

In fact, “the BitMEX news is good for Bitcoin’s adoption also bullish for medium-term and long-term price.”

I was thinking the same thing. ~3% correction for a major exchange going down? In the "old" days… add a zero!

Europe’s CBDC Plans Lead the Way into a Digital Future

Across the pond, the European Central Bank (ECB) published a report stating that it could begin serious study and exploration of a ‘digital euro’ by the middle of 2021.

According to the document, a “High-Level Task Force on CBDC will coordinate this experimentation so that the resources of the Eurosystem are leveraged efficiently.

“To ensure that meaningful answers are obtained to the open questions raised in this report, towards mid-2021 the Eurosystem will decide whether to launch a digital euro project, which would start with an investigation phase.”

Speaking of new tools, it looks like CBDC is also coming soon, starting with the ECB. Think about it: ECB, not the Fed or BoJ, is now the big innovator in central banking space. ECB has introduced world to (1) dual interest rates and soon (2) CBDC. https://t.co/nZbUqdSDbs

While most analysts agree that CBDCs are an inevitability in Europe and elsewhere in the world, the process of developing and issuing a CBDC seems to raise more questions than answers.

“CBDCs Are a Double-Edged Sword.”

“CBDCs are a double-edged sword; on one hand, they can speed up transaction processing, making them more efficient and less costly to banks and governments,” said Juan Aja Aguinaco, co-founder of Shyft Network, to Finance Magnates.

“However, they also represent considerable security challenges to both central banks and users and may have deep privacy implications that will leave users vulnerable to government-led financial surveillance,” Aguinaco said.

Additionally, “moving to CBDC is not as easy as it sounds,” said Tal Eyashiv, founder & chief executive of SPiCE VC, to Finance Magnates.

“There are many operational and control issues to be answered before a CBDC can be a reality in a country,” he said. “Will the role central banks be related to the provision of liquidity and intermediation services change? How will it impact the role of banks?”

“Also, creating the means for all members of society to eventually use a CBDC rather than paper money may take much thought and implementation.”