Recently, a website claiming to be the host of the ICO for the Telegram messaging app appeared on the internet.  The site–which is well-designed, and filled with most of the right accoutrements–allows participants to deposit BTC and ETH in exchange for so-called ‘GRAM’ tokens.

However, something is most certainly amiss. While the website appears to be legitimate, there is absolutely no mention of any kind of blockchain project anywhere on the Telegram website. Additionally, Twitter has been alight with hundreds of tweets condemning Gramtoken.io and questioning the legitimacy of the ICO.

Although many of the tweets have been directed at Pavel Durov, neither he nor anyone else from Telegram has made a statement acknowledging anything related to Gramtoken.io.

However, on December 22, 2017, Durov did tweet that ‘several scam websites’ had been detected.

In Some Ways, the ICO Appears to Be Legitimate–But Red Flags Remain

On January 8, TechCrunch published a report on the upcoming Telegram ICO for its new blockchain platform, TON.  According to TechCrunch–and to the whitepaper displayed on the website allegedly belonging to the Telegram ICO, gramtoken.io–the Telegram Open Network (TON) will be “a new, ‘third generation’ blockchain with superior capabilities, after Bitcoin and, later, Ethereum paved the way.”

TON will reportedly act as a network for messages and decentralized payments, and will be powered by GRAM tokens, which are up for sale on Gramtoken.io. The website’s front end is gorgeous; the whitepaper includes such dazzling terms as “Infinite Sharing Paradigm” and “2-D Distributed ledgers;” there’s even a technical whitepaper that has allegedly been authored by Dr. Nikolai Durov, brother of Telegram CEO and founder Pavel Durov.

In addition to the lack of any acknowledgment from the real Telegraph website, Gramtoken.io lacks any information on how to get in contact with anyone involved in the project.

Does the Scam Have Roots in Russia?

Forbes contributor Kenneth Rapoza first heard about the alleged Telegram ICO weeks before the TechCrunch report. “Someone from a Russian blockchain infrastructure company” who sent him a link to “some random website [he’d] never heard of in Russian”.  Rapoza went onto say that someone “plugged into the Russian crypto scene” confirmed the rumours.

Not sure why some media would refer to @telegram as “Russia-based”. We have no servers, developers, companies, bank accounts or offices in that country.

A Scam of a Scam?

As if things couldn’t get any stranger, several other (more obvious) scam sites claiming to be the host of the Telegram ICO have appeared in what seems to be a rash of Telegram-related ICO scams.

Tgram.cc (which Pavel Durov identified as a scam on Twitter) says that the crypto community has made the switch to Telegram “like right now.” 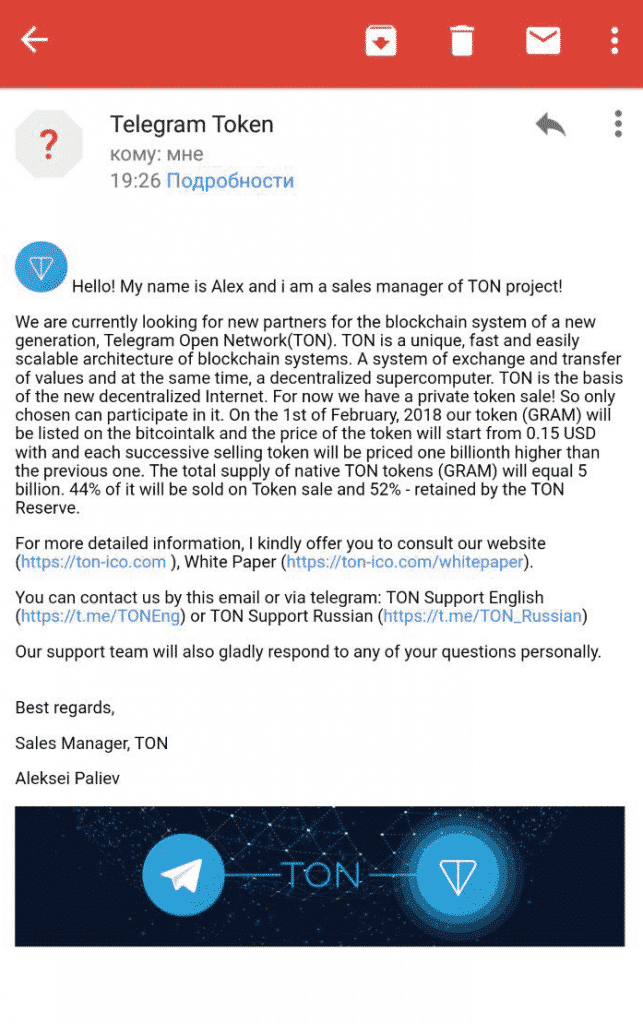 Even if Gramtoken.io does turn out to be legitimate, Telegram’s failure to appropriately address the outcry associated with Gramtoken.io is somewhat negligent, despite any objective wrongdoing on their own part.