XRP has claimed that even if it were a security, the investors that are in the process of suing Ripple for an alleged unregistered securities sale brought their case too late, according to a new filing from the company. The filing is reportedly the company’s last effort to get the court to drop an amended class-action lawsuit that was filed in August before the scheduled hearing on January 15th, 2020.

The filing says that specifically, “plaintiff’s federal securities claims are barred by Section 13’s statute of repose, which strictly forbids claims brought more than three years after the security was bona fide offered to the public.” (15 U.S.C. § 77m.)

The filing marks the latest move in the ongoing court battle, which began when Bradley Sostack, who has been appointed as the lead plaintiff in the ongoing case, filed his amended return in August.

Ripple’s latest filing is largely a reiteration of arguments that the company made previously to dismiss the case. Besides the alleged passing of the statute of repose on the case, Ripple also makes the argument that the plaintiff has not been able to show that he purchased XRP from any of the defendants (Ripple Labs Inc., XRP II, LLC, and Bradley Garlinghouse) or from an initial coin offering (ICO).

#Ripple Files Last Bid To Dismiss #XRP Securities Lawsuit Before Court Meeting@Ripple said in a new filing “#XRP is not a security but that’s irrelevant for this motion because the investors suing #Ripple brought their case far too late for it to proceedhttps://t.co/uOc5EnCjC9

Rebecca Rettig, a partner at FisherBroyles, told CoinDesk that several years ago, the statute of repose argument as successfully used by defendants in a number of mortgage-backed securities cases.

”Even if XRP were a security”…

The filing also represents Ripple’s latest effort to reiterate that XRP–which is currently the third-largest cryptocurrency by market cap– should not be legally classified as a security.

“Plaintiff contends that XRP is a security under the Howey test…XRP is not a security…but that is irrelevant for this motion. Even if XRP were, Plaintiff’s claim still fail as a matter of law,” the filing said, with extra emphasis on the word “were.”

The filing also took aim at the Plaintiff’s alleged claims that the XRP he purchased in 2018 were somehow different from the XRP tokens that went on the market in 2013.

“In a last-gasp argument, Plaintiff seeks to avoid the statute of repose by claiming that the XRP he purchased in 2018 was a different alleged security from that ‘first offered’ in 2013,” the filing reads.

“Plaintiff argues that Defendants’ actions—taken years after he alleges all ‘fungible’ XRP was created in 2013— somehow produced ‘new XRP’ (identical in every way to the “old” XRP), which Defendants then supposedly offered to the public anew in ‘subsequent,’ ‘indiscriminate’ offerings.” 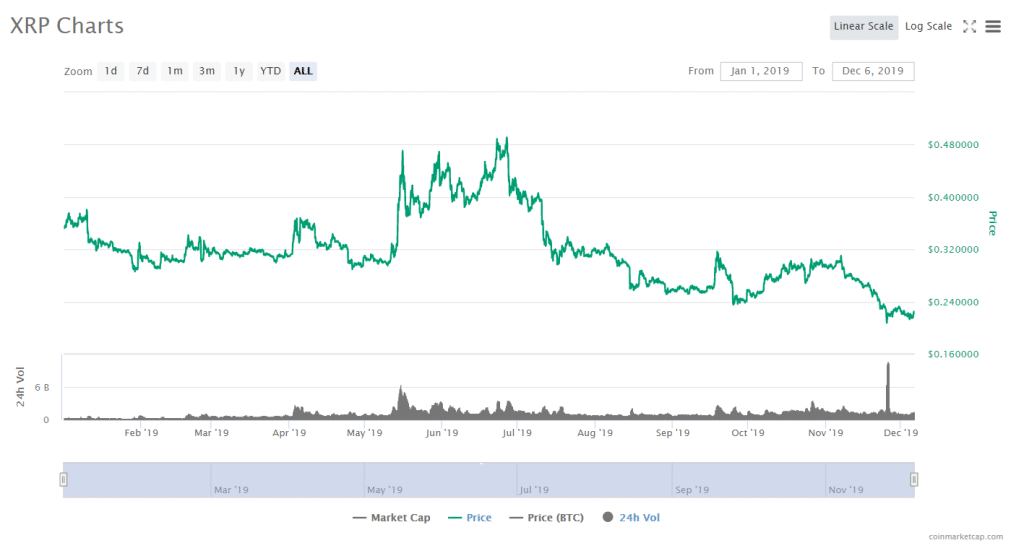 While it’s unclear how the lawsuit will turn out, the ongoing legal battle isn’t the only bit of difficult news that Ripple has had to field recently. According to data from CoinMarketCap, the price of XRP has fallen roughly 37% since the beginning of the year.

Ripple Reply to Response by CoinDesk on Scribd