The decentralized finance (DeFi) ecosystem, as a whole, is experiencing a period of rapid growth and much media attention.

Therefore, much of the conversation around the DeFi space seems to be focused on hype versus value. As token valuations continue to increase, it is unclear whether their upward movements are fueled by speculation or by usage.

Recently, Finance Magnates spoke to Deniz Omer, head of ecosystem growth at Kyber Network, about the relationship between hype and speculation in cryptocurrency markets. Kyber was created during the ICO bubble of 2017, and has managed to prove its fundamental worth in the years since.

We asked Deniz about Kyber’s past, present, and future, as well as his thoughts on the growth of the decentralized finance (DeFi) space in general.

Before joining Kyber, Deniz spent eleven years working as a private company content specialist and data market analyst at Thomson Reuters. He is also the co-founder and chief executive of ICO Due Dilligence and a hedge fund manager at Cryptodyssey Capital. Additionally, he holds a master’s degree in digital currency from the University of Nicosia.

This is an excerpt. To hear the full interview, visit us on Soundcloud or Youtube.

”When we started back in 2018, we were purely thinking of a simple smart contract.”

Essentially, Kyber is a protocol that enables automated, decentralized, instant, and low-fee exchanges of Ethereum-based assets.

The fact that Kyber was conceptualized during the ICO boom of 2017 and has managed to stay around until today is somewhat unique in the cryptocurrency space. A great deal of the cryptocurrency and blockchain projects that held ICOs in 2017 have disappeared completely. Many of the most successful projects today were started after the boom had ended.

Now, with a Twitter following of 117,400 users and a token market cap of $283,580,338, Kyber seems to be well on its way toward proving its fundamental worth as a lasting member of the cryptocurrency ecosystem. 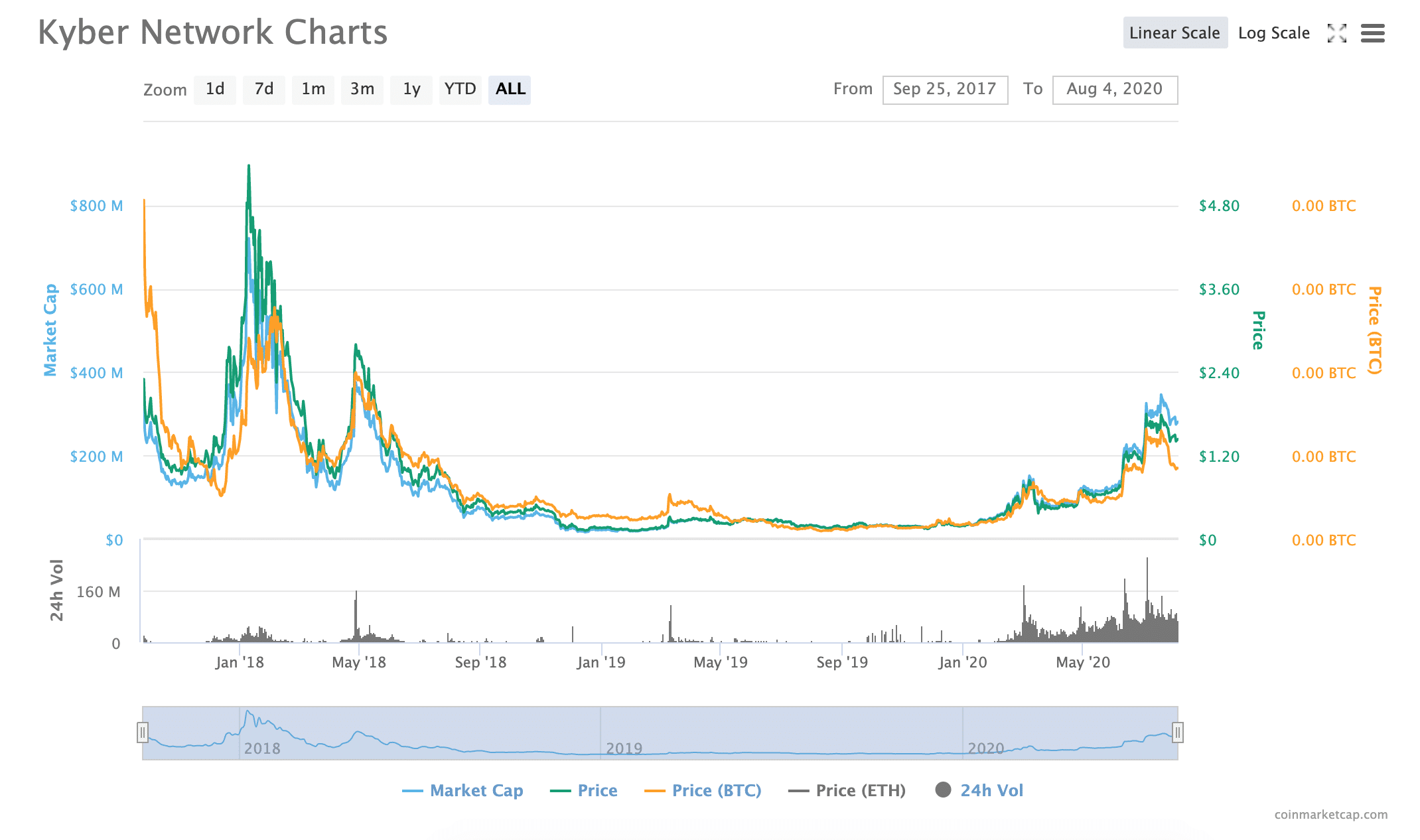 We asked Deniz about the process of building fundamental value in a culture of widespread hype and speculation. “We always thought we’d grow in phases – build one concept and then build another on top of that.

“So, when we started back in 2018, we were purely thinking of a simple smart contract that can swap one token for another – and we wanted to make sure that piece was working correctly [before we moved forward]; to make sure that no one was losing money, and there were no bugs or anything.”

Slow and Steady Wins the race: The Process of Sustainable Growth

After this initial smart contract phase had ‘proved itself’, Deniz said that Kyber began exploring phase two: finding “what kinds of dapps could actually integrate” the network, and “start growing the ecosystem” that way.

“That’s when we started getting wallets on board, we started getting DeFi dapps on board,” he continued. “So our next phase of growth wasn’t purely people swapping one token to another, but as each individual DeFi dapp grew, our volume grew with it (because they use Kyber for their trades.)”

In other words: “We started growing through dapps integrated into Kyber.”

Kyber’s third and most recent phase of development centers around its Katalyst upgrade, which was “a huge upgrade on the smart contracts, plus it also introduces a KyberDAO, where you can see holders are incentivized to actually set the parameters of Kyber network.”

“We’re seeing a huge explosion in DeFi in general.”

So, what’s next for the network?

Deniz said that he believes the growth of Kyber network will happen in parallel to some of the trends in the greater cryptocurrency and blockchain spheres: “We’re seeing a huge explosion in DeFi in general and in Ethereum,” he said, adding that he is particularly excited about the “completely new concepts” that have been created, including things like yield farming and yield mining.

Efficiency is on the Blockchain HorizonGo to article >>

Deniz explained that he believes the explosion of growth that currently seems to be taking place in DeFi at the moment is due to the fact that the infrastructure of the DeFi ecosystem is stronger and more prevalent than ever before.

“Two years ago, you couldn’t have built most of these products, because the infrastructure wasn’t there: you didn’t have all these liquidity providers you could use for your DeFi dapps,” he said. “So, first of all, we went and built that layer: four or five different projects–Kyber, Bancor, 0x – they all started bringing liquidity to Ethereum.

“Once we saw that was viable, that’s when the other DeFi products said, ‘oh, I can combine this and that, and use the composability aspect of Ethereum to start building even newer things.’

“There has to be very strong liquidity in the market for any of this to function,” he continued. “Now we have very strong lego bricks to bring that liquidity…that’s why you can start to build this second layer of decentralized financial applications on top of that.

“As you have an explosion in the type of dapps, that expands the scope of Ethereum as well,” he went on. “It’s one thing to have a world where there’s only DEXs, but it’s another to have DEXs, and margin trading, and insurance products, and prediction markets, and yield farming and mining–it sucks in more people as it grows.”

Are DeFi Assets Overvalued at the Moment?

We also asked Deniz if he believes that the recent surge of growth in the DeFi ecosystem may have caused a bit of overvaluation in some DeFi-related assets. After all, a number of analysts in the cryptocurrency space have drawn a parallel between the DeFi-related hype and the 2017 ICO bubble.

He said that indeed, there is a parallel to be drawn: “In 2017, if you look at the actual value that existed, I would say that 98 percent of that was speculative value, and only two percent was fundamental value.

“Over 2018 and 2019, as the market deflated,” the ratio began to reverse course: “fundamental value went higher and higher, and speculative value kind of dropped.”

“So now, what I’m seeing is that the ratio of speculative value is increasing compared to the fundamental value” in the DeFi ecosystem, Deniz said.

However, “it’s not that these products are not amazing – they are super amazing … but when I see a several-thousand-dollar valuation for some kind of governance token, I’m not sure the capture mechanism allows for so much value to go up.”

In other words, “I think it’s short-term, basically,” Deniz continued. “… There should be a rebalancing and a correction at some point, especially if more people join in.”

Therefore, the valuations of some of these governance tokens do not seem to be driven by platform user ownership: “it’s still very, very small,” he said. “I don’t think it justifies billion-dollar valuations of any of these kinds of platforms as it is.”

Dear DeFi projects, stop parading your TVL and yield numbers and tell us how your number of new and total users (use unique addresses as a proxy) are doing.

If you have 1bn+ locked up but only a few dozen users this is neither impressive nor worthy of current mcaps.

What needs to happen in order for these DeFi platforms to start getting more users?

Part of the quest to onboard more users is simply a waiting game: “I think it’ll happen organically over time,” Deniz said. “On top of that, you’ll have the speculative layer going up and down kind of ‘pumping and dumping,’ but at the end of the day, these teams are still working their asses off.

“Every time I go to a hackathon, I see the kind of innovation that happens, and that doesn’t stop,” Deniz continued. “The result of that is that over time, the DeFi and Ethereum ‘pie’ keeps getting bigger and bigger, and sucking in more and more people.”

This is an excerpt. To hear the full interview, visit us on Soundcloud or Youtube.