The QuadrigaCX scandal that has been grabbing headlines over the past several weeks has only gotten more and more complicated.

Now, affected users are facing the harsh reality that they may never see a penny of their lost funds again. The disaster is so large in scale and contains so many unexpected elements that many have compared it to the hack of cryptocurrency exchange Mt Gox. For years, the hack was the largest in history, and it has since been mythologized as a catalyst for the formation of regulations and better exchange security practices around the world.

QuadrigaCX wasn’t hacked (as far as we know), but its users have been left just as helpless as those affected by Mt Gox. What will the QuadrigaCX scandal mean for the industry?

Here’s What We Know For Sure

Before we dive into what the future will look like, it’s important to understand the past details of QuadrigaCX. There are so many bizarre details and loose ends involved in the QuadrigaCX case that it’s difficult to tell what’s fact and what’s fiction – but here’s what is known to be true.

QuadrigaCX originally began experiencing trouble in early 2018 when the Canadian Imperial Bank of Commerce (CIBC) froze some of the accounts that the exchange’s payment processors had opened to store the exchange’s funds in. The legal battle between Quadriga, the payment processors, and CIBC caused some customers to have no access to their funds for weeks, or even months. On December 26, the exchange announced that funds had been restored and would be distributed over the coming weeks.

Then, on January 14, 2019, Jennifer Robertson revealed that her husband, QuadrigaCX CEO Gerald Cotten, had passed away in India on December 9. Robertson later claimed that Cotten was the only person who knew the location of the private keys (passwords) to offline wallets in which approximately $150 million worth of cryptocurrency was stored. 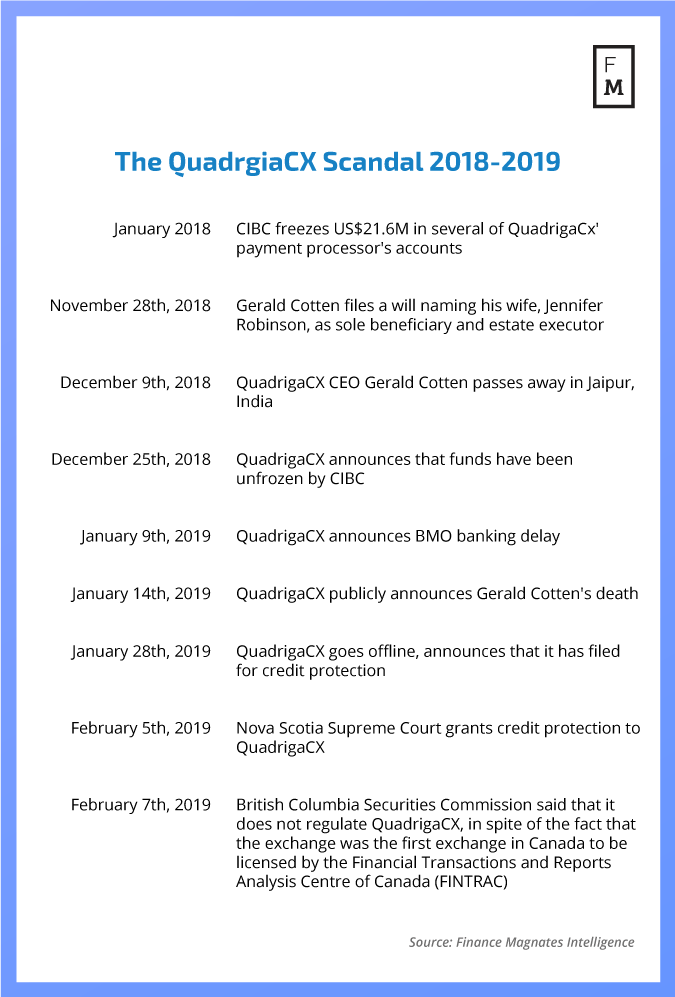 Details later emerged that 12 days before Cotten’s death was made official, he had filed a will naming her as the full and sole beneficiary of his estate, as well as estate executor.

The keys are expected to be stored on an encrypted laptop that belonged to Cotten when he was alive. A security expert is attempting to decrypt the laptop and find the private keys, but has been unsuccessful so far. Eventually, the laptop will be handed over to Ernst and Young, a professional services firm that has been court appointed as a third-party monitor for QuadrigaCX’s funds and activities.

At the moment, QuadrigaCX has acknowledged that it owes 115,000 of its users a total of CAD$190,000 (roughly USD$150,000.) CAD$70 million is allegedly held by the exchange’s payment processors, while the remaining CAD$120 million is held in crypto. There are a total of approximately 300,000 users registered on the exchange, but the remaining 185,000 (luckily) did not have any of their funds stored on QuadrigaCX’s platform.

QuadrigaCX was granted a 30-day stay of proceedings by the Nova Scotia Supreme Court on February 5 to place a hold on legal threats against the exchange while it attempts to regain its bearings. The exchange announced that it had filed for credit protection with the Nova Scotia Supreme Court on January 28, the same day that it suddenly went offline.

On February 7, Reuters reported that the British Columbia Securities Commission “said it has been aware of the company’s operations since 2017 but has not had any indication that it was trading in securities or derivatives or if it operated as an exchange, which would put it under its purview.” As such, affected users’ rights to legal recourse are not likely to benefit from BCSC’s help.

Now, here’s what we don’t know.

Did QuadrigaCX Ever Have the Funds It Claims it Has?

The confusion and stranger-than-fiction nature of what is allegedly happening to the exchange and its users have naturally led to skepticism and even some conspiracy theories. Jesse Powell, founder of US-based cryptocurrency exchange Kraken, is among those who find the story to be hard to believe:

We have thousands of wallet addresses known to belong to @QuadrigaCoinEx and are investigating the bizarre and, frankly, unbelievable story of the founder’s death and lost keys. I’m not normally calling for subpoenas but if @rcmpgrcpolice are looking in to this, contact @krakenfx

Indeed, many suspect that the bizarre story of the death and the missing private keys was concocted to hide the fact that the exchange may not have ever had the assets that it claims are in its possession.

Taylor Monahan, founder and CEO of IT service management company MyCrypto, explained to CoinDesk that based on her findings, it’s unlikely that QuadrigaCX ever had the funds.

“I would be very surprised to learn of a cold storage ether address” based on how the exchange managed its holdings with three primary wallets,” she said. “Almost all of the largest transactions are either sent to exchanges or amongst three ‘primary’ addresses … I haven’t seen anything indicating a large reserve or cold storage mechanism being used on the Ethereum chain.”

There is some evidence that the exchange does (or did) have some of the money it claims to have had. Wallets associated with Quadriga were active just days before Cotten is said to have passed away. The exchange’s alleged hot wallet (0xB6AaC3b56FF818496B747EA57fCBe42A9aae6218) sent 4,550 ETH between December 2-7 to another wallet that interacted with several other addresses associated with QuadrigaCX.

Monahan postulated that these transactions might have been made to provide quick access to cash. “Whether that is server bills or contractors, at some point you need cash,” she explained. “If you have a strained relationship with your banking partners, you may choose to obtain fiat via another mechanism. So it wouldn’t surprise me if an exchange used a [over-the-counter] desk or another exchange in the space in order to move ETH or BTC into fiat and ultimately pay bills.”

Is This All a Conspiracy?

Of course, the lack of information and general suspicion around the exchange’s cold wallets has given rise to some wild conspiracy theories. Essentially, all of them follow the same narrative: Cotten, finding himself in a desperate situation, faked his own death in India and disappeared, leaving the exchange’s loose ends to the wind.

“While it’s certainly suspicious that an exchange would allow one man to hold $190 million, we can’t be certain that this was not the case,” Thieriot explained. “With all due sensitivity to the situation, an exchange’s cold storage being vulnerable in this way is bound to invite speculation of malfeasance. A fact pattern including $22m in frozen funds by the CIBC is also not encouraging.”

Matt Branton, co-founder of blockchain-based financial instrument Neutral, echoed Thieriot’s sentiments. “A single person managing one key with that amount of capital in it is at the very least extremely negligent,” he said to Finance Magnates.

Will Users Ever Get Their Money Back?

Thieriot also said that the situation is unlikely to come to a happy ending. “Although we can’t say for sure whether users will be able to get their money back, it’s not promising to have to rely on somehow gaining access to the account by means other than using a private key.”

Thieriot said that it’s unlikely that anything can be done to recover the keys at this stage–the best solution would have been if Cotten had taken preemptive action to prevent a situation like this before his death. “This brings to light the issue of private keys in general, and it’s one of the major reasons we added inheritability to our platform – to allow relatives to access private keys in circumstances like these.”

The bottom line is that the cryptocurrency industry is still plagued with large-scale hacking and insolvency cases like QuadrigaCX, although most of the stories are far less interesting. “Unfortunately, schemes like this are not new to the space and continue to tarnish the reputation of exchanges and discourage new investors. If we want to make the leap to the mass market, we have to take steps to prevent issues like these from becoming commonplace.”

In the meantime, Branton said that authorities need to be paying close attention to any wallet associated with Quadriga’s holdings. “Follow the money. Given how Bitcoin works it is possible to track every single deposit into QuadrigaCX and determine which cold wallet these funds were moved into.”

“ Any investigator looking into the legitimacy of these claims needs to watch the cold wallet addresses for any movement, if the money ever moves it points to some criminality.”

What Does This Mean For the Industry?

In every sense of the phrase, the QuadrigaCX disaster is an absolute worst-case scenario.

Stories of individuals permanently losing access to their Bitcoin wallets are not uncommon in the industry at all–in fact, experts have written the losses off as a necessary price to pay in order to truly escape from the “tyranny” of centralized banks. Satoshi Nakamoto him- or herself once said that “lost coins only make everyone else’s coins worth slightly more. Think of it as a donation to everyone.”

It seems that the same people that wrote off the individual losses are awfully silent now that a lack of banking and the regulation that comes with it has left so many without their money. But assuming that the funds are indeed in the cold wallets, the incident has shone a spotlight on at least one area of the industry that needs serious improvement.

Takara Small, host of the Globe and Mail tech podcast I’ll Go First told CBC Radio that “when situations like this happen, it forces an industry or space to … grow and change, and this will hopefully, ideally do that.”

Kyle Asman, partner at BX3 Capital, said that the most significant problem that QuadrigaCX has brought into the spotlight is crypto storage. “Nobody has solved is storing cryptocurrency,” he said. “If it’s in a hot wallet, it’s vulnerable to being sent away. If it’s in cold storage and the device is lost, it’s gone forever. In order to be a mainstream method of investing or transacting, the custody issue needs to be solved.”

“Questions like this affect not only cryptocurrencies, but represent a potential flaw in the narrative of tokenized securities or real assets on a blockchain,” Moore said. “If you tokenize shares in Apple, and a 5 percent shareholder loses his private keys, did 5 percent of Apple stock just get permanently locked from trading? Who gets the dividend?”

How Can People Protect Themselves From a Similar Fate?

Of course, there are steps that individual users can take to protect themselves from losing funds in the event of an exchange collapse.

For one thing, individual and institutional investors can purchase cryptocurrency insurance from a growing number of companies. “Insurance for cryptocurrency storage will be a big opportunity,” said Christian Weishuber, a spokesman for insurance company Allianz, in a report by Insurance Journal. Allianz started offering crypto insurance last year. “Digital assets are becoming more relevant, important and prevalent on the real economy and we are exploring product and coverage options in this area.”

Really, though, it comes down to one of the most common and basic pieces of advice for newcomers in the cryptocurrency space: don’t store your coins on an exchange.

It’s one thing to trade your cryptocurrency on an unregulated exchange,” said Patrick Burke, who until recently ran New York State Department of Financial Services’ BitLicense program, in an email to Finance Magnates. “It’s another to trust them to store your coins safely for you. If you are not day-trading, you do not need to store your crypto on an exchange. The safest place is with companies that specialize in providing ultra-safe custody for digital assets.”