If you’re news-savvy, into cryptocurrency, or just Canadian, chances are that the word “QuadrigaCX” has come across your radar sometime within the last week.

The Vancouver-based exchange has grabbed headlines across the world for what has become a rather messy and wild tale. The story has it all–death, money, possible deception, and lots of conspiracy theories.

Now, as much as $190 million is at large, and at least 90,000 frustrated users have been unable to withdraw their funds from the exchange for weeks–some of them for months.

The exchange’s troubles reached a boiling point last week when the exchange went completely offline. The entire QuadrigaCX website was replaced with an announcement that the exchange had filed for “credit protection” (in other words, bankruptcy) with the Nova Scotia Supreme Court.

Welp, I was just on the site and got booted to this. So either something good is coming or… that’s all folks ? #quadrigacx #crypto $canada pic.twitter.com/soVJaJUXLu

The request was granted on February 5. Justice Michael Wood also granted QuadringaCX a 30-day stay of proceedings to temporarily shield the exchange from the wave of lawsuits that will inevitably come its way. Additionally, multinational professional services firm Ernst & Young (EY) was appointed as a third-party monitor for QuadrigaCX as part of the ruling.

How did things get to this point? Let’s start at the beginning.

Prior to the freeze, the payment processors were an integral part of the exchange’s operations. Customers of the exchange were required to “send money to the company through one of several channels, such as a bank draft, wire or Interac e-transfer. Some of those deposits landed in Costodian’s accounts at CIBC,” the Globe and Mail reported. “Once the money [was] received, Quadriga credits the depositor’s account with Quadriga Bucks, units that can be used to buy cryptocurrencies.”

388 customers were affected by the freeze; the funds in the affected accounts amounted to the equivalent of US$21.6 million. At the time, CIBC claimed that the freeze was the result of confusion over who owned the money in the accounts.

The funds were finally released in December of 2018. “Payments will resume when the banks fully reopen on December 27th,” said a tweet from the company on December 25th.

We can now announce that the money has been received by Billerfy and payments will resume when the banks fully reopen on December 27th.

Merry Christmas to you all!

However, several weeks after the funds were unfrozen, little progress had been made on returning them to users.”Yesterday, our team waited for confirmation that all the queued payments have been processed but there is yet another delay,” QuadrigaCX announced in a January 9th statement on Reddit. “Mid-afternoon, BMO, the bank where the drafts were deposited, told us that the money was being held a bit longer for its compliance department to give the go-ahead.”

On Tuesday, January 15th, QuadrigaCX’ interim president and CEO Aaron Matthews emailed users saying that the exchange’s team was “actively working on having the funds deposited and distributed.”

“While we don’t have a specific update pertaining to this situation, our goal was to resolve this issue within the next two weeks and we remain committed to that goal,”

However, as the payments saga continued to unfold, QuadringaCX became embroiled in a much more serious (and much more unusual) controversy.

On January 14th, QuadrigaCX announced that its 30-year-old CEO, Gerald Cotten, had passed away on December 9th. “Please see our statement regarding the sudden passing of our @QuadrigaCoinEx founder and CEO, Gerry Cotten,” the exchange tweeted.

The statement, which has since been removed from the exchange’s website, claimed that Cotten died from complications related to Crohn’s disease in Jaipur, India, where he was allegedly working on building an orphanage.

Please see our statement regarding the sudden passing of our @QuadrigaCoinEx founder and CEO, Gerry Cotten. A visionary leader who transformed the lives of those around him, he will be greatly
missed. https://t.co/5rvGZ2BfLV

Cotten’s passing was later confirmed by a death certificate issued by the Government of Rajasthan dated December 9 and a statement of death by J.A. Snow Funeral Home in Halifax dated December 12. Prior to the releases of the certificate and statement, a spokesperson for Global Affairs Canada (the Canadian government organization that manages diplomatic relations), confirmed that a Canadian had recently died in India, but did not name Cotten specifically.

“Gerry’s death was a shock to all of us and we are deeply saddened by his passing,” the statement says. “One of Gerry’s many accomplishments was his ability to build a highly capable and successful management team, which will continue his legacy.” The statement also named Aaron Matthews, the exchange’s former Head of Operations, as interim President and CEO.

However, Matthews and the remaining staff have had their hands tied when it comes to running any of the exchange’s operations. The reason? A large portion of the exchange’s cryptocurrency reserves is locked inside of “cold wallets”–unhackable offline storage units–that are only accessible by Cotten himself. 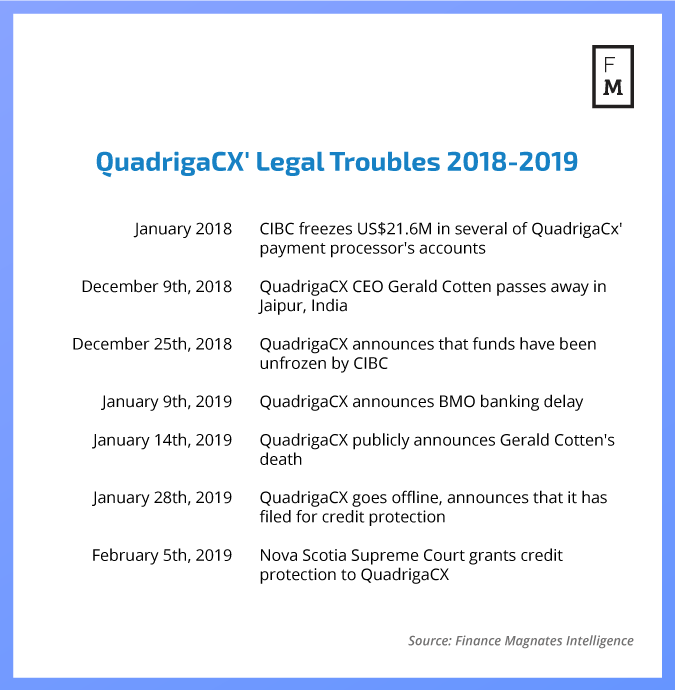 “With a cold storage wallet, it’s completely offline. It’s not connected to the servers or the infrastructure set up by the exchange,” QuadrigaCX customer Elvis Cavalic told CBC’s As It Happens. “It’s usually a physical device that you would plug into a computer and requires a button to be pressed and it might need a password.”

Jennifer Robertson explained in an affidavit that “the laptop computer from which Gerry carried out the company’s business is encrypted and I do not know the password or recovery key. Despite repeated and diligent searches, I have not been able to find them written down anywhere.”

I’m at the Quadriga hearing. The widow of Gerry Cotten is not here due to “safety issues”. But she’s available if need be for cross examination on her affidavit.

Jennifer Robertson Affidavit by on Scribd

The message currently posted on QuadrigaCX’ website also claims that despite efforts to regain access to the exchange’s offline liquidity pools, the future looks grim: “For the past weeks, we have worked extensively to address our liquidity issues, which include attempting to locate and secure our very significant cryptocurrency reserves held in cold wallets, and that are required to satisfy customer cryptocurrency balances on deposit.”

“Unfortunately, these efforts have not been successful,” the announcement read.

Jennifer Robertson has allegedly already hired one security expert who is attempting to glean any relevant information from the laptop where Cotten is said to have kept the keys to QuadrigaCX’ reserves. The CBC reported that the laptop will be handed over to lawyers who represent creditors, and will “eventually [be] given to a court-appointed monitor.”

Lawyers for creditors like the idea of the laptop which purportedly holds the cold wallets with as much as $180-million in crypto will be secured by a court-appointed lawyer.

However, if efforts to regain access to the funds are unsuccessful, there’s a good chance that affected users could never see a penny of the money they’ve lost. The losses aren’t insignificant, either; some users have more than $1 million in assets locked inside the exchange.

The Air is Rife With Conspiracy Theories

The frustration and confusion surrounding Cotten’s passing and the exchange’s insolvency have given way to an angry backlash against Robertson and the exchange, as well as a flurry of conspiracy theories.

One such theory proposes that Cotten’s death was faked as a way to hide the fact that the exchange is insolvent.

No one would write a death certificate noting “crohn’s dz” as a cause of death, it would require downright negligence to even be tangentially causative. Signed will 2 weeks before “death”, yet the 190mm private keys omitted? This has exit scam written all over it. #QuadrigaCX

The theory is difficult to disprove because such a significant portion of the exchange’s assets are allegedly stored in cryptocurrency. A number of blockchain analysts who have taken a special interest in the case have released inconclusive statements about whether or not the exchange can be proven as solvent.

Taylor Monahan, Founder and CEO of open-source blockchain interface MyCrypto, tweeted that according to her findings, the exchange does not possess enough Ethereum to be liquid.

Other factors fueling the theory include the fact that the exchange waited nearly a month to publicly disclose its former CEO’s death, and that the death coincided with the alleged end of the exchange’s CIBC troubles.

What’s even more suspicious is that Cotten is said to have legally altered his will 12 days before his death.

There has been widespread suspicion online that there is some sort of nefarious activity involved in Gerry Cotten’s death in India and the apparent loss of $US 190-million in crypto currency locked in his encrypted laptop.

“The exchange founder’s will outlines numerous assets he held, including several properties in Nova Scotia and in Kelowna, British Columbia, a 2017 Lexus, an airplane, a Jeanneau 51 yacht and his pet chihuahuas, Nitro and Gully,” Bloomberg reported. “He also left his frequent flier points and reward points to Robertson. He held accounts with Bank of Montreal and Canadian Tire.”


Rumours have also spread that the exchange’s co-founder Michael Patryn may in fact be Omar Dhahani, an individual with a criminal record rife with scams and fraud. Previously, Dahani used the moniker ‘Omar Patryn’ in a forfeiture case. ‘Omar Patryn’ was also one of the names Dahani used to start a fraudulent company called the Midas Gold Exchange.

So I saw a claim that Omar Dhahani is really Michael Patryn of the Quandringa Exchange.

Omar Dhanani has a pretty easy to find criminal history.

He also used the name Omar Patryn as an aka in a 2005 forfeiture case.

Of course, these theories are nothing more than conjecture at this point in time. The tale is complicated, and its conclusion still seems to be far away in the future.

Until then, we can hope that the truth–whatever it is–will become clear.

This is a developing story. Finance Magnates will continue to progressively report on any developments. In the meantime, please comment with your thoughts and insights below–we’d love to hear from you.

Gerald Cotten’s surname is spelt as “Cottan” on his death certificate as issued by the Government of Rajasthan. Hmm….

Is it true that death certificate is issued by the Government of Rajasthan, because it is a state in India, and do you think he died there?

Yes; it is true that the death certificate was indeed issued by the “Government of Rajasthan”, and overall death is still mysterious because no one knows what he was doing in India at that time and what happened in the end.