In fact, Bitcoin even dipped below the $10,000 mark on several occasions this week, reaching back into price territory that has not been seen since late July.

Bitcoin’s movement down over the past several weeks seems to have vastly changed the narrative about where Bitcoin is headed next. Throughout much of August, Bitcoin’s reaches over $12k seemed to inspired analysts to think big: Bitcoin was headed toward $20,000, no, make that $50,000.

Now, the narrative around Bitcoin seems to have returned to whether Bitcoin can hold past the $10,000 mark.

However, the fall back towards $10,000 may not be entirely unwelcome. CoinTelegraph reported that “over the medium to long term, traders expect Bitcoin to recover and perceive the ongoing consolidation phase as a healthy pullback.” 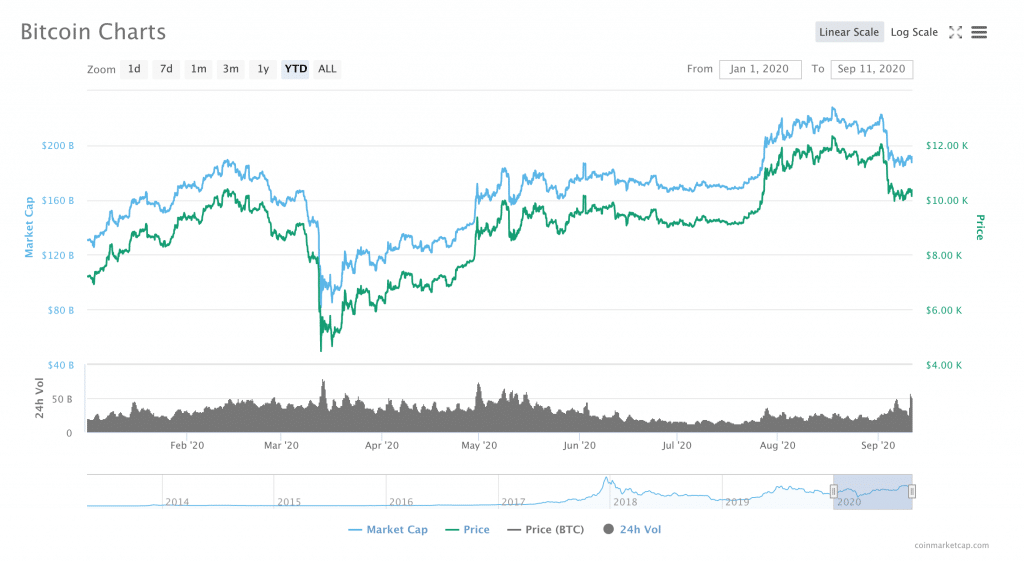 In other words, this latest pullback could be the latest purge of speculative overbuying from the price of BTC. After all, the hold above $11k that took place throughout much of August may have brought buyers into the market who were exclusively interested in short-term gains.

Bitcoin Teeters on the Edge of $10k

On the other hand, the CME gap that was formed around the $9,700 mark last week still remains a threat. A ‘CME gap’ refers to a phenomenon in which Bitcoin markets make a sharp, sudden move outside of regular trading hours for CME’s Bitcoin futures markets, which results in a literal ‘gap’ in Bitcoin price charts.

Often when this happens, the Bitcoin price will eventually fall back to the level where the gap was originally formed. This retrace in the price of Bitcoin ‘fills’ the gap. Therefore, because the gap is around the $9700 zone, some analysts believe that Bitcoin is headed at least that low before any meaningful, long-term gains will be possible.

Although, there are some analysts who believe that Bitcoin is such a hot commodity that the gap may remain ’empty’.

For example, renowned cryptocurrency analyst, Willy Woo tweeted that “I’d say there’s a fair chance this CME gap may not get filled, so far it’s been front-run for liquidity. Every dip snapped up,” he said.

Woo also added that “if so it’ll be the first CME gap on daily candles that remains unfilled,” a point that was contested by several other Twitter users.

I'd say there's a fair chance this CME gap may not get filled, so far it's been front run for liquidity. Every dip snapped up.

If so it'll be the first CME gap on daily candles that remains unfilled. pic.twitter.com/EkHDMuS6aY

Woo also tweeted a chart that indeed showed, when Bitcoin was headed for $9,700 earlier this week, buyers jumped on the BTC dip before it got too low.

BTC Bears May Be in the Majority

Still, while BTC may not be at a real risk of falling below $9700, some analysts do find the fact that Bitcoin seems unable to recapture the $10,500 resistance level concerning.

Indeed, while BTC bulls may be buying up Bitcoin when it begins to approach $9,700, Bitcoin bears seem to be consistently selling around $10,500. The fact that Bitcoin has been unable to surpass this level suggests that BTC bears may be in the majority this time around.

Still, while BTC has waffled between $9,800 and $10,500 for the past week, traders still seem to be uncertain where Bitcoin is headed next.

The DeFi Rollercoaster Seems to Be Descending

The uncertainty that has been rife in Bitcoin markets also seems to have affected altcoins, particularly those in the DeFi space.

Indeed, Finance Magnates reported earlier this week that a number of assets in the DeFi space also seem to be ‘waffling’.

For example, on Wednesday, a number of analysts across the crypto space announced that the DeFi ‘bubble’ had officially popped, and indeed, data from cryptocurrency market analytics firm, Messari showed that the prices of 32 out of 37 DeFi tokens were down over the course of 7 days.

However, by Thursday, the picture looked quite different: around noon CET, data from Messari showed that 32 the 37 tokens were back in the green, including the tokens that had lost out worse, earlier in the week.

However today, DeFi markets are a mixed bag: over two-thirds of the DeFi assets tracked by Messari were back in the red.

The assets that were in the green showed relatively modest gains; Yearn.Finance led the pack with 24-hour increase of 13.76 percent, while Mainframe, Loopring and Gnosis followed closely behind with gains over 10 percentage points. 0x, Airswap, Synthetix, Terra, Cream, Blockmason, Kava, and Wrapped Nexus mutual were all in the green for less than 10 percentage points.

After Months of Red-Hot Gains, DeFi Tokens Seem to Be Cooling Down

While these kinds of gains may be significant in traditional markets, and even for other kinds of crypto assets, the DeFi space has been so hot for the last several months that any upward movement below 20 percent almost seems paltry.

Indeed, a number of DeFi assets have consistently made headlines throughout the course of the year for their eye-popping growth. For example, Finance Magnates reported in August that the price of Band Protocol tokens had increased 6000 percent, and that Chainlink tokens had increased more than 659 percent since January 1st.

However, like Bitcoin, August seemed to be a bit of a high point for DeFi tokens, and while the DeFi space may be geared for gain in the long term, the DeFi space could be staring at a serious market correction, right in the face.

In fact, the correction already seems to have begun: earlier this week, crypto Twitter commentator @cryptounfolded pointed out that in addition to token prices, the total amount of value ‘locked’ in DeFi protocols had also taken a hit.

Ethereum Congestion May Be Contributing to DeFi Downfall

What is driving the prices down? In addition to the pressure to sell that may be rippling out from Bitcoin markets, DeFi may also be feeling the aftereffects of several recent incidents that took place over the course of the last 2 weeks.

In particular, assets that have ties to the Ethereum ecosystem may have been affected by a massive increase in transaction fees and decreases in transaction speeds during the first few days of this month.

Indeed, according to on-chain analytics firm, Glassnode, miners on the network earned over $500,000 in just 1 hour on September 1st. Around the same time, Ethereum network users reported transactions taking much longer than usual to complete.

The high fees and slow speeds were the result of congestion on the Ethereum network, a factor that has many questioning the long-term viability of Ethereum as the ‘backbone’ of the DeFi ecosystem.

The more traffic there is on the network, the more congested it becomes; as it becomes more congested, fees go up, and transaction times slow down. In the long term, this means that DeFi developers may be seeking alternatives to Ethereum.

Beyond Ethereum, the DeFi space was also marked by the SushiSwap saga that took place over last weekend, a series of events that had large swathes of the community accusing a popular new protocol of being an exit scam.

The trouble began on Saturday, when the pseudonymous founder of SushiSwap, known only as ‘Chef Nomi’, suddenly made the decision to sell all of his SUSHI tokens, which totaled roughly $13 million.

The move caused the token price to suddenly take a significant dive: after peaking at $11.27 on Tuesday, September 1st, SUSHI prices dropped to as low as $1.21 on Saturday. This led the crypto community to initially decry the project as an exit scam. Though, control of the protocol was eventually handed over to members of the DeFi community.

In addition to the SushiSwap incident, a liquidity mining DeFi project on the EOS network known as Emerald Mine (EMD) was accused of an exit scam.

While incidents of fraud have been relatively few and far between in the DeFi space, compared to the ICO space in late 2017, both incidents have been the subject of much controversy.

However, Corey Caplan, partner of the DeFi Money Market Foundation, pointed out to Finance Magnates that, though much less frequent, incidents of fraud in the DeFi space could be having a large impact.