Bloomberg has reported that an unidentified person familiar with the situation has revealed that Goldman Sachs has made plans to offer “certain clients” clearing services for the Bitcoin futures contracts that will be launched on CBOE and CME within the next two weeks.

The report explained that the clients that will gain access to the Bitcoin futures options will be decided on an individual basis. The firm has no plans to act in anything beyond an agency capacity, and will not become a market maker or hedge inventories itself.

While Goldman Sachs has historically had a more open-minded approach to cryptocurrency than its peers on Wall Street, the firm is hesitant to fully embrace the launch of the Bitcoin futures trading market. In an emailed statement to Bloomberg, GS spokeswoman Tiffany Galvin said: “Given that this is a new product, as expected we are evaluating the specifications and risk attributes for the bitcoin futures contracts as part of our standard due diligence process.”

Despite the decision to offer some clients access to Bitcoin futures, Business Insider reported that GS does not yet have a bitcoin strategy; indeed, the volatility of cryptocurrency makes it a strange beast that the traditional trading world really doesn’t have a theoretical framework for. Speaking about Bitcoin on Bloomberg TV, Goldman Sachs CEO Lloyd Blankfein said: “Something that moves up and down 20 percent in a day doesn’t feel like a currency, doesn’t feel like a store of value.”

Goldman Sachs certainly isn’t the only big bank considering offering Bitcoin futures trading, but even in the limited capacity that it has decided to start offering access to the options, it has already stepped ahead of its contemporaries. According to a report from the Wall Street Journal, Citigroup, JPMorgan, and Bank of America Merill Lynch are “pressing the pause button” on the Bitcoin options.

Indeed, there are quite a few significant figures in the financial world that are skeptical of Bitcoin’s long-term valuation and even afraid of the effects that offering Bitcoin futures options could have on the world economy should something go wrong.

Just a few weeks ago, Interactive Brokers Chairman Thomas Peterffy took out a full-page ad in the Wall Street Journal to publish an open letter warning CME of the possible consequences of offering Bitcoin futures options. According to him, Bitcoin futures trading could have the power to take down “the entire economy.”

In any case, the anticipation of the launch of Bitcoin futures has significantly contributed to the absolutely astounding rise that the price of Bitcoin has undergone over the last several weeks. Despite facing some healthy corrections, BTC has fattened by a few thousand dollars a pop over the last few days. When CBOE officially launches this coming Sunday – well, it’ll be interesting, to say the least. 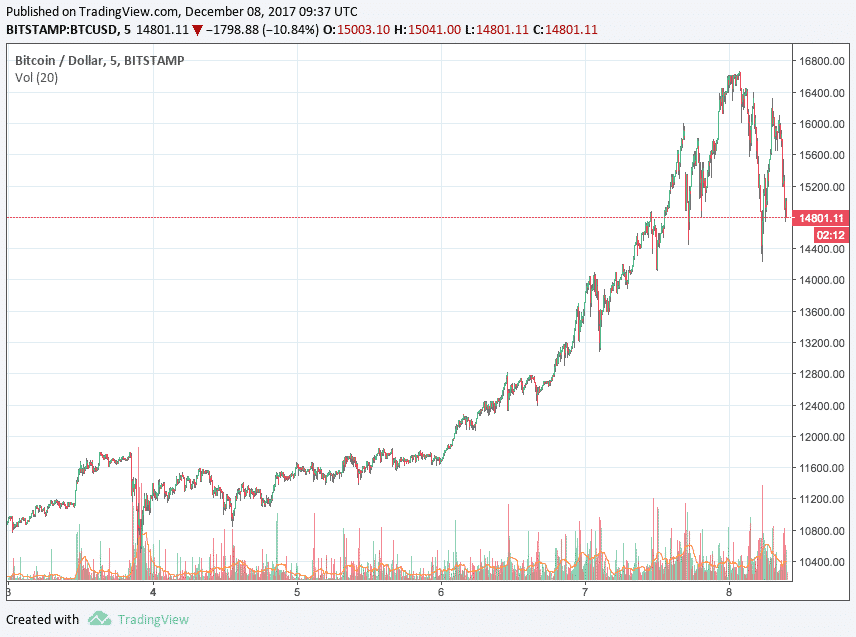