GHash, operator of the mining pool that has come under fire for attaining 51% of the total hashrate, announced via its blog that it has committed to capping its hashrate to below 40%.

GHash had come close to the 51% mark on several occasions over the past months. They finally breached the level in mid-June, leading to panic and outrage in the crypto world. The Bitcoin price had declined as much as 11% in 12 hours, eventually recovering. No suspicious activity was observed in the network.

When a miner reaches 51% of the total work performed on the Bitcoin network, it technically gains privileges granted by Bitcoin’s rules of consensus to double spend transactions and block others from proceeding. This effectively undermines the network’s integrity. Many leaders in the community have argued that the potential damage to the network is limited and that attackers have little to gain. Others argue that the potential still exists for malicious attackers to undermine Bitcoin even if they have little to gain.

GHash defiantly defended their operation shortly after the incident. Facing calls to reduce their hashing power, they shot back that a permanent solution should be found instead of workarounds that slow down their highly popular and successful operation.

They seem to have relented. In a blog post titled, “Official statement on 51% threat and closed round table”, GHash says that it committed to capping its hashrate below 40%, based on its round table discussion at the recent CoinSummit in London. Should they approach the level, they will ask miners to move their hardware off to other pools.

The decision was clearly not their first choice and may have been reached begrudgingly. Indeed, GHash makes sure to immediately point out 2 caveats. First, they will be working to organize Bitcoin developers and experts to find a hard technical solution to the problem. Second, they do not want to be the only one making such commitments:

“With this statement, we invite other mining pools to become more transparent to the community, issue similar statements from their sides and declare that they won’t overcome 39.99% of the Bitcoin hashrate as well. We believe that mining pools should support the statement, since any of them can possibly take leading positions and appear on GHash.IO place.” 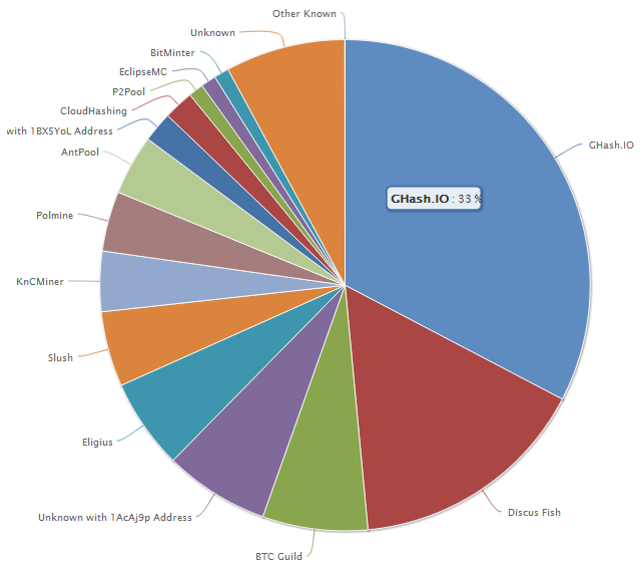