On Friday, Ghash momentarily breached the dreaded 51% threshold, sending the Bitcoin world into a panic as miners were urged to get out of the pool immediately.

They had been urged to leave throughout much of last week as Ghash’s share bounced around between 40% and 50%. But little concrete action was taken until the level was breached, upon which Bitfury pulled out a large chunk of mining power from the pool.

No malicious activity was reported to have taken place as a result of the breach. Currently, Ghash’s share of mining power sits at 42%, according to blockchain.info. 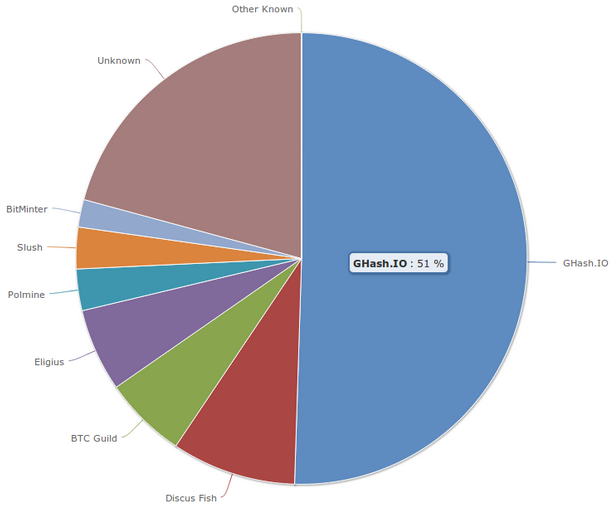 In a 51% attack, transactions can be double-spent and those from elsewhere can be prevented.

Opinion has been divided as to what the 51% threat really means for Bitcoin. Media outlets reporting from a broader business perspective are viewing this as a major threat for Bitcoin. Business Insider, for example, believe cryptocurrency faced “its worst crisis of confidence since the fall of Mt. Gox.”

Bitcoiners would be sure to point out that while the threat posed by a 51% attack is a point of contention, the fall of MtGox was in no way a threat to cryptocurrency, just like the collapse of a hedge fund poses no threat to securities. To the outsider though, the technicalities behind these events are drowned out by the noise of their headlines.

Business Insider then relays a post by two Cornell computer scientists, who posed the question: “Is this really Armageddon” and responded:

“Yes, it is. GHash is in a position to exercise complete control over which transactions appear on the blockchain and which miners reap mining rewards. They could keep 100% of the mining profits to themselves if they so chose. Bitcoin is currently an expensive distributed database under the control of a single entity, albeit one whose maintenance requires constantly burning energy — worst of all worlds.”

On the other side, Gavin Andresen, chief scientist at Bitcoin Foundation, argues that those carrying out the attack “would find themselves in legal trouble”, as their actions are transparent. The attackers would also be discovered by the community, who would punish them through various technical or social solutions.

Andreas Antonopoulos, chief security officer at blockchain.info, highlighted at a talk that the most that can be affected in an attack is the next block.

In general, it is agreed that the the attackers have very little to gain economically. This, however, doesn’t preclude suicidal or “terrorist-like” attacks.

Other enthusiasts swear that “the developers would never allow that [a 51% attack] to happen.”

One of the core developers though, Peter Todd, publicly disclosed that he plans on selling 50% of his bitcoins due to concerns of “mining centralization.”

Can we have 100% decentralization?

The realization of the 51% level and the proposal of various remedial measures calls into the question one of the fundamental tenets of digital currency: decentralization. There is a yearning to cast off the yoke of authorities- but would it ultimately be replaced with something else?

In a perfectly liberated currency, the 49% should not be subject to the will of the 51%. Anything should go. Obviously, it would lack basic checks that to make it a currency and would simply cease to function. So the democratic approach doesn’t seem so bad, but this starts getting you closer to fiat (unless you’re of the view that fiat is managed through an entirely undemocratic process).

Either way, the current crypto system, and likely any future one, is effectively managed democratically. It is even entrusted, to a large degree, to a group of experts, who function as leaders assumed to have its best interests in mind. And to prevent 51% attacks and the like, these trusted leaders need to introduce (i.e. legislate) a plethora of rules, sometimes evolutionary and reactionary in nature. They effectively become lawmakers, with the community as their citizens. So it boils down to a question of trust and democratic systems.