The “mythical” aspects of blockchain still play an important role in the industry and the technology. Just about everyone who’s been involved in the space for longer than a few minutes has heard of Satoshi Nakamoto and the vision of decentralization that started it all.

However, the industry is shaping up to be quite different than many of its earliest participants may have thought that it would be. Blockchain technology and crypto still play an important role in the lives of many individuals, but institutional capital is playing a huge role within the space, from both a development and an investment perspective.

Nameri shared her thoughts on market trends in blockchain, the impact of regulations, and how her company is working to shape the future of the blockchain space. 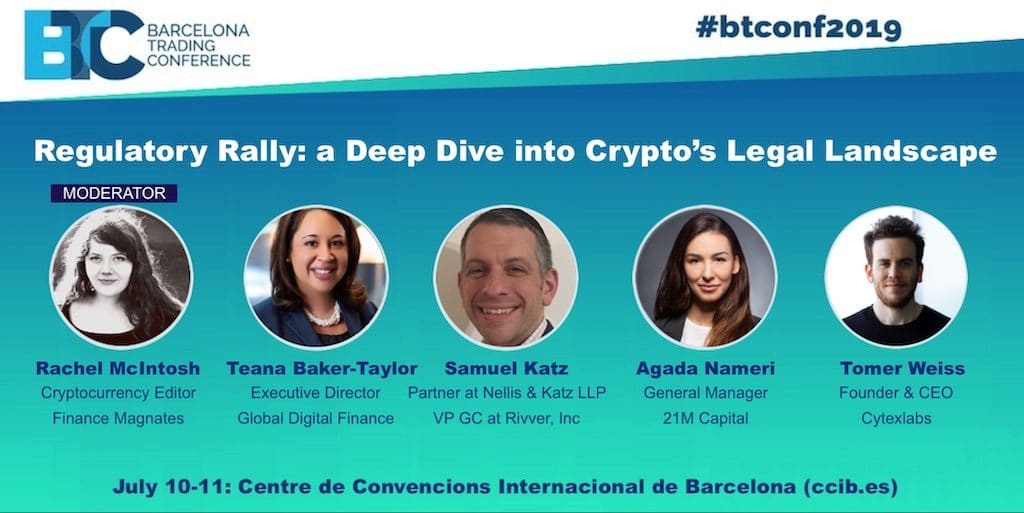 Agada Nameri will appear as a panelist at the upcoming Barcelona Trading Conference on July 10th and 11th. Click this image to get your tickets today.

”We’re Not OGs”, But 21M Was “Well-Positioned” When the Time was Right

Although Nameri said that her company is not an “OG,” they have been in the blockchain space for much longer than many other entities.

“We got into the blockchain space about three years ago,” she explained. “We were early investors in one of the leading companies in the space called Simplex, and also in eToro…[we got involved] pretty early on.”

“In 2017, when the ICO market started booming, we were really well-positioned to take an active role in the space.”

”iAngels as a strategy invests in early-stage technology–in early-stage startups–in sectors or fields that are early on in the innovation curve. So, we have a focus on autonomous vehicles and autonomous in general, which is kind of at the early days of the industry–and AI, which is kind of in the early days of figuring out how to use AI to benefit businesses and increase ROI.”

It’s an important time for AI in Israel: “Over the last five years, AI startup exits averaged $121 million per deal, selling for 5.6 times their total funding at the date of exit. This multiple has climbed to 8.3 times so far this year”. https://t.co/jC5z6pVChB

In general, “we look at industries that are kind of ‘blue ocean’–that are not saturated, that the innovation is still at the early stages.” In these industries, “the potential is huge, and there’s the potential to help how [the future of the industry] will look like.”

“Blockchain really fit into that,” she continued. “What this technology holds in terms of its ability to change financial structures, change the way that we interact with each other, change the way that value is being created and being distributed; how decisions are made, how organizations operate.”

“And at the time [we got involved]–but also now–it was still at the very early days of the innovation cycle. That fits well within our general strategy, so that’s how we got involved.”

Shaping the Future of the Industry

Agada explained that in addition to tapping into massive amounts of capital that early-stage companies in early-stage industries can bring, investors who put capital into these kinds of companies also have an opportunity to play an active role in how the future of the industry is shaped.

“First and foremost, we aim to invest in good entrepreneurs that share our core values, and the way that we look at the world, and that are really trying to do something good to the global community. That’s what drives us.”

“And we look at it like a partnership,” she went on. “You invest in an entrepreneur and you realize that it’s going to be a long way until both of you see the project or the dream come to fruition. So, we look at it from a long-term perspective and we look to partner with people that are good people, that are trying to build something that really does something good for the industry and good for people.”

iCapital has officially changed its name to 21M Capital, inspired by the fact that there are only 21 million Bitcoins ever to be minted and the emergence of cryptocurrencies as a new form of capital in the 21st century.
check out the 21M Capital platform-https://t.co/nVLuLxs1Ev

“If we look, for instance, at the area of decentralized finance, or digital payments, where we kind of see the most potential in the coming years–we look to partner with and to support good entrepreneurs that are mindful of their investors and their community, and that strive to create value to their network, to their investors, to themselves, to the industry that they’re disrupting.”

In terms of disruption, Nameri said that she sees four market trends where blockchain is making a particularly big impact.

“The first one is crypto and institutionalization–meaning that we see more and more financial institutions going into crypto, and they require institutional-grade infrastructure and services like custody and compliance and data research, order execution–and that space is really kind of prone for disruption in the very short-term.”

“[We see] companies like t0, or Bakkt, or ErisX, or BitGo, or other companies that are competing with them as the first movers to enable financial institutions and the more traditional financial industry to come into the space. They’re kind of a bridge,” she said.

“On the one hand, it’s not the dream of decentralized blockchain,” she conceded, “but on the other hand, you have to ‘walk the way’–you have to get there somehow. And these are really important players that are helping bridge the gap and getting us there.”

Another place where Nameri sees blockchain making a big impact is the digital payments industry. “And that again goes to bridging the gap between the blockchain world and the traditional world.”

“With the emergence of the stablecoins, the market is getting prepared for the transition from electronic payments (credit cards and such) into digital payments. We see that with the Telegram token, which is supposed to be a digital currency–a means of exchange, Facebook’s Libra, and other payment infrastructures, [including] stablecoins”

“The third focus for us–which is really kind of going into what we are more interested in–is decentralized finance.”

“This is a sector where we see huge potential in the coming years,” she explained, “and we also already see companies that are operating in the space with impressive products and impressive activity, like Maker with MakerDAO…and Augur and Bancor, and IDEX.”

“The decentralized financial industry is essentially conventional financial tools built on blockchain to minimize counterparty risk and to remove intermediaries, and so on, which is really the ‘low-hanging fruit of what blockchain can enable.”

“During 2017 and 2018, it was all about the layer-one native blockchains..that’s still interesting, but we see potential in layer-two solutions, including sidechains and other technologies that provide scalability and privacy and interoperability and other solutions to really make the layer-one usable for all of these applications that we discussed.”

The Investor’s Perspective: Regulation is a Good Thing for the Blockchain Industry, But Only if it Comes with Understanding

“When ICOs started, it was really the Wild West–and it still is, in some senses,” Agada said. “There was beauty to it also, because it started off as a way to get the developer community engaged.” Nameri said that ICOs sent an important message to the developer community–”here, we’re building this protocol, come, be a part of it–be part of what we’re building, participate in the token sale, help us build it together.”

Despite the value of the #cryptocurrency market decreasing by 60% 6 months into this year, the amount raised via #ICOs in 2018 has reached a record high. @iAngelsCrowd
founders shared their thoughts in this interview with @globesnews
https://t.co/Co9OBu9wO3

“We all enjoyed the upside [of this],” she continued. “Which is a beautiful idea, and a beautiful concept.”

“At the end of the day, what happened (in late 2017, early 2018–or probably even a little bit before that) is that ICOs and public sales did not serve the developer community and [also] the retail investors who saw the opportunity to get involved but didn’t necessarily understand what they were getting into–what [their rights and protections were] and also the risks.”

However, she did make an important point–in order for regulation to make a positive impact on any industry and its investors, “the regulator [needs to] understand what they’re regulating.”

“The risk with regulation in the space is that the regulator will implement regulation that already exists for other things, but is not entirely suitable for this industry.”

“The risk is that it will inhibit development of disruptive technology,” she said.

“And I think they’re doing it,” she added. “There’s a lot of anticipation for regulation in the space, and for the past two years, it’s been constantly changing and re-evaluated, and that created a lot of unclarity in the market, and a lot of doubt.”

“And in 2017, every new announcement of regulation really moved the market dramatically,” she said. “The uncertainty around that created a lot of volatility in the market.

“The bottom line is that regulation is a good thing, but it needs to come with understanding of the industry that is being regulated.