However, Facebook users will likely have more direct interactions with the social media giant’s own cryptocurrency, which was revealed around the turn of the year. Facebook’s crypto is set to launch this year.

It is said that Facebook’s cryptocurrency will be used in tandem with WhatsApp, the encrypted messaging platform that the company owns. A report from the New York Times reported that “the company is working on a coin that users of WhatsApp, which Facebook owns, could send to friends and family instantly.”

However, it’s important to note that Facebook itself still hasn’t come out and said exactly how its cryptocurrency will work and what it will be used for. The New York Times’ information came from “five people briefed on the effort who spoke on the condition of anonymity because of confidentiality agreements.”

Indeed, despite the hype around Facebook’s cryptocurrency, the details of the project are still largely unknown.

Here’s what we do know about the project so far, and what it could mean for the global crypto, data, forex, and remittance industries.

“The news of Facebook launching their own cryptocurrency has been spreading fast, but at this point it’s still mostly all unconfirmed,” wrote Mark Moss, Founder and Market Analyst at Market Disruptors and Signal Profits, in an email to Finance Magnates. “We have seen a few high-level news sources run with stories but they have unconfirmed sources.”

However, Moss did point out that “we have seen Facebook making big moves recently – acquiring some high-level industry insiders to help run the operation as well as a reported 50 or more blockchain developers.”

While no one is going to stop #Facebook from launching any #cryptocurrency they like, the fact that #crypto will reach to over 2bn people through social messaging makes me bullish on coins that are
a) high-quality
b) while well suited for #Memes ?$TRTL #TurtleCoin onwards! ? pic.twitter.com/1t4fQOoxUR

Still, it’s impossible to know exactly how the cryptocurrency will be used or who it will be marketed. However, “it’s rumoured that India might be its first target because India has some of the highest remittance services in the world.”

“By putting the Facebook coin into WhatsApp, it could allow Global participants to transfer money quickly and for almost no cost. This would tap into the 20 trillion dollar payment remittance industry.”

A Growing Number of Messaging Apps Are Creating Their Own Cryptocurrencies

Facebook is the latest of several messaging platforms that have made the leap into the cryptocurrency world. Encrypted messaging app Telegram made history last year with its private ICO, which raised over $1.7 billion. Signal, another encrypted messaging app, is also reportedly working on a coin of its own. South Korea’s Kakao and Japan’s Line messaging apps have also been developing their own coins.

The crypto coins associated with the messaging apps seem to be decentralized attempts to echo the payment services offered by companies like Paypal and Venmo–instant, affordable payments that users can easily send to one another via smartphone. The New York Times also reported that the WeChat messaging system’s payment features have become hugely popular in China. 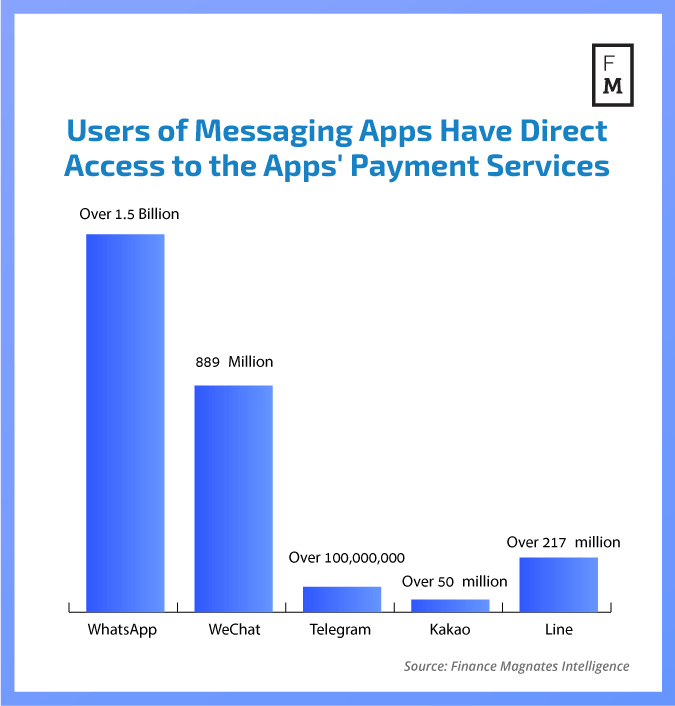 “Bitcoin and Ethereum are open source networks that are completely decentralized. What this means is that there is no central party that controls the network and therefore there is no one that could sensor transactions, stop them, block them, or reverse them. Being an open source Network allows everybody to view the code to understand exactly how it works.”

“It therefore gives us what we call a ‘trustless’ environment – meaning we do not have to trust the essential administrator because the code is open and everybody can see it. Bitcoin and Ethereum are also ‘permissionless’, meaning anybody can join and use the network without permission.”

“These features: trustless, permissionless, Censorship Resistant and Immutability are what make Bitcoin and Ethereum so valuable.”

“Facebook’s coin, like the recently-launched JPM coin, are on the complete other end of the spectrum,” Moss continued. “They are closed-off private networks. Because they are closed-off and private, we have to trust Facebook and JPM coins, as opposed to Bitcoins trustless features. This also means that because they are centrally controlled, Facebook or JPM coin could freeze your accounts at any time, block your transactions, reverse your transactions, or completely shut you off the network.”

Nick Spanos is, founder of bitcoin trading floor Bitcoin Center NYC, echoed Moss’ sentiments in an email to Finance Magnates. “Based on all available reports, Facebook Coin is nothing more than a centralized payment system,” similar to PayPal, Visa, or Venmo.

“In light of the recent scandals around Facebook’s misuse of data, they should take more steps to protect user privacy rather than designing methods to further centralize their system to gather even more data on hundreds of millions of users.”

“This Is a Perfect Environment to Release a 100% Auditable and Surveillable Currency.”

However, Konstantin Brazhnik, Chief Technology Officer of the Juris Project, pointed out to Finance Magnates that Facebook’s illustrious data-gathering policies will likely not have significant negative effects on its cryptocurrency. “Facebook has no incentive to adhere to the counterculture ethos that surrounds cryptocurrencies such as Bitcoin and Ethereum,” Brazhnik explained, referencing the decentralized, ‘trustless,’ and immutable aspects of the Bitcoin network.

In fact, “Facebook has managed to succeed exceptionally with plenty of bad press about its data sharing practices. Clearly its users are not that concerned or the value it delivers is worth the price of privacy.”

“This is a perfect environment to release a 100% auditable and surveillable currency,” he explained.

Indeed, “Any entity releasing a stable coin will be held to an exponentially higher standard than the US dollar in terms of AML and KYC capabilities. What better entity to deliver it than the one that knows all of the embarrassing moments and confessions of its own users.”

“Imagine seeing a Facebook marketplace ad for a house, clicking a button, and instantly owning it. A cryptocurrency paired with Facebook’s extensive knowledge of its members is a perfect environment in which to build frictionless financial vehicles which automatically qualify buyers and clears transactions...if data is the new oil, then Facebook is Saudi Arabia.”

Further, Facebook’s cryptocurrency–or a similar financial vehicle–could seriously take off if it manages to position itself as an easy vehicle for remittances and forex.

“In the US, we take our fiat currency for granted, after all, it is the de facto global reserve currency,” Brazhnik wrote. “However as soon as one steps a foot outside of the US borders, they feel the pain of global currencies that fluctuate with market and political forces. A Facebook or Telegram has the potential to smooth these volatilities in a way that consumers will flock to them just to avoid the uncomfortable and obsolete practice of fiat currency exchange.”

However, Facebook (or any similar system) will need to work out how its coin will be exchanged back into fiat currency in each given country before it can really act as a global vehicle for remittances and exchange.

Sandeep Todi, cofounder of remittances company REMITR, told Finance Magnates that, for example, “No bank in India will support conversions from crypto. Payments into India in INR need to be done using a special account called RDA (Rupee Drawing Account), which can only be opened with a Tier 1 bank (which in turn does not fancy working with crypto companies).”

Indeed, the details of Facebook’s currency still need to be fixed. However–if Facebook’s cryptocurrency manages to gain enough users, the world could change as a result.

interesting point. I do agree with Brazhnik’s analysis. Facebook is in the best position to offer a de-facto world reserve payment system that could easily outdo paypal. I wonder if they would have to get a money transmitter license? And how other central bank around the world would react. I guess as long as they get a cut, they would thank FB. Google is a close 2nd competitor, Amazon.com is 3rd, but they do not have the global messaging reach that Facebook does. It’s actually kind of scary, and a serious anti-trust violation on several levels for Facebook/Google/et. al. to… Read more »