2020 has been a dramatic and powerful year for the cryptocurrency space as a whole: Bitcoin’s crashes and surges, waves of new users, and changes in monetary policy seem to be paving the way forward for further growth of the crypto space.

However, there is one part of the cryptosphere that has charged ahead of all else: DeFi.

Indeed, Bison Trails chief executive and co-founder Joe Lallouz recently told Finance Magnates that “the pace of innovation in the DeFi space has been astonishing.”

“Two years ago, DeFi didn’t exist,” he said. “For all intents and purposes, DeFi was not a thing two years ago–it was just a few folks at a meetup who were talking about this idea that we could have finance that was built using smart contracting platforms and systems.”

Now, however, “new protocols, new pieces of technology that fit into the different protocols–everything from liquidity pools to automated market-making to lending to insurance: literally everything across the board is sort of being built in the decentralized finance space.”

This explosion of development has also been met with an explosion in the prices of some of the tokens that are associated with various DeFi protocols. To name just a few, Chainlink’s LINK, the Band Protocol’s BAND, and Compound’s COMP have all made headlines with their eye-popping price movements.

What is driving the pace of DeFi innovation forward? What does it mean for the future of the cryptocurrency space? And is DeFi ready for the ‘mainstream’ world?

Steven Becker, chief operating officer and president of DeFi platform MakerDAO, told Finance Magnates that DeFi space was already building momentum as 2020 began: “at the start of the year, DeFi markets hit $1 billion in locked-up assets – marking the industry’s biggest milestone at that time,” he said.

However, “since then, there has been an explosion in investment and value as DeFi projects address core pain points in the existing global financial space: access to payment rails, credit and financial transparency.”

This expanding interest in DeFi may be a magnified version of what is happening in the crypto industry more generally: “with so much uncertainty in the world, people are looking towards an alternative solution,” Becker said.

Indeed, cryptocurrencies as a whole seem to be increasingly attractive to a global public whose faith in traditional monetary systems has been shaken. With the economic fallout brought on by the COVID-19 pandemic and the resulting changes in monetary policy, a number of analysts agree that people are looking for alternative ways to protect their savings.

This could explain the reason for DeFi’s explosive growth in 2020: “as we make our way to the $10 billion- locked assets milestone, the numbers are proving that people see the value in using a more transparent and efficient solution,” Becker said.

He explained that “DeFi has the potential to completely reinvent the world’s financial systems, merging the scale and familiarity of the traditional economy with the security, efficiency and transparency of the public blockchain. The security, efficiency and transparency inherent in the public blockchain will allow for innovation and growth like we haven’t seen in modern times.”

DeFi’s growth has continued to expand along with the number of potential use cases for decentralized finance platforms.

According to Becker, these include “generating credit and creating a loan for yourself”: DeFi technology can enable the user to “own the whole experience in that they are their own bank, using their own assets as collateral.”

DeFi platforms can also be used to store credit. “Instead of trusting money to managers of banks or funds, users control where their money sits and how they use it.”

Additionally, DeFi can be used to transfer credit: ‘users can engage with the traditional payment rails (Visa, etc) or use the public blockchain to exchange funds around the world in an instant,” Becker explained.

“Further, they can choose to invest in assets that are completely unavailable to consumers in the current landscape.” These could include “fractions of a world-famous piece of art, or investment vehicles traditionally reserved for institutional players,” including certain kinds of investment funds and trading contracts.

Yield-Farming and Staking Are Bringing in Waves of New Users

In addition to the creation of DeFi-based systems that replicate traditional financial services, DeFi platforms are also being increasingly used to provide new kinds of earning opportunities for their users.

For example, Gregory Keough, chief executive and founder of the DeFI Money Market (DMM) Foundation, pointed out that “yield farming has been a 2020 phenomenon in which cryptocurrency traders are able to garner even more return-on-investment.”

Keough said that users can use platforms like DMM “to mint tokens, pool them together with some of the underlying tokens on Uniswap to create a secondary market, and then stake these tokens in the liquidity pools to earn more of the protocol’s governance token.”

“Working this process can enable some yield farmers to earn more than 100% APY,” he said.

Other blockchain networks incentivize their users to stake directly into their networks, creating yet another potential earning opportunity for token holders who are willing to hang onto their coins for extended periods of time.

However, not everything in the DeFi space is sunshine and roses: DeFi has also had its share of negatively defining moments this year, moments that seem to indicate that the DeFi ecosystem is not ready for ‘mainstream’ adoption.

For example, in late April, the dForce ecosystem protocol Lendf.me temporarily lost 99.95% of its funds from a hacking exploit (the hacker later returned the funds). In March, infrastructural issues on MakerDao were exposed when the price of ETH sharply fell; in June, Balancer was hacked for $500,000. The list goes on and on.

In other words, the DeFi ecosystem does not seem to be at a stage where platforms can truly be trusted to operate with users funds, particularly for users without expendable wealth.

However, there is quite a bit of evidence to show that the majority of users who currently operate on DeFi platforms are, in fact, entities with a bit of extra cash to flash.

Multicoin Capital co-founder and partner, Kyle Samani noted this phenomenon in an interview with Finance Magnates conducted earlier this year: he said that usage in the DeFi space “is extremely circular–basically, there’s on the order of between 100 and 1000 people who are ‘ETH Whales’, who comprise roughly 90-95% of all DeFi protocols,” he continued, adding that “this is pretty well-documented at this point.”

Therefore, the fact that the number of DeFi users has stayed relatively low so far, a fact that has caused quite a lot of griping amongst DeFi skeptics, may be a positive thing: Bison Trails’ Joe Lallouz explained that while DeFi is being “battle-tested,” it’s better that the users of the platforms are in a position to understand and accept the risks.

Joe said that currently, “everyone who is involved [in DeFi] thinks, oh, this is really interesting–let me try understanding what it means to take out a loan in crypto; let me leverage these assets, and maybe I can do something interesting with them.”

The Backbone of the DeFi Ecosystem May Be up for Reconsideration

In addition to hacks and other protocol exploitations carried out by malicious actors, the DeFi space may have some other technical kinks to work out before it can truly be ready for mainstream users.

Stuart Popejoy, co-founder and president of blockchain infrastructure firm Kadena, told Finance Magnates that the DeFi space may have to seriously re-evaluate the usability of its home base: the Ethereum blockchain.

“Right now, DeFi spends $500K+ in trading fees per hour because ETH1.0 can’t scale,” he said. “When DeFi moves to a scaled layer-1, then we can see if it’s mature enough for the mainstream.”

Popejoy also does not believe that the upgrade to ETH 2.0 will improve the blockchain enough to make it viable for widespread adoption. Therefore, he believes that “the biggest 2020 development in DeFi is the demise of the narrative that ETH 2.0 is a viable future platform,” he said.

Therefore, he believes that the price of Ether tokens, $469 at press time, is due for a correction. “ETH 1.0 is clearly on a warpath to bleed millions of dollars in gas fees over the next couple weeks, and eventually there will be a new equilibrium when enough gas gets emitted to bring prices back to reality,” he said.

After all, Ethereum does have a track record for poor performance during times of high traffic: “in late 2017, CryptoKitties was a collectables game new to Ethereum that exploded in popularity and instantly caused the entire network to slow to a crawl. Non-CryptoKitties transactions, such as ETH transfers, went from minutes to hours and even days for completion.”

”The Rent Is Too Damn High”

In addition, Ethereum set a new record for high gas prices just yesterday, with “a single DeFi transaction costing over $10 in fees.”

“ For dApp developers and projects, it was and still is, extremely worrisome,” Popejoy said, adding that “If gas prices are block rent,” the rent is “too damn high.”

“Immediacy, the ability to transact in some predictable amount of time, is an arbitrary popularity contest,” he said. 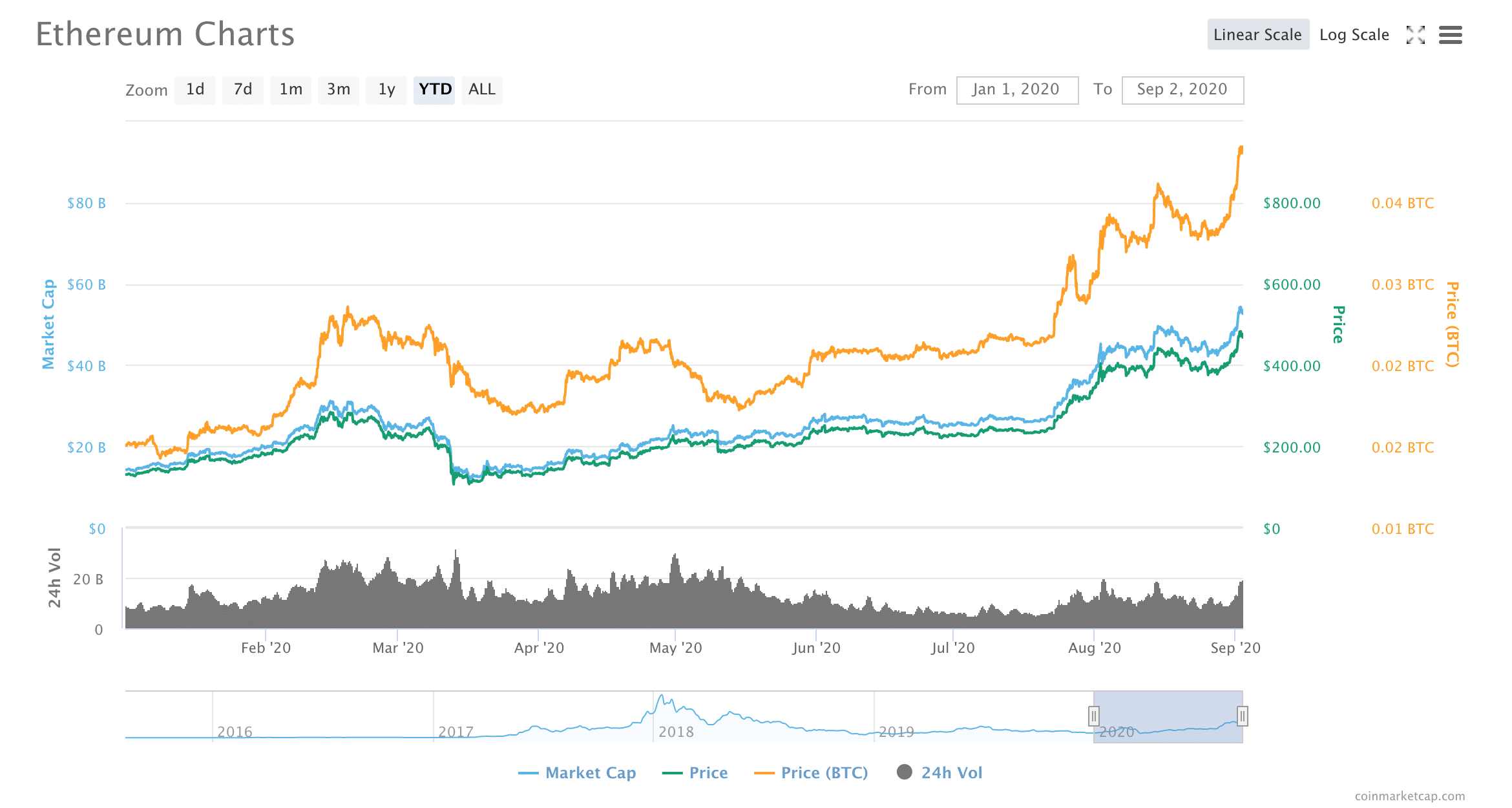 “If you are the developer of an application that provides a time-sensitive service to a minority of Ethereum users, you can find yourself waiting behind a deluge of transactions to serve the latest craze, simply because it is attracting more users than your app. It doesn’t matter that those users represent an entirely different market: your app will still lose based on numbers alone.”

In other words, it seems that the DeFi space, on Ethereum and on other blockchains, will have to deal with a lot more growing pains before the space is ready for the big, wide world. In the meantime, though, watch this space.

What are your thoughts on the development of the DeFi space? Let us know in the comments below.