The new SegWit2x fork, which is scheduled for December 28th, was announced on December 16th. Despite sharing a name with the SegWit2x fork that was cancelled in November, none of the entities involved in the original SegWit2x fork have had anything to do with this reboot.

It seems that the new SegWit2x is an entirely separate project benefitting off of the name of the cancelled one.

In fact, an inquiry to the site’s ZenDesk live chat as to whether or not this SegWit2x had anything to do with the original yielded a simple reply: 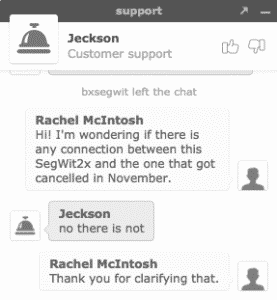 The new SegWit2x claims to have been redesigned with better replay protection in addition to a 4mb block size (the original SegWit2x called for an upgrade to 2mb). Some of the futures markets for the upcoming fork are already live on certain exchanges (ie HitBTC), trading for around 0.1 BTC. The new SegWit2x website (b2x-segwit.io) says that B2X tokens will be available on Yobit.net, NegocieCoins, Exrates, and LocalTrade.pro.

Predictably, the 21 million SegWit2x tokens [B2X] will be distributed on a one-to-one ratio to BTC holders. Jaap Terlouw said that he “promise[s] that all BTC holders will receive not only B2X in the ratio of 1 to 1, but also a proportional number of Satoshi Nakamoto`s Bitcoins as a reward for their commitment to progress.”

The SegWit2x website claims that enigmatic Bitcoin creator Satoshi Nakamoto mined one million BTC tokens, and that the cryptocurrency created by SegWit2x will distribute the one million Segwit2x tokens that would have belonged to Satoshi to the rest of the network’s users. However, there is no indication anywhere on the website about exactly how many of these Satoshi-correction coins will be distributed.

Additionally, there has been no public announcement that the SegWit2x reboot will be conducting a 2,000,000-coin premine, although the premine is plain to see in the SegWit2x’s code on GitHub.

The project’s founder, Jaap Terlouw, has virtually no information about his status as a “developer” anywhere else online, save for a LinkedIn profile listing him as the founder of the SegWit2x project and a TourBar profile that says he is looking for “friends.”

Donna Khyuz, who is listed as the “Business Developer” of the new SegWit2x, has virtually no internet presence. Her photo on the SegWit2x website leads to a dead LinkedIn profile, although she does have a private Instagram account that describes her as a “Crypto Developer, ICO & Blockchain Expert”. There is also a profile on vk.com listing Khyuz as a model along with some free stock photos.

Additionally, Hackology reported that an archived version of Khyuz’s Instagram profile lists her as a “Model, Dancer, Actress, and Business Woman”. While it’s certainly true that being any of these things does not preclude one from also being a blockchain expert, the complete and total lack of any information supporting Khyuz’s position as the latter is certainly suspicious.

Artur Bujnicki, Robert Szabo, and Bartosz Kozłowski, who are listed respectively as the new SegWit2x’s “Senior Software Engineer”, “Core Developer”, and “Business Development.” None of the three indicate anywhere on their LinkedIn profiles that they have any involvement with the new SegWit2x project whatsoever.

Both Bujnicki and Szabo have written on their profiles that they are seeking “new opportunities.” It’s not clear whether either of them know that they are listed on the new SegWit2x website.

Why was SegWit2x Originally Cancelled?

The original SegWit2x fork was rather controversial, born as the result of the ‘New York Agreement’, which was backed by fifty-eight companies located in twenty-two countries across the world. To some, this represented a sort of corporate takeover of Bitcoin.

The original SegWit2x was not supported by Bitcoin Core developers. Among other things, they argued that the fork had been designed without strong replay protection, which is necessary to prevent transactions on the new blockchain formed by a fork from duplicating on the original BTC blockchain.

SegWit2x was finally called off because of the potential that the fork had to fragment the market and damage the Bitcoin ecosystem as a whole. Mike Belshe, CEO of Bitgo, said: “It is clear that we have not built sufficient consensus for a clean block size upgrade at this time. Continuing on the current path could divide the community and be a setback to Bitcoin’s growth. This was never the goal of Segwit2x.”

Why All the Forks?

In the past, hard forks happened as attempts to create an alternative to the Bitcoin network, which has been struggling with how to solve its scalability issues for several years.

The Bitcoin Cash hard fork that took place in early August attempted to solve the problem with a larger block size, which allowed the BCH network to process transactions up to eight times faster than the Bitcoin network. Bitcoin Cash has maintained its status as the most ‘legitimate’ fork, despite rumors of insider trading by its group of developers, Bitcoin ABC.

It was as if the apparent cooling off in the era of ICOs that took place in October inspired blockchain opportunists to seek another way to make a quick buck. Although the ICO market is now stronger than ever, BTC-forked coins seemingly presented an easy way to create a coin that was already in circulation (anyone who owns BTC tokens at the time of fork is automatically entitled to the tokens forked from the original blockchain). In a sense, no one really even needed to buy the coins in order for them to have some value.

As soon as these coins became available on exchanges, however, their holders can ‘dump’ them onto exchanges, picking up profits as the coin quickly loses value. This was the case with Bitcoin Cash, which crashed from nearly $700 to roughly $220 within days of its creation, and Bitcoin Gold, which fell from about $550 to around $140. 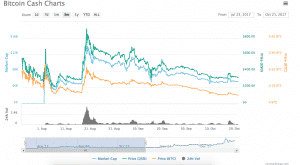 The coins that have been dumped onto exchanges can then be bought up in large amounts at a discount, leaving their markets open to the development of ‘whales’ who are capable of serious market manipulation.

Bitcoin Gold came under scrutiny for what was originally referred to as a “pre-mine”, although its developers later clarified the move as a “post-mine”. In any case, shortly after the creation of Bitcoin Gold, its creators quickly mined 100,000 BTG tokens, essentially granting themselves a multi-million dollar endowment.

Creators of BTC-forked coins can also profit by stealing the private keys of BTC holders who are attempting to gain access to the newly-forked coins. While the Bitcoin Gold developers had no part in the myBTGwallet scam, the fake wallet managed to steal millions of dollars in BTG and BTC.

As a precautionary measure (and to avoid hassle), most large exchanges do not support the trading of most of these newly-forked coins. This may be the reason that the new B2X tokens are listed on so few platforms.

However, despite the fact that the market is starting to become savvy to the scams surrounding these new coins, there are more forks on their way. Bitcoin Cash Plus is on its way in early January, Bitcoin Atom trailing closely behind it.

As the world of cryptocurrency moves further into the mainstream world of financial technology and popular culture, things seem to get weirder and weirder as they become more profitable. Crypto scams are being born left and right, and will continue to be for some time. Keep your ears sharp, your eyes peeled, and be smart.

Decentralized news from the zoo so believe nothing of what you hear, and only half of what you see