According to the latest financial report from SBI Holdings, the company plans to enter further into the world of blockchain to establish a “new financial ecosystem based on cryptocurrency”.

SBI Holdings is the largest division of SBI (Strategic Business Innovators) Group, a Japan-based financial services syndicate. So far, the company has its sights set mainly on Bitcoin, Bitcoin Cash, and Ripple, but more could be added to the roster as SBI’s plans continue to develop.  SBI CEO Yoshitaka Kitao said that SBI’s plans of action include the establishment of a “dominant cryptocurrency exchange platform, among other platforms.”

Among the goals that SBI has set for itself to integrate into the world of crypto, there are several that indicate that SBI intends to nourish practices that would make the cryptocurrency markets a less volatile place. In its financial report, SBI expressed that it wants to contribute to “the creation of a sound market structure”, and establish a “means of cryptocurrency utilization that satisfies actual demand, to stabilize its volatility.” More specifically, SBI plans to use crypto for “remittance, trade finance, and payments.”

Additionally, SBI aims to provide “new trading opportunities in cryptocurrency for institutional investors”, a practice that it also hopes will contribute to market stabilization. The appearance of large cryptocurrency hedge funds and other crypto investment services from companies like MetaStable and Polychain is still quite new, even for the ever-changing crypto landscape. Investment opportunities from SBI would undoubtedly catch the attention of some major players.

The cryptocurrency landscape has been one of the most dynamic in 2017. The state of the industry as well as the impact of cryptos on all elements of the financial services industry will be discussed at the 2017 Finance Magnates London Summit this November. 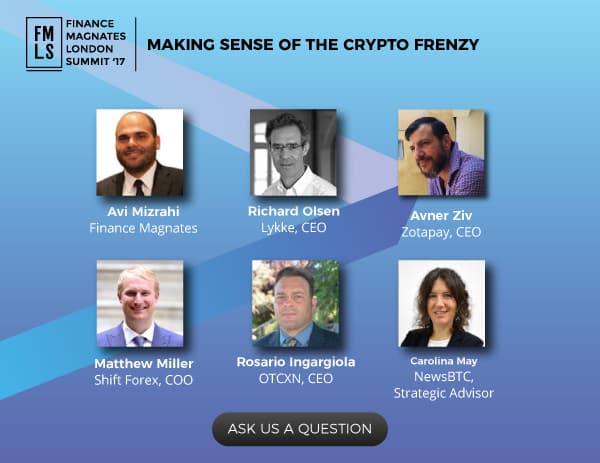 SBI is also working to integrate itself deeply into the business of cryptocurrency mining, an activity that it says is “unevenly distributed in China”. The mining effort is an integral step in its plans to gain a foothold in the crypto world.

According to SBI, the current uneven distribution of mining leaves the market vulnerable to manipulation by major shareholders: “5 out of 6 top Bitcoin mining pools are China-based, and the share totals over 60%.”  SBI believes that the lopsided Bitcoin mining industry could even lead to something as severe as a 51% attack. By taking up more space in the business of crypto mining, SBI is attempting to strengthen the market’s base.

Exactly when all of SBI’s plans will be put into action has not yet been specifically announced.  As far as the exchange platform, SBI is “currently waiting for the appropriate timing to start the [exchange] service, where the key decision factors are the progress of SBI Crypto’s mining, along with the division situation of [the upcoming] hard fork.”

It appears that some of SBI’s plans are already underway. In September of this year, SBI announced a collaboration with Ripple to institute a money transfer system between banks in Japan and South Korea using Ripple’s distributed ledger technology.