Over the past 24 hours, the price of Bitcoin plummeted from around $6,350 to roughly $5,550, the lowest price that it has seen so far this year. Bitcoin’s total market cap dropped below the $100 billion benchmark, a low that hasn’t been reached since November of 2017.

The cryptocurrency markets as a whole sank from $210 billion to as low as $180 billion on Wednesday. The total market cap hasn’t dipped that low since the end of October 2017. At press time, the markets had slightly recovered to $185 billion.

As such, BTC isn’t the only coin to suffer–a number of major cryptocurrencies have fallen alongside it. XRP, ETH, and BCH have all seen dips of over 10 percent.

A number of analysts are pointing the finger at Bitcoin Cash. The BCH network is on the brink of a controversial hard fork, one that self-proclaimed Bitcoin inventor Craig Wright is gunning for. Roger Ver and Bitcoin ABC, the group of software developers originally responsible for the creation of Bitcoin Cash, are dead-set against this fork.

However, it seems that the self-titled Satoshi and his cohort may win this one. Data collected by CoinDance shows that 70 percent of Bitcoin Cash miners are showing support for the fork.

(A hard fork is a software upgrade that causes a cryptocurrency network to split in two, which also creates an entirely new cryptocurrency. Ironically, Bitcoin Cash itself was created through another controversial hard fork of the Bitcoin Network.)

The Sydney Morning Herald reported that like cryptocurrency market caps, the battle between those who support the fork and those who do not have reached a new low – name-calling and hostile emails have ensued.

Roger Ver admits that he may have been fooled by CSW.
Screenshot below is the email CSW send to Roger.
If you want to watch the video: https://t.co/PwDGtEbltV
First 2 minutes are mildly entertaining. pic.twitter.com/m4K5HmFXlP

The contention is certainly not without reason. Since it seems likely that the fork will happen, the Bitcoin Cash network will indeed be split into two coins–two coins that many analysts predict will be weaker than the BCH network is now. 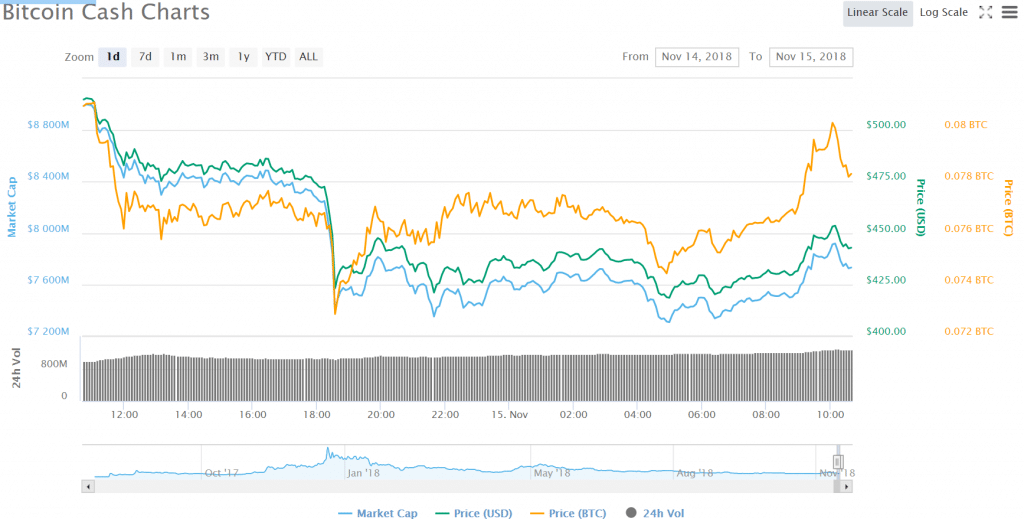 The fear and contention around the future of the BCH network seem to be driving cryptocurrency networks down. However, not everyone believes that the damage is permanent. BKCM’s Brian Kelly told CNBC that the death-drop is likely a “very short-term” event, adding that “I think it’s probably an opportunity.

“In fact, we did some buying at my fund today [Wednesday],” he said.

Kelly also said that this “opportunity” might not be for everyone. “If you don’t understand what a ‘hard fork’ is, do not jump into that pool right now. It is the deep end.”