As the bear market continues to bite down on the cryptocurrency industry, nearly every corner of the market has been affected. Some reports have revealed that the vast majority of ICO-backed companies are worth a fraction of their original valuations; there’s even some evidence to suggest that cryptocurrency exchanges are losing users en masse.

While the rest of the industry is suffering, there is one part of the cryptosphere that has managed to thrive through the disaster–cryptocurrency lending companies.

Crypto Lending Companies Profit From Both The Optimists and the Pessimists

According to a recent report by Bloomberg, crypto lending companies have gotten a major boost in business from several sources. Customers who need cash, but don’t want to sell their coins when valuations are down, as well as investors who are interested in short-selling.

In other words, the companies are benefitting from customers on both sides of the crypto market crash: those who are trying to hold onto their coins for the long run, and those who are betting that prices will continue to fall.

Bloomberg’s report named three companies specifically. Aave’s ETHLend, which just opened an office and plans to expand into the US in the near future; Salt Lending is adding to its team of more than 80 employees every month as revenues continue to grow. BlockFi reported 100 percent growth in revenues and customer base since June when it received a $52.5 million investment from Mike Novogratz’ crypto merchant bank Galaxy Digital.

BlockFi is excited to announce that we have raised an additional $4 million in convertible debt investments. https://t.co/GgD8ZnxZ3U pic.twitter.com/zhAoWtZkNA

Indeed, the business of short-selling seems to have fueled most of the recent growth of the crypto lending industry. In fact, some crypto lending companies appear to be doing even better since the market downturn than when crypto prices were bullish.

We are excited to present the first Digital Asset Lending Snapshot that highlights key trends and metrics since our launch.https://t.co/cIkfwCx4Lu $BTC $ETH #Lending #Borrowing

“We’ve been profitable from day one,” he said. “We’ve certainly proven that there is market demand, that there’s product fit and that it’s time to invest even more in this side of the business.”

Genesis reportedly processed $550 million during its first six months. Moro said more recently that this figure has now risen to $700 million, and that the company currently has about $140 million in outstanding loans, each lasting about six weeks.

While retail investors make up a good portion of the customers who make use of these lending companies, “the main users of crypto-lending services are blockchain companies that use the funds for access to working capital; trading companies and hedge funds that borrow for short selling, arbitrage opportunities and price neutrality,” said Dr. Mervyn G. Maistry, CEO & Founder of Konfidio and Kintaro Capital, in an email to Finance Magnates.

Phil Zamani, CEO of AERGO and CEO of the board at Blocko, told Finance Magnates that the crypto lending companies that have done the best are “crypto-collateralized lending companies who don’t simply act as the middleman but actually loan the funds out themselves.”

#ETHLend on @Bloomberg ‼️
“Everything flies in the bull market, but true magic happens when it does well in a bear market,” said Aave CEO @StaniKulechov said in a phone interview.
Read more about Stani’s interview here ⬇️https://t.co/ZTNBh2V3Ab#DeFi #Lend

“Most lending companies simply ‘execute’ the transactions,” he explained. For these companies, several additional logistical factors drive profits down. “In their cases, they not only have smaller margins than those acting as their own banks, but they also have trouble finding loan suppliers as well as retaining those suppliers.”

For most crypto companies, however, the bottom line is the business model. Maistry explained that “the crypto lending process is faster than traditional methods and successful players have managed to exploit this competitive advantage.”

Additionally, the technology that these platforms provides a competitive edge in terms of the trustworthiness and transparency of many of these platforms: “thanks to the underlying blockchain technology, lending platforms are also able to provide increased security, compliance, and dispute mechanisms to further build credibility and trust,” Maistry said.

“The process of lending is made as simple and possible, especially for those people who have digital assets as collateral and are looking for extra funds at a quicker pace than from traditional creditors.”

If crypto lending companies are doing so well in the bear market, how could upward shifts in the market affect the profitability of these companies?

Some think that the answer is yes. “This profitability will increase for all lending companies” if valuations increase, Zamani explained.

“The higher the price of crypto assets becomes, the more demand there will be for people to take a loan collateralizing their crypto rather than selling it directly to fiat. This is because a bullish trend makes people want to ‘hold’ their crypto, but when they need liquidity they go for a loan.” Thus, crypto-collateralized lending companies will likely get a wave of new customers. 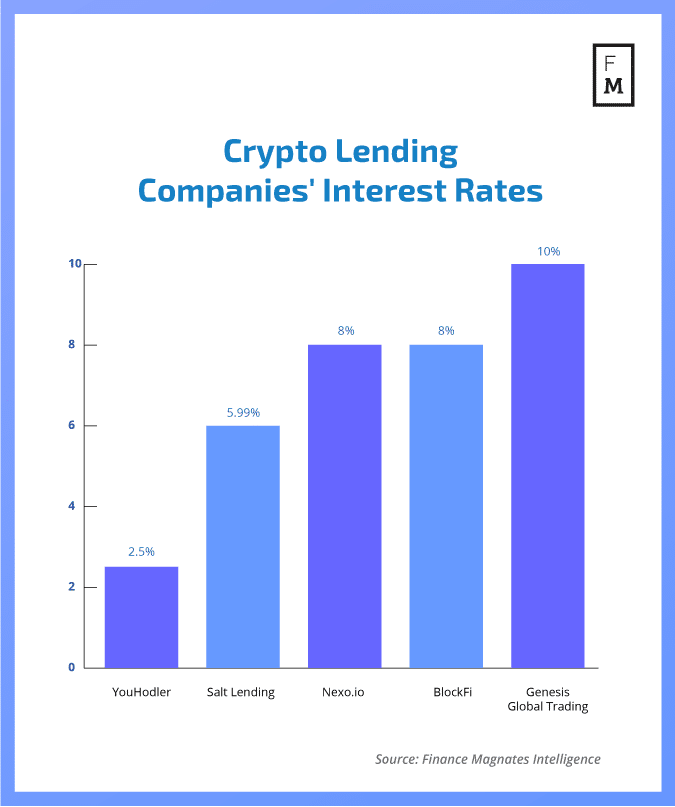 Maistry sees the growth of crypto lending companies as a force that will, in turn, continue to fuel the growth of a possible bull market. “More stable cryptocurrency markets will drive more active digital asset lending, which in turn will attract more players into the space,” he explained. “This will boost crypto asset prices and their value.”

According to Zamani, this will cause the formation of a positive feedback loop. “As a result, the growth of the potential user base will drive further growth in cryptocurrency lending and borrowing services,” he said.

However, not everyone believes that a bull market would be the best thing for crypto lending companies. “As the market recovers, fewer holders of tokens will want to borrow against the assets, lowering demand for lenders and forcing them to increase the incentive for people to lend, thus decreasing profitability,” said Kyle Asman, a partner at BX3 Capital, to Finance Magnates.

How Can Investors Profit From Crypto Lending Companies?

Taking a loan out from a crypto lending company is not necessarily a profitable act in and of itself–customers have to hope that their assumptions about the future of the cryptocurrency market are correct.

However, there is a slightly safer way that crypto hodlers can make a profit from crypto loan companies. Kyle Asman suggested that crypto holders could lend their own coins through a platform and earn interest when they are loaned out. “The best way for investors to see profit is to lend their cryptos, and make interest,” he said, although “the majority of lenders do not offer direct investments.” He named Celsius as an exception.

Maistry echoed Asman’s suggestion, adding that “we recommend an in-depth analysis of each platform itself to lower investor risks.”

Some loan platforms also have their own coins that investors can buy and hold–Nexo.io’s NEX token or Salt Lending’s SALT, for example.

Meanwhile, the rest of the crypto industry continues to suffer. Bitmain announced a round of layoffs several weeks ago, with many more rumored to come. Huobi has also made plans to shrink its operations.