In the final quarter of 2017, the ICO market boomed to unprecedented heights. What had started as an off-the-wall, multi-thousand dollar fundraising option had transformed into a multi-billion dollar industry with a growing number of high-volume institutional investors.

Now, a year after the ICO craze began, the fruits of the industry are starting to be borne–and it seems like the hype was, well, a little unsubstantiated (or perhaps, a lot unsubstantiated.)

Late last month, a new report by Diar.co revealed that roughly 70 percent of ICOs are currently worth less now than when they were originally released.

Citing statistics collected by TokenData, “Diar number crunching shows that 70% of tokens are now valued at less than what was raised during their ICO,” the report said. “And with tokens having no equity representation, markets have shrugged off cash-on-hand as part of an enterprise valuation,” the report said. TokenData founder Ricky Tan told Diar that recovery was unlikely anytime soon.

Citing a smaller sample size, a report by global professional services firm Ernst & Young suggested that this figure may be even higher–a whopping 86 percent of the 110 ICOs that accounted for nearly 90 percent of funds raised last year had shrunken valuations.

1/ This week @DiarNewsletter takes a look at #cryptocurrency tokens, and mainly, how ICOs now fair after nearly 1000 projects raise $20Bn. For starters, 7 out of 10 ICOs are now valued at under what they raised within the last 20 months. https://t.co/58J2A2hGAe

The report also pointed out that 402 out of 564 projects that collectively raised $8.2 billion are now worth just $2.2 billion. “An eye watering $6Bn loss in market capitalization value against actual cash paid out to development teams,” the report remarked.

Additionally, a number of tokens that completed their funding rounds in late 2017 and early 2018 are nowhere to be found. “324 tokens, over a third of tokens that completed an ICO and that raised over $2.3Bn in 2017-18 have yet to have their token listed on any exchanges,” the report explained. “Half of these projects have completed their funding rounds in 2017. And 44 tokens that have raised $1Bn sit on the bottom of the table due to practically zero liquidity, and no information about distribution of token supply.”

Diar’s report wasn’t all bad news–the report also highlighted projects that had successfully used their funds to maintain and grow the value of their projects. Cardano, NEO, TRON, IOTA, and Tezos were all mentioned.

Still, most blockchain and crypto projects have some serious ‘splainin to do. So–what’s going on? Have these companies squandered their funds, or is this dip in valuation par for the course?

Where Did All the Money Go?

Some of the loss can be attributed to the fact that the cryptocurrency markets themselves have lost so much of their value over the past year. “Many of those companies received investment in other cryptocurrencies such as ETH, which they held onto (in many cases because they did not have banking facilities or liquidity available to convert the crypto info fiat),” explained Dr. Edgar Radjabli, Managing Partner of investment managing firm Apis Capital Management. 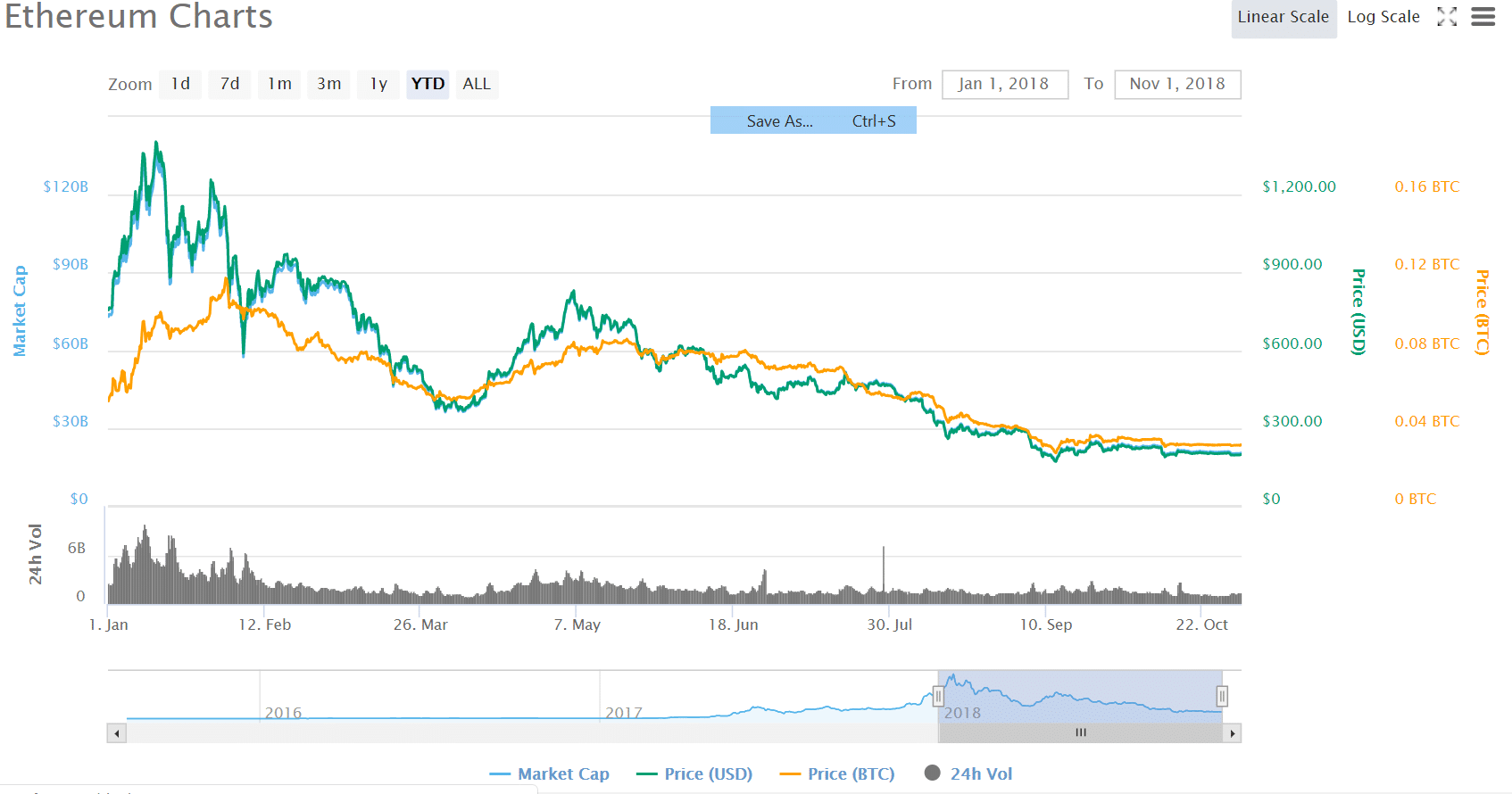 “Since the value of all cryptos declined nearly 90%, they simply lost the majority of their raised funds to the volatility of the market,” he explained, adding that a large portion of the funds raised may have gone toward hiring top-tier talent.

However, not everyone is willing to give these ICO-backed companies the benefit of the doubt. Ben Ames, Director of Growth at Corl, told Finance Magnates that “often, the people behind ICOs were not capable of leading projects and shouldn’t have been funding in the first place.”

“The Are Unlucky Investors Who Will Never See That Money Again”

“With growing involvement from regulators like the SEC, many projects have been put in place and the money returned to investors. Unfortunately, there are unlucky investors who will never see that money again,” he continued.

His sentiments echoed those of Jim Preissler, CEO of Trade.io. In an interview with Finance Magnates conducted earlier this year, Preissler explained that the nascent nature of the blockchain and crypto industry meant that the founders of many blockchain and crypto startups had no practical experience in the corporate world. “after the ICO, you have to build a company and a product, which is the next big hurdle where you see a tremendous amount of failure, not surprisingly,” he said.

“A lot of this has to do with [the fact] that you have teams that have never done this before–for two guys with only a couple years of corporate experience, to build a business, build a team, build a company, build a product–it’s not easy.”

Jim also added that the high rate of failure in ICO projects is analogous to the failure rate in the world of traditional startups. “When all is said and done, the reality that you’re going to see is that 80 to 95 percent of all ICOs fail, which is not that dissimilar from the VC world–you see most startups fail as well,” he explained.

David Siemer, CEO of Genesis, also pointed out a correlation between ICO-backed startups and the VC world to Finance Magnates. “Common knowledge in the traditional VC market that companies tend to be relatively more inefficient when you massively overfund them and we’re definitely seeing a lot of that in the crypto space.”

“Anecdotally, seen a lot of rich companies with very small teams throwing money at everything. From a strategy perspective, they are looking at a 1-year time horizon when they should be planning for a 5-year marathon,” he added. He also explained that many of the projects that hit their fundraising goals during the ICO craze “would never be able to raise money in the traditional markets.”

Par For the Course?

Siemer may be right–indeed, many analysts have explained the general decline in the cryptocurrency markets as a natural (if vicious) maturation of an over-inflated market.

In fact, Ethereum creator Vitalik Buterin himself predicted this “cooling” of the ICO market more than a year ago. “We are in a bubble because all the cryptocurrencies are rising and people have a feeling that they will always continue to rise,” he said to Israeli financial newspaper TheMarker just under a year ago. “In the end the market will need to cool down….A lot of projects will fail and people will lose money.”

There is also some statistical evidence to suggest that the general loss in valuation is all a part of a greater cycle. In the August “Hype Cycle for Emerging Technologies” report published by Gartner, a Connecticut-based research firm, blockchain was said to be entering the “trough of disillusionment phase,” when interest–and capital–hits new lows.

If the Gartner cycle is correct, however, the blockchain and crypto markets will soon be entering into the “slope of Enlightenment,” followed by the “Plateau of Productivity.” In other words, market participants will establish sound ways to conduct business, which will lead to a more stable, secure industry.

“The Market Ran Out of Fools”

Indeed, many see the dip in the ICO market as a sort of return to rationality. “Valuations came back to earth,” Siemer said. “Overall a signal of the market maturing and the correction has been in my opinion healthy.”

“What we saw in 2017 was crazy, wild valuations ($200M fully diluted) for a project with two guys and a white paper,” he continued. “Lot of insanity that wasn’t sustainability – should not have been a surprise that the market has corrected.”

“Last year the main driver of prices/valuations was dictated by FOMO, social signaling, etc. vs. actual utility and value delivered to users. The original model was that people invest early at deep discounts and then pass the buck to retail investors – basically the greater fool theory and the market ran out of fools.”