Chances are that if you’re reading this, you already know that the cryptocurrency markets have changed quite a bit over the past year.

Market caps are way down. And the exchanges that founded themselves before or during the cryptocurrency boom are facing a challenging landscape ahead, one that will undoubtedly be marked by higher competition for an increasingly lean, mean, and more educated consumer base.

When looking at the upcoming year, what are the actual threats that cryptocurrency exchanges face? And what’s irrelevant?

One Report Claims that Only the Top 4 Cryptocurrency Exchanges Have Over 100,000 Active
Users

In November, the Blockchain Transparency Institute (BTI) published a set of data that revealed that only four cryptocurrency exchanges had over 100,000 active users. For the purpose of the report, “active users” were defined as the average number of users that logged onto a crypto trading platform per day.

Our new rankings list is out with mobile app and API trading metrics! @binance remains at the top while @Bitstamp, @coinbase and @krakenfx move up 33, 19 and 23 spots respectively from CMC’s ranking into the Top 10. See the full list https://t.co/6kEOmoBYOw pic.twitter.com/62iWvD1swI

Are the report’s findings suggestive of a decline in users that could lead to eventual bankruptcy in some exchanges? Perhaps. However, this piece of information cannot be viewed in a vacuum. Before coming to the conclusion that all cryptocurrency exchanges are doomed, let’s assess what the data means, and what the real risks may be.

For one thing, it’s important to note that a higher number of users does not necessarily correlate to a higher trading volume. The report also found that the transaction volume per user on Coinbase ($371) was just a fraction of the average transaction volume on, for example, Bitfinex ($2,841). 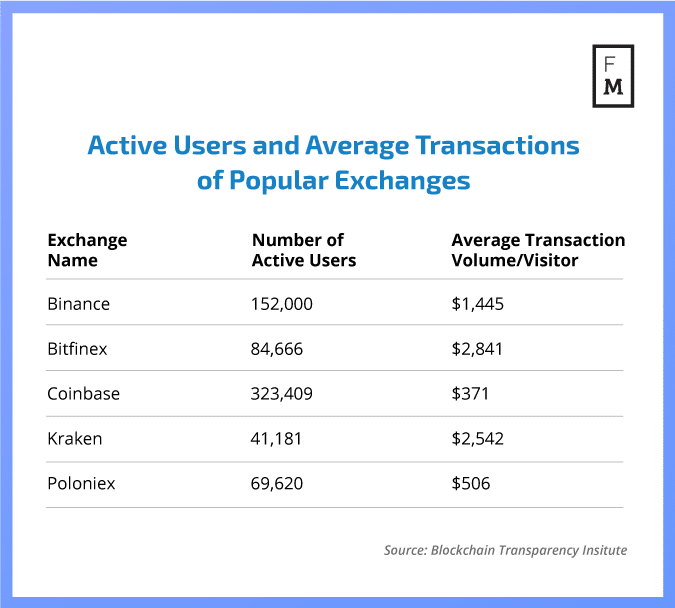 What this may suggest is that different cryptocurrency exchanges are more commonly used for different purposes and that as time progresses, each of them may continue to become further embedded in its own ‘niche.’ Exchanges like Coinbase for small, everyday trades and transactions, and exchanges like Binance for more serious, high-volume trades.

Regardless if an exchange has higher numbers in terms of users or overall transaction volume, what might the future be of exchanges that are leading the market–and those who are not?

Evan Feng, Founder & CIO of Tapestry Capital, sees a future in which cryptocurrency exchanges eventually consolidate. “The large ones will get larger while smaller ones will go out of business,” he wrote in an email to Finance Magnates. “It’s a natural result of these markets getting more efficient.”

However, Feng believes that consolidation trends are more likely to form along border lines than trading trends. “We’ll probably start seeing consolidation across geographies once regulatory landscapes are more certain (e.g. 1 pan-EU exchange will be most trusted, same for Asia etc. vs. Vietnam and Thailand),” he explained.

Indeed, this could be the case if some regulatory trends continue to take hold. Regulators in many countries are cracking down on users of exchanges (and exchanges themselves) in order to ensure that risk is low and that taxes are being paid.

One of these countries, incidentally, is the United States. Recently, US-based cryptocurrency exchange Kraken revealed in a tweet that it had received 300% more subpoenas in 2018 than in 2017, adding that “You can see why many businesses choose to block US users.”

Kraken went on to say that the “cost of handling subpoenas (regardless of licenses) is quickly becoming a barrier to entry.” If what Kraken says is true, trends that have already begun forming along national borders are only continuing to deepen, at least for the United States.

Peek at our Compliance team’s 2018 Transparency Report. You can see why many businesses choose to block US users. Cost of handling subpoenas (regardless of licenses) is quickly becoming a barrier to entry. Inquiries up 3x YoY. pic.twitter.com/YbyLEqhOUf

Additionally, reports emerged earlier this week that regulators in both Denmark and Bulgaria are cracking down on cryptocurrency exchanges and their users.

Denmark’s story contains particularly important elements of how regulation may affect future consolidation trends–Denmark’s tax agency was tipped off by Finland’s tax agency that some of its citizens had been using a Finnish exchange to trade crypto. As a result, the agency demanded that three of its domestic cryptocurrency exchanges hand over the trading data of their users so that it could ensure that users are correctly paying their taxes.

In this respect, it’s more likely that tax agencies like Denmark’s will take measures to limit their jurisdiction’s access to foreign crypto exchanges that they could be using to evade paying taxes. In other words, countries could attempt to ban their residents from using foreign exchanges. This kind of a scenario could further support consolidation across national and continental lines.

Further, in this kind of scenario–one where regulators dominate the market–countries with policies that are particularly hostile toward cryptocurrencies could eventually regulate domestic cryptocurrency exchanges out of business. While most governments have shown either indifference or some level of support to the development of the cryptocurrency industry, there have been cases in which governments shut down–or very nearly shut down–their country’s domestic exchanges.

Therefore, consolidation is likely only an existential threat to cryptocurrency exchanges if governments are either hostile or extremely negligent. But, hey, it’s happened before.

Decentralized Exchanges: The Disruption that Wasn’t (Yet)

Decentralized exchanges are the wave of the future. They can never be shut down by governments or any regulatory agency.

However, DEXs are–of course–decentralized. Like the Bitcoin network, they are not technically based in any one legal jurisdiction. Additionally, they do not require their users to submit identity information along with their transactions. Therefore, DEXs could see quite a bit of growth in terms of their numbers of users if regulations continue to tighten on centralized exchanges.

The crypto exchanges have become the thing that we have originally fought against. Their power is immense. Hitbtc, for example, has increased suffering for millions of poor people who cannot afford the minimum buy-in since it is greater than their monthly income. Boycott them.

Still, this moment is still far in the future, and the future impact of DEXs on the market is unknown. “It’s still unclear what the impact of [decentralized] exchanges will be,” Feng said. “My base assumption is that they remain a niche product, but if someone figures out a way to structure smart-contracts safely, they may become even more used than the comparatively centralized exchanges.”

Ease-of-Use and Relevance Cannot Be Underestimated

The entire cryptocurrency industry started as something that was really only accessible to a class of people we’ll call the “very tech-savvy”–some early cryptocurrency exchanges were so technical that they required their users to input lines of code.

Obviously, things have come quite a long way since then–but perhaps they haven’t come far enough for some exchanges.

Indeed, David Siemer, CEO of Wave Financial, told Finance Magnates that “low-tech, long-only exchanges with long-tail coins (i.e. 178th ranked coin on CoinMarketCap)” are the most likely to go under first. “No one is interested in buying those,” he said.

He also noted that even these kinds of exchanges were far more profitable in the past: “there was a great moment in time that exchanges were getting high listing fees, but that reality is now gone. That was the revenue model for many smaller exchanges, when in reality there were just a bunch of wash trades that the exchanges faked themselves.”

Siemer says that the exchanges he sees doing the best are those “that cater to institutional traders and offer additional sophisticated trading tools are doing well. They’re not making the same money they were making in January, but they are still doing okay.”

“Most people that are trading in crypto are only playing with the top crypto assets,” he continued. “There’s been a consolidation towards ‘safer,’ larger cap assets (i.e. BTC) – no one is betting on the long tail, so trading fees on altcoins and new token listing revenues are down.”

While none of these threats to centralized exchanges may seem powerful enough in and of themselves to be matters of concern, it’s important to remember (and, frankly, impossible to ignore) the fact that the bear market that has plagued the cryptocurrency industry for the past year is putting quite a bit of pressure on centralized cryptocurrency exchanges.