At press time, it certainly seems as though the latter may be true. Within the last 24 hours, Bitcoin had fallen more than three percent, seemingly on the way down from its latest move over $24,000. 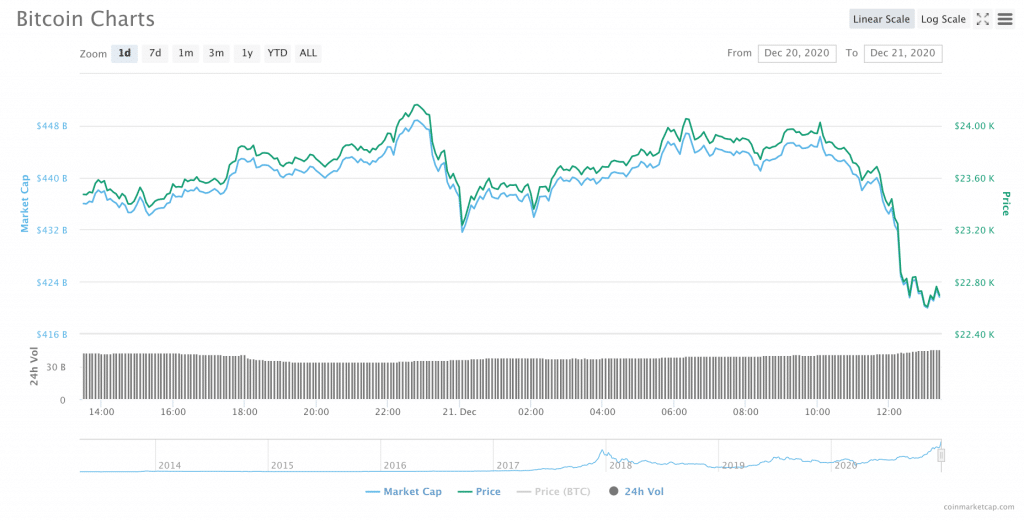 Could the correction move further? It’s certainly possible. After all, with such explosive price growth in BTC, corrections are almost a certainty.

”Bitcoin Is My Safe Word”

However, Bitcoin could still have a ways to go on its upward journey before a meaningful correction takes place, and it could have a lot to do with Tesla Founder, Elon Musk.

“Bitcoin is my safe word,” Musk tweeted on Sunday.

Bitcoin is my safe word

The same day, Reuters reported that in a Twitter exchange, Musk spoke with Michael Saylor, Chief Executive Officer of MicroStrategy, about the possibility of converting ‘large transactions’ of Tesla’s balance sheet into Bitcoin. MicroStrategy recently announced that it had invested a total of $1.1 billion into Bitcoin.

“If you want to do your shareholders a $100 billion favor, convert the $TSLA balance sheet from USD to #BTC,” Saylor tweeted to Musk. “Other firms on the S&P 500 would follow your lead & in time it would grow to become a $1 trillion favor.”

“Are such large transactions even possible?” Musk replied to Saylor.

“Yes. I have purchased over $1.3 billion in #BTC in past months & would be happy to share my playbook with you offline….,” Saylor replied.

However, Musk later seemed to let on that he was not serious about his interest in Bitcoin. Several hours after the original ‘safe word’ tweet, Musk tweeted, “just Kidding, who needs a safe word anyway.”

After his conversation with Saylor, Finance Magnates reported that Musk went on to criticize BTC and said that it was “almost as bs as fiat money.” Previously, in 2019, Musk shut down rumors about Tesla getting involved in Bitcoin.

“Elon Is Singlehandedly Going to Send Bitcoin to $25k.”

Even though Musk was apparently joking about any serious interest in Bitcoin, Crypto Twitter has been abuzz with the possibility of Tesla buying into BTC: “The internet will break if Elon Musk converts any of Tesla’s balance sheet into Bitcoin,” Tweeted investor and renowned Bitcoin advocate Anthony Pompliano. He later added that “there is 5% chance of it happening as of now.”

The internet will break if Elon Musk converts any of Tesla’s balance sheet into Bitcoin.

One of the Co-owners fo Arbitrage Ops, who operates on Twitter as @CryptoCharles_, wrote that “Elon is singlehandedly going to send Bitcoin to $25k lmao.”

Elon is singlehandedly going to send Bitcoin to $25k lmao

Peter Schiff, renowned Bitcoin bear and Chief Executive of EuroPac bank, wrote on Twitter that “it seems like @elonmusk was only joking about exposing Tesla shareholders to Bitcoin. So I don’t need to convince the board not to turn Tesla into a double bubble.”

It seems like @elonmusk was only joking about exposing Tesla shareholders to Bitcoin. So I don't need to convince the board not to turn Tesla into a double bubble. But I'm still willing to debate @michael_saylor on #Bitcoin verse #gold. Perhaps @joerogan is willing to moderate.

With or without Elon Musk, though, many believe that Bitcoin is on its way up.

Zac Prince, Chief Executive of crypto lending company, BlockFi, recently told Finance Magnates that he foresees Bitcoin headed somewhere between “$50K and $100K” by the end of 2021. Additionally, he predicted that it will be less than six months before Bitcoin reaches above $25,000.

Still, Prince believes that BTC’s path forward may not be without its obstacles, specifically pointing to the possibility of “overbearing regulation from major world governments” could reverse the course of Bitcoin’s current bull cycle.

And a wave of regulation could be headed straight for BTC and other cryptocurrencies: earlier today, Finance Magnates reported that the US Financial Crimes Enforcement Network (FinCEN) proposed a rule that would require users of centralized cryptocurrency exchanges to provide personal information about the owner of digital wallets connected to their trading accounts.

Moreover, there are other factors to consider, including Bitcoin’s usability. Alex Mashinsky, who believes that BTC will end 2021 somewhere between $30K and $40K, told Finance Magnates that Bitcoin’s growth can only be sustained if it is backed by mass adoption.

“We need mass adoption for sustainable growth in crypto, which means at least 500 million new users who come for store of value and yield,” he told Finance Magnates.

If that can happen, then anything is possible: when asked what BTC’s price outlook for 2025 is, Mashinsky said that while “it is hard to predict,” Bitcoin “should be over $200k by then.”