This past Friday, Chinese Presiden Xi Jinping came out in support of blockchain technology during a meeting of the Political Bureau of the Chinese Communist party’s Central Committee. Specifically, Jinping called for his country to adopt blockchain technology “as an important breakthrough for independent innovation of core technologies.”

He also said that China would be investing in the development of blockchain technology.

1/ No doubt that blockchain is intensively reported on national TV channels, on covers/headlines of national newspapers and websites. pic.twitter.com/qXVSjR5Tho

So, when Bitcoin began to rally over the weekend–briefly peaking over $10,000–a number of analysts were quick to connect the dots: after all, the Chinese president’s support of blockchain is certainly a good sign for Bitcoin, right?

Perhaps–but, as a data scientist and creator of UsefulTulips.com Matt Ahlborg said several weeks ago regarding connections between Hong Kong protests and a BTC price bump, “be mindful of narrative pushers on every side of Bitcoin, including myself.”

[5/6] So there you have it. As most people with a brain know, a single week of volume from a single source isn’t enough to conclude anything. Be mindful of narrative pushers on every side of Bitcoin, including myself…

Indeed, saying that Xi Jinping’s comments on blockchain were the cause of Bitcoin’s rise is certainly an easy connection to make–but what are the facts?

Here’s what we know: a look at the data

There certainly does seem to be a strong correlation between the timing of the reporting on Xi’s comments and Bitcoin’s upward journey. 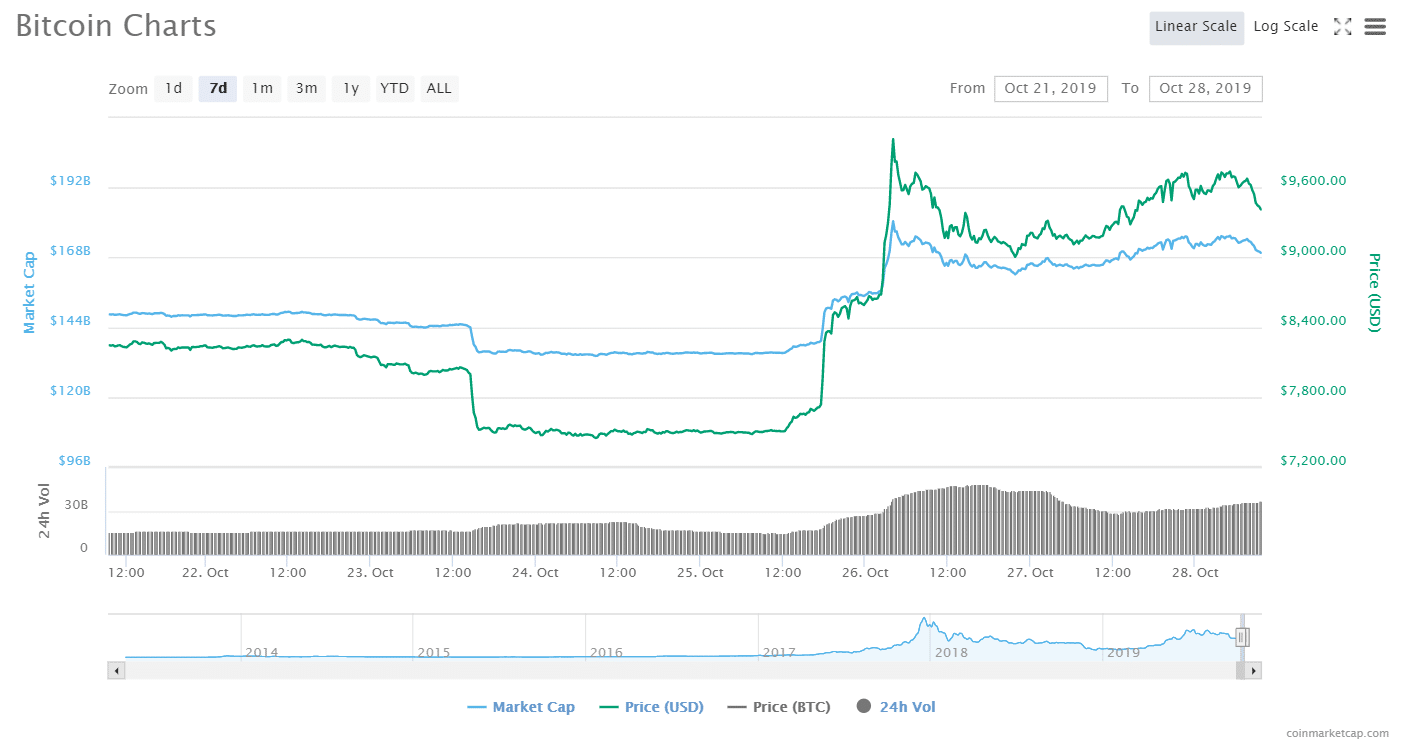 Additionally, well-known industry analyst and Primitive Crypto founder Dovey Wan tweeted that on search engine Baidu, “where most newbies actively search for stuff they come to know for the first time,” there was a massive spike in the search terms “Blockchain” and “Bitcoin” following Xi’s speech.

Specifically, Wan said that there was a “whopping over 1300% increase in Blockchain search on 25th, surpass[ing] Bitcoin.”

Wan also pointed out rises in the search terms “blockchain” and “Bitcoin” on WeChat’s search index following the news, noting that “Bitcoin query also dipped/stayed flat on 25th as Wechat, and jumped back up on 26th.”

2/ Wechat, where most industry ppl came to know abt it the first hand (most of white-collar usually don’t watch CCP news) see a significant spike in Blockchain right on 25th, Bitcoin dipped a little (-5%); Bitcoin spiked on 26th, which I suspect a lagging indicator to the price pic.twitter.com/fMtHjdntBx

Do investors know the difference between Bitcoin and blockchain…?

However, as analyst Kyle Torpey wrote in a piece for LongHash that “the connection between Xi’s remarks and the Bitcoin price is somewhat unclear, as the president’s comments don’t have much to do with Bitcoin’s key value proposition as an apolitical, uncontrollable digital money.”

In other words, the fact that Xi is a fan of blockchain is great–but it really doesn’t have anything to do with Bitcoin. In fact, China’s official policy has been famously anti-crypto since the fourth quarter of 2017, when the country instituted a sweeping set of bans that outlawed ICOs, banned domestic cryptocurrency exchanges, and blocked internet access to cryptocurrency exchanges.

Therefore, Torpey pointed out that if Xi’s remarks did indeed cause the spike, that investors may not really know the difference between Bitcoin and blockchain.

Indeed, even though “China continues to go down the road of ‘blockchain not Bitcoin’…the price jump shows [that] investors don’t seem able to differentiate between the two,” Torpey wrote.

“It’s pretty funny that Bitcoin is up on Xi Jinping saying nice things about blockchain.”

Seeming to come to a similar conclusion regarding the apparent confusion between Bitcoin and blockchain, Gady Epstein, The Economist’s China Affairs Editor, tweeted that “it’s pretty funny that Bitcoin is up on Xi Jinping saying nice things about blockchain.”

And indeed, even though China is currently working on producing a national cryptocurrency of its own, this is not a positive sign for Bitcoin or for the cryptocurrency industry: “this will only increase government’s control of our money. Now it will be easier for them to tax you or track where you move your money, not to mention them keeping their ability to ‘print money,’” said Canadian anarcho-capitalist and entrepreneur Jeff Berwick in an interview with Finance Magnates conducted earlier this year.

If anything, Bitcoin stands in direct opposition to what China may be trying to accomplish with its adoption of blockchain technology: “Bitcoin has changed quite a bit over the last few years and it’s been regulated,” Berwick said. “However, it still is a currency totally outside of the control of central banks or governments. That truly is a libertarian dream.”

However, the fact that practically each and every China-based blockchain firm saw a rise in its stock value following Xi’s speech seems to indicate that there are at least some investors who do seem to know the difference.

“Chinese investors snapped up every blockchain-related stock in sight after President Xi Jinping said Beijing wants to speed up development of the technology,” says a report from Bloomberg published on October 28th.

“The market reaction shows how far an endorsement from Xi can go in China, where high-level officials on Monday began their first major policy meeting since early 2018,” the piece said, also pointing to the fact that “[the] Shenzhen tech index surge[d] 5.3%, the most in eight months.”

cnLedger, a popular Twitter account that shares news about the blockchain and cryptocurrency industry in China, also reported that “Xunlei, a company selling cloud downloading services and claimed heavily invested in blockchain, just doubled its stock marketcap over the night. (sic)”

Additionally, Dovey Wan pointed out that it’s difficult to isolate Bitcoin from the rest of the blockchain industry: “the Blockchain shill from Xi definitely helps Bitcoin awareness as well, the two concepts are interrelated, hard to isolate one from each other,” she wrote on Twitter.

In her opinion, “we can also see that the news didn’t pump Bitcoin instantly (both materially and mentally) on 25th, it’s more as a aftermath. (sic)”

Indeed, “this Xi Shill is definitely bullish for the whole industry, especially as the highest level of recognition from CCP, when previously “blockchain/bitcoin is a scam” is the leading narrative among average Chinese ppl,” she wrote, adding that “’China FUD’ in the west can also shut up to some extent,” referring to western holders’ tendency to blame bad news in China for fluctuations in Bitcoin’s price.

Wan also pointed out that the “China Merchant Bank just announced invested in BitPie, the Bitcoin wallet with [the] longest history and most users back in China.”

“All I can say is this to me it’s a sign of beginning of the nationalization of Bitcoin/Cryptocurrency related infra in mainland, (sic)” she wrote. “Eventually, all things can be state-owned, or at least partially (mining, ASIC, exchanges, wallets, etc etc).”

Eventually, all things can be state-owned, or at least partially (mining, ASIC, exchanges, wallets, etc etc)

And the Chinese government has made some nods toward Bitcoin bullishness in the past. Earlier this year, Samson Mow, CEO of Pixelmatic, pointed out on Twitter that the Bank of China posted an educational piece on Bitcoin.

Yesterday the #BankofChina posted up an article about #Bitcoin. They explained how $BTC works, why the price is going up, and why it’s valuable. Never thought I’d see that happen. 😅 #Bullish pic.twitter.com/GKzj7XJjJa

Bitcoin’s reaction to Jinping’s remarks could also be evidence that Bitcoin is becoming further integrated into the cryptocurrency market as a whole.

In a recent interview with Finance Magnates, Zak Selbert, CEO and co-founder of analytics firm Indexica, said that Bitcoin’s price movements are the result of an increasingly dynamic range of factors, including the movements of other currencies, partnerships within the industry, and the way that blockchain and bitcoin are spoken about on the internet.

Other things that could be influencing the price of Bitcoin include “sentiment for Mastercard, futurity for gold, volume for ETFs, and buzz sentiment for blockchain.”

Selbert explained that “this really implies–if you look at the entity [itself]–that Bitcoin is part of a much larger ecosystem, and what moves it could be anything that happens in that ecosystem.”