Earlier this week, Facebook announced that it would be renaming its ‘Calibra’ wallet initiative to ‘Novi’. The announcement comes not so long after Libra unveiled Libra 2.0, a newer version of the global cryptocurrency project that is believed to have been designed to have greater regulatory appeal.

Though Calibra has always been separate from both Facebook and the Libra cryptocurrency project itself, the wallet was widely considered to be an important component of Libra, which was launched last June.

The digital wallet firm that was slated to provide custody options for Libra token holders formerly known as ‘Calibra’ is henceforth to be known as ‘Novi.’

Why did the rebrand happen? In a Facebook post on the name change, David Marcus–the head of the Libra project–stated in a Facebook post that the primary reason for the new name was that “the old name was a little too close to the name of Libra.”

Therefore, “we’ve made an update to make sure there is clear differentiation and clarity,” Marcus explained. Novi, like Calibra, “will be just one of the wallets that will eventually be built on the Libra network.”

Why ‘Novi’? Marcus explained that the new name for the wallet was not, in fact, named after a small town in the great state of Michigan; instead, the name “comes from the combination of two Latin words, ‘novus,’ which means new, and ‘via,’ which means way,” he wrote. 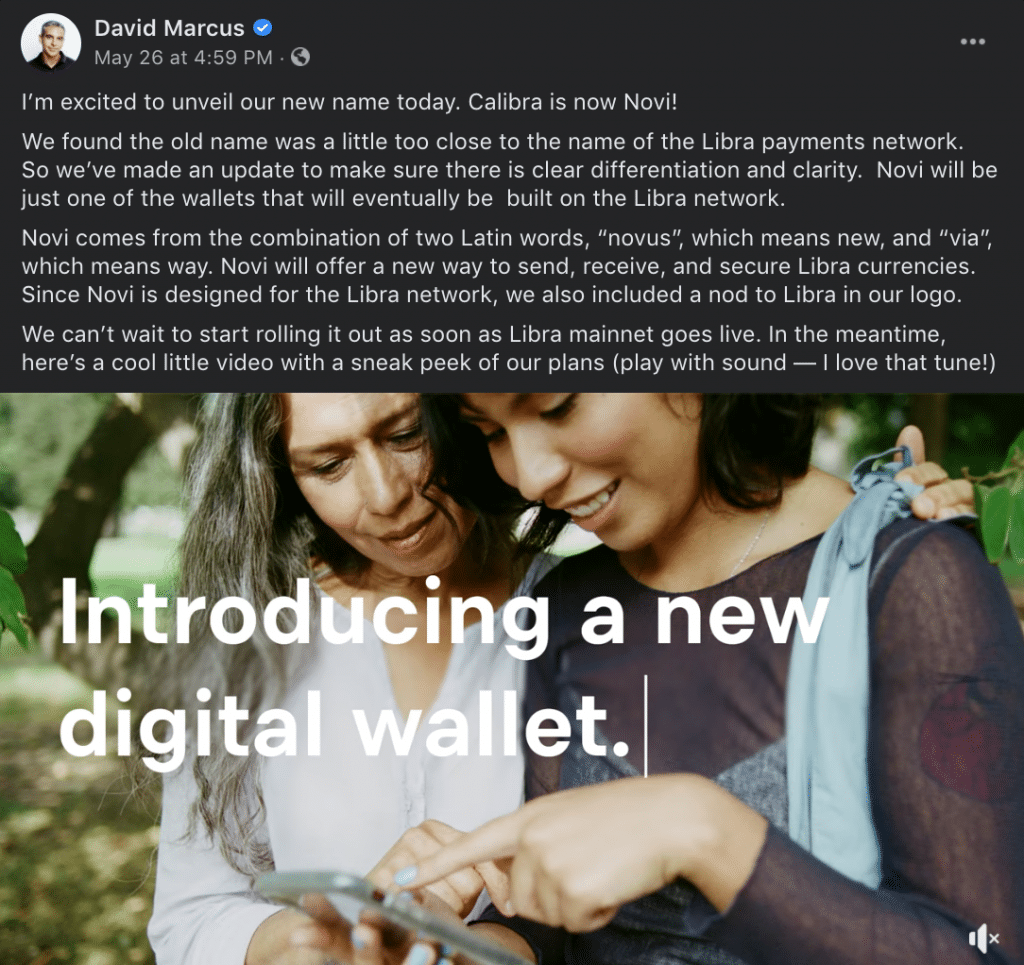 Marcus said that as such, “Novi will offer a new way to send, receive, and secure Libra currencies.”

A rose by any other name…

A spokesperson from Novi told Finance Magnates that the rebranding is just that: a rebranding; that there won’t be any changes in the functionality in how the-wallet-formerly-known-as-Calibra will operate.

“As a member of the Libra Association, we [Novi] remain committed to the Libra mission and are eager to begin delivering on it,” the spokesperson said, adding that “we are thrilled that seven new members have joined the Association in 2020 already.”

“We set out to create a distinction between [Libra and ‘Novi,’ formerly Calibra].”

Although the change to ‘Novi’ has been explained as an effort to differentiate between the Libra network and the Calibra wallet, the spokesperson also explained that originally, the similarity in the names between Libra and Calibra was intentional.

“When we announced Libra and Calibra last June, we wanted to demonstrate that Calibra, the digital wallet, was closely linked to Libra, the global payment system,” the spokesperson explained. “Both brands were born out of the same vision, to give people more access to the global economy.”

“However, we’ve found that Calibra and Libra sounded too similar, and people were getting confused, so we set out to create a distinction between the two,” the spokesperson said.

An “effort to decentralize the Libra stablecoin in the eyes of regulators”?

However, confusion between Libra and Calibra among potential users of the system may indeed be the primary reason for the name change; some analysts believe that the name change may be an attempt to distance the wallet from Facebook.

After all, much of the heat that Libra has garnered from regulators the world over has focused around Facebook’s mishandling of its users’ data. Facebook chief executive and founder Mark Zuckerberg himself acknowledged this in a hearing before the United States Congress late last year.

“This has been a challenging few years for Facebook,” Zuckerberg said. “We understand we have a lot to do to live up to people’s expectations on issues like privacy and security.”

Haider Rafique, the chief marketing officer of San Francisco-based cryptocurrency exchange OKCoin, explained to Finance Magnates that distancing the Libra project–as well as Calibra–from Facebook may be important to the future of both the network and the wallet.

Indeed, although the fact remains that “[…] Novi, previously Calibra, is the Facebook-built wallet with integrations for their entities: WhatsApp & Messenger,” Rafique said that it might be “better to separate Libra from Facebook’s direct involvement” for the sake of the project’s future.

” Oftentimes, optics and public perception go a long way even with regulators.”

Similarly, Reuben Yap, project steward for privacy-focused cryptocurrency Zcoin, told Finance Magnates that “some have opined that it is possible that they want to make it clear that Libra isn’t just a Facebook project, but instead only a member of the Libra Association.”

“I do actually believe that the official reason is to prevent confusion of Libra, the digital currency or association, with Calibra, which is merely Facebook’s wallet,” Yap continued, “especially since we have gone through this very same problem ourselves with Zerocoin (the privacy protocol) and Zcoin (the currency and project).”

Notably, Ripple has also made branding efforts to create a clear distinction between itself as a company and XRP, the currency, and network that is only used in some of its products.

Therefore, “we see some clear benefits of the rebrand,” Yap said, adding that “also, oftentimes, optics and public perception go a long way even with regulators.”

Therefore, “[…] By having Facebook’s official Libra wallet name not linked directly to the Libra brand, it may give an impression that Libra isn’t a ‘Facebook initiative,'” Yap added.

“One of the worries that regulators have is that Facebook is creating its own digital currency that challenges the sovereignty of traditional currencies,” Yap continued. “By showing that Libra is instead a consortium with many other members and that Facebook is merely a member among other equal members would assuage fears that Facebook will wield too much power.”

The name change could be “another effort to decentralize the Libra stablecoin in the eyes of regulators.”

OKCoin’s Haider Rafique also explained that indeed, “by distancing themselves from it they make it seem more community-focused…this likely is another effort to decentralize the Libra stablecoin in the eyes of regulators.”

And indeed, the “Libra Association involves many community members,” Rafique explained. The new name may allow Calibra to fit in more “casually” with these other members of the Libra Association, as well as any potential other wallets that may be built to hold Libra tokens.

Novi’s spokesperson did say to Finance Magnates that the name change was an attempt to lessen the association between Libra and Calibra (now Novi) so that potential users would be more aware of the possibilities to use other wallets for their future Libra tokens.

“With our new name, it’ll also be easier to address the misperceptions that we’re the only wallet for the Libra blockchain,” the spokesperson said, adding that “we hope that Novi will be one of many wallets.”

By creating some critical distance between Novi (formerly Calibra) and Libra (and then perhaps also between Novi and Facebook), it’s also possible that Libra and Novi could be setting the stage to try and separate their respective regulatory futures.

“The wallet and stablecoin could face very different regulatory paths,” OKCoin’s Haider Rafique said. “Libra will likely face years of regulatory battles to try and gain US approval of its stablecoin/currency, but its wallet (now Novi) could take a more narrow path and not need the same kind of regulatory approval.”

And indeed, it is possible that years could pass before Libra is live in the world: “the most important thing about Libra is that it still doesn’t exist,” remarked David Gerard, author of Attack of the 50-Foot Blockchain, to Finance Magnates.

“There’s nothing to talk about yet,” he said. “Let’s see what they come up with that doesn’t absolutely horrify the regulators.”

” With [Libra’s] recent redesign, regulators are being re-engaged.”

So far, Libra has indeed attempted to “come up with” at least one other iteration of itself meant to be less jarring for regulators.

Earlier this year, Libra 2.0 was unveiled: a new version of the project that stripped away the single-token model of the original Libra, and plans to “[enhance] the safety of the Libra payment system with a robust compliance framework” and “[build] strong protections into the design of the Libra Reserve.”

While Libra 2.0 doesn’t seem to have made a particularly strong impression on regulators one way or the other, Reuben Yap said that the new plan of action could change the regulatory course of the project: “with its recent redesign, regulators are being re-engaged,” he said.

And while the project’s original launch date has been delayed, the project still has an ambitious plan for the future: “the recent recruitment of pro-regulatory and compliance people to their ranks such as Stuart Levy as CEO and Robert Werner as general counsel also shows that they are serious in getting this off the ground.”

“I believe Libra is aiming to launch by the end of the year, while also continuing to recruit additional Libra Association members,” Yap said.

” Working with regulation was always 100% of the issue.”

However, David Gerard pointed out that in spite of the redesign and the Calibra rebrand, regulators are still drawing a hard line. “Libra say they could launch before the end of 2020, but first they need to get buy-in from regulators–at the very least the Swiss, US and EU regulators,” he said.

“The thing is, working with regulation was always 100% of the issue. The back-end technology being a blockchain, never mattered. The big issue was always going to be how to integrate this huge payment processor with existing real-world systems of regulation when you’re a large enough player to have systemic effects.”

Therefore, it seems that 2020 isn’t in the cards for Libra or for Novi: “I would be surprised if they do launch at the end of the year as planned,” Zcoin’s Reuben Yap said. “Perhaps sometime in 2021 is a possibility if they manage to assuage regulator concerns.”