The advent of the Libra Association lit a fire around the world: for the first time, lawmakers seemed to be taking cryptocurrency seriously; many thought that Libra would be crypto’s “killer app.”

Nearly a year later, however, the future of Libra looks quite different than it did last June. The Libra Network originally planned to have the network live during the first half of 2020, which has already nearly come and gone; additionally, Libra released a second official version of its whitepaper in April with an operations model that seems to be quite different than the original.

For as many changes that the Libra project itself has gone through, however, it seems that one thing remains constant: the moment that Libra was born, scammers have designed fraudulent investment schemes involving the sale of fake “Libra tokens” that are unaffiliated with the actual Libra brand.

“As we become aware of these sites, we work diligently to address them,” Disparte said. “We respond to inquiries concerning the validity of these pages, indicating that the only official website is Libra.org.”

Indeed, “we are still in the early stages of this project and work to address issues like these as they arise,” he continued. “We encourage people to report sites they deem as scams, by alerting us at Security@Libra.org.”

But are scammers working more quickly than the Libra Association–or Facebook itself–can respond to?

Reports of these fraudulent Libra token scams appear to have appeared as far back as July of 2019, one month after the Libra project officially launched: the Washington Post reported on July 23rd of 2019 that it discovered a dozen of these scams on Facebook itself, as well as some of its affiliated platforms.

“Roughly a dozen fake accounts, pages and groups scattered across Facebook and its photo-sharing app Instagram present themselves as official hubs for the digital currency, in some cases offering to sell Libra at a discount if viewers visit potentially fraudulent, third-party websites,” the publication said.

Then, in January, Finance Magnates reported on another of these scams: @CoinLibraToken, a since-disappeared Twitter account that was attempting to conduct a fake initial coin offering (ICO).

Sources familiar with the matter have also told Finance Magnates of “call-center” style scams in which callers claim to be selling Libra tokens to would-be consumers; however, FM was unable to confirm this.

In any case, new iterations of these kinds of scams continue to pop up: while the Libra scam landscape doesn’t appear to be as populated as it was in the past, entering the words “buy Libra token” into Google and Facebook revealed several fraudulent platforms that are claiming to sell Libra tokens or to be affiliated with the Libra network in one way or another.

Many of the scams seem to be targeting unbanked individuals in the developing world–the same group of people that the actual Libra network is supposed to help.

“UPLibra”, for example, has both a Facebook page and a Twitter account advertising its “mission”, which claims to be “committed to establishing a Libra OTC trading platform, providing fast, secure and valuable Libra exchange services to users all over the world. 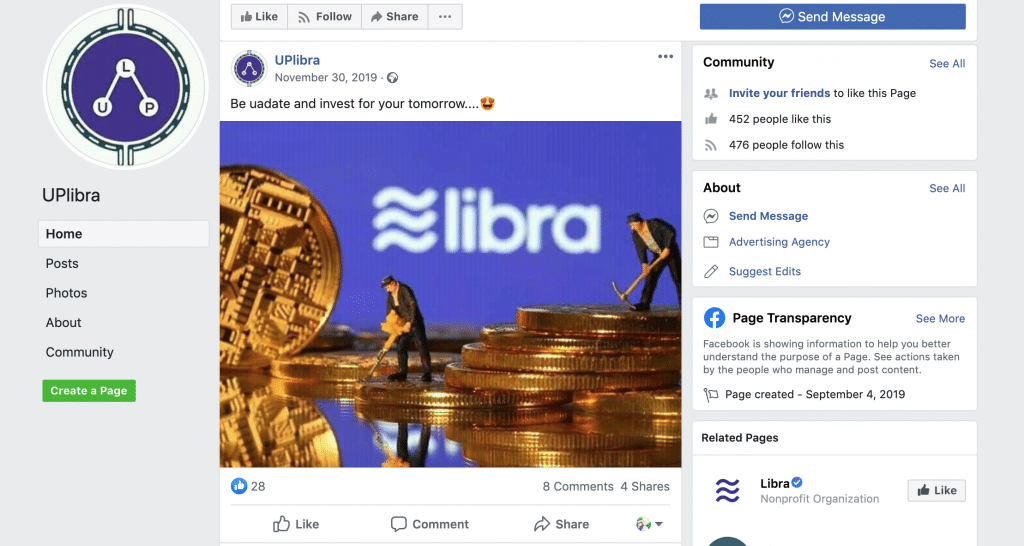 While the platform is “temporarily closed” to new registrants, and doesn’t seem to be explicitly advertising the sale of Libra tokens, the platform does make other claims that make it seem as though it does have some kind of Libra “token” that it is distributing–and possibly selling–to its users.

For example, on the UPLibra Twitter account (which has more than 17,900 followers), a post claims that “we were attacked by malicious and invalid registration, which [caused] the payout amount increased to 232.957 Libra crazily. Don’t worry. We are blocking these fake accounts and it will back to normal. (sic).”

Additionally, a Youtube video entitled “UPLibra.io Earn up to 100000 Libra coin Free” by user Mohankumar Chidambaram appears to depict the “inside” of the UpLibra platform, where “Libra” tokens appear to be stored. 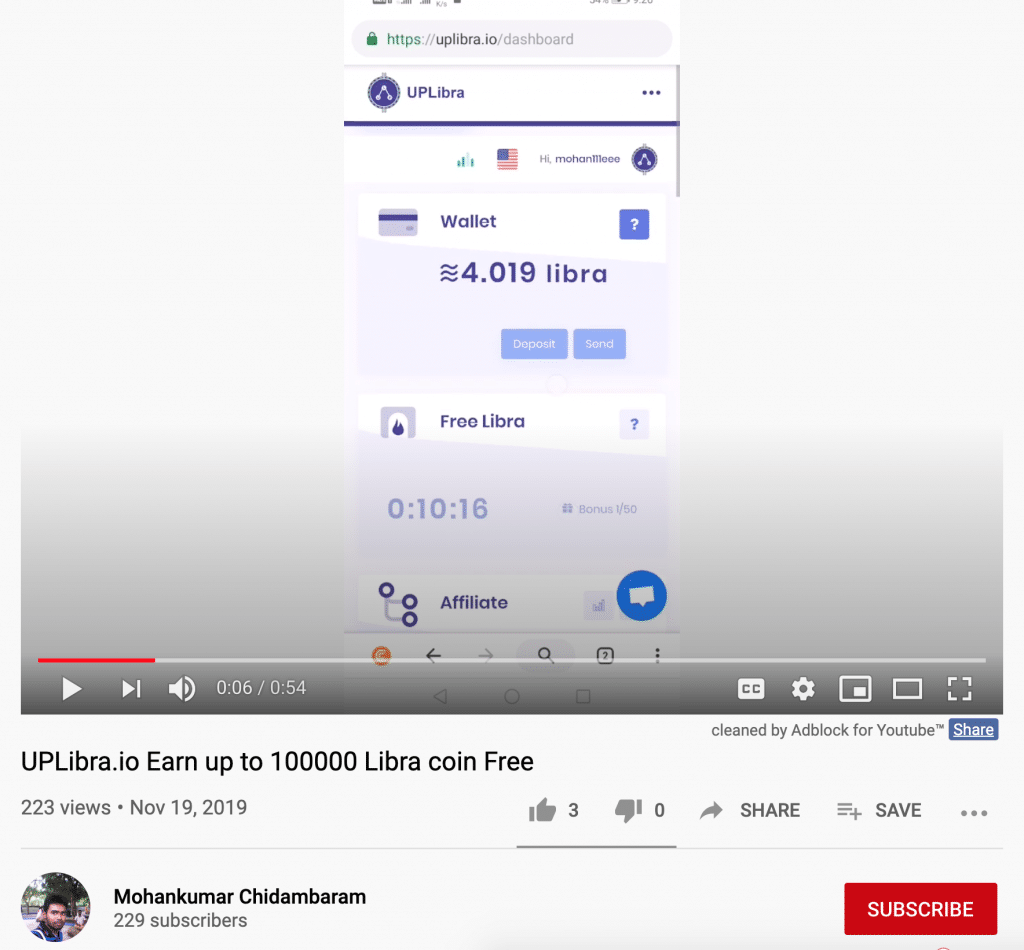 Finance Magnates reached out to UPLibra.io via Facebook about the nature of its business, but did not hear back before press time. Comments will be added as they are received.

Other scams exist at standalone websites

Another of these alleged scams seems to be sitting comfortably at OfficialLibraCoin.com, where users are told in grey-and-white lettering that they can buy Libra coins by “click[ing] here”. 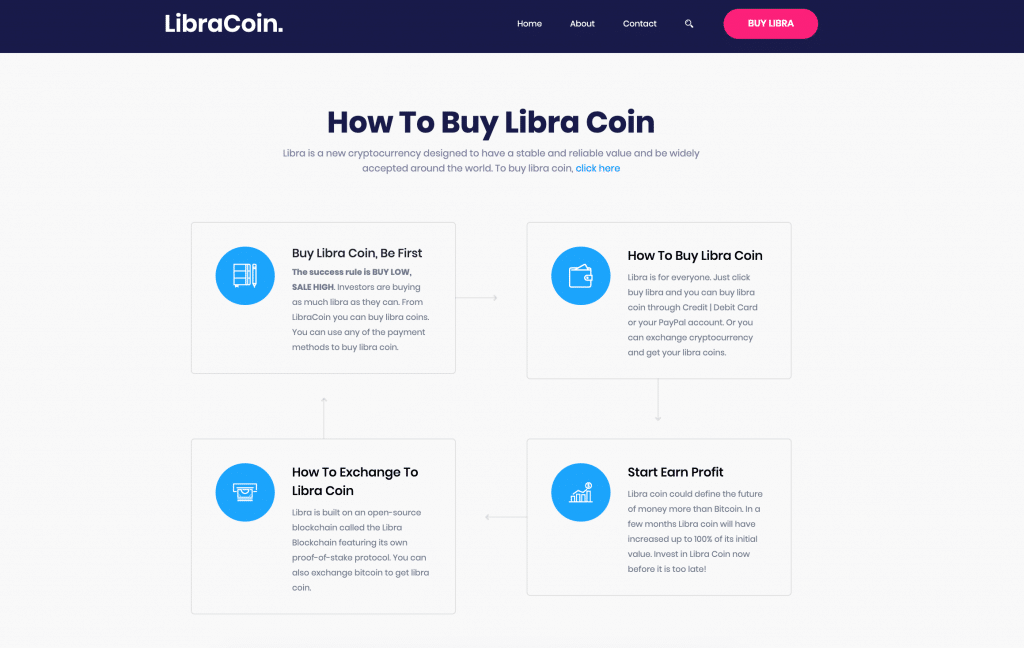 This site seems to unabashedly claim that it is legitimately affiliated with the Libra Association, even boasting a list of “partners” that–perhaps somewhat ironically–includes some of the companies that made the decision to exit the association last year, including MasterCard and PayPal. However, the fact that Libra tokens still don’t exist can be considered a strong sign that whatever the site is selling isn’t the real thing. 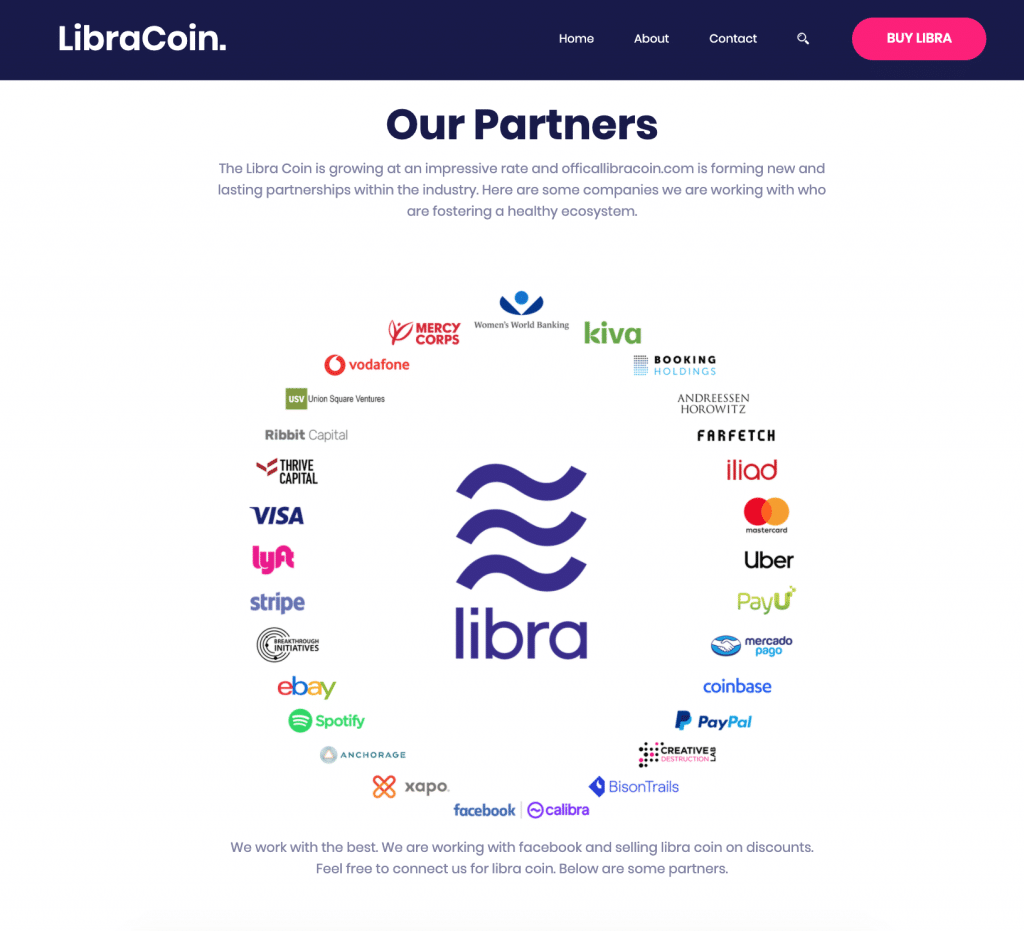 “[The tokens] don’t exist yet. If someone is selling them, it’s on their own, and it’s their problem.”

While these fake Libra token scams seem to be targeted at retail investors, it’s also possible that fake “Libra investment tokens” could be being marketed to institutional investors.

Speaking to Finance Magnates at the Ethereal Summit in Tel Aviv last September, Tomer Barel, Calibra’s chief operating officer, also acknowledged that there were fake tokens being sold to would-be Libra investors–perhaps even on an institutional level.

In fact, “[the tokens] don’t exist yet,” said Barel. “If someone is selling them, it’s on their own, and it’s their problem.”

When asked if the people dealing these “Libra investment tokens” were effectively selling “thin air,” Barel replied that they were.

Barel also explained that whether or not Libra tokens–which may act as equity in the cryptocurrency project–would be tradeable in the first place was up for debate.

“This is something that the members of the Libra Association will have to discuss,” said Barel. “Our hope, as we have already shared, is that we would hope that they do allow the tokens to be traded.”