Ripple Labs’ and its native currency, XRP, have often grabbed headlines over the past year and a half. The coin has steadily ridden the top of the cryptocurrency charts for over a year; a growing number of high-profile partnerships with banks around the globe have given the cryptocurrency and the company greater credibility and increased popularity.

Of course, a big part of Ripple Labs’ success has been its marketing schemes–most notably, its interest in celebrities. In May, Snoop Dogg made an appearance on the stage of an invite-only event Ripple held for charity; more recently, the company declared that it would be matching all donations made for Madonna’s 60th birthday to children in Malawi.

Earlier this week, Ripple Labs announced perhaps its most high-profile celebrity association to date. Former US President Bill Clinton was named as the keynote speaker at Ripple’s upcoming ‘Swell’ conference in October, a move that has drawn some backlash (and a lot of memes) from the Twittersphere.

The biggest (and perhaps most profitable) marketing device that the company may have used is its relationship with XRP, its native currency. Most people in out and out of the cryptosphere didn’t–and still don’t–know that there is a difference between the company, its products, and the cryptocurrency itself.

Earlier this year, Ripple Labs started taking steps to separate itself from XRP, its native currency. XRP is, by the way, still colloquially known by the name ‘Ripple’ in online communities and some notable news outlets.

Ripple May Benefit from Unclear Differentiation from XRP

While on the surface, this association may seem trivial, there is quite a bit of evidence to suggest that the fact that most people don’t know where Ripple Labs ends and XRP begins may have benefited the company and the currency in the past.

For example, the price of XRP spiked following an announcement that one of Ripple Labs’ products would be adopted by the UAE Exchange. However, this particular product (the xCurrent network) does not use XRP by default. 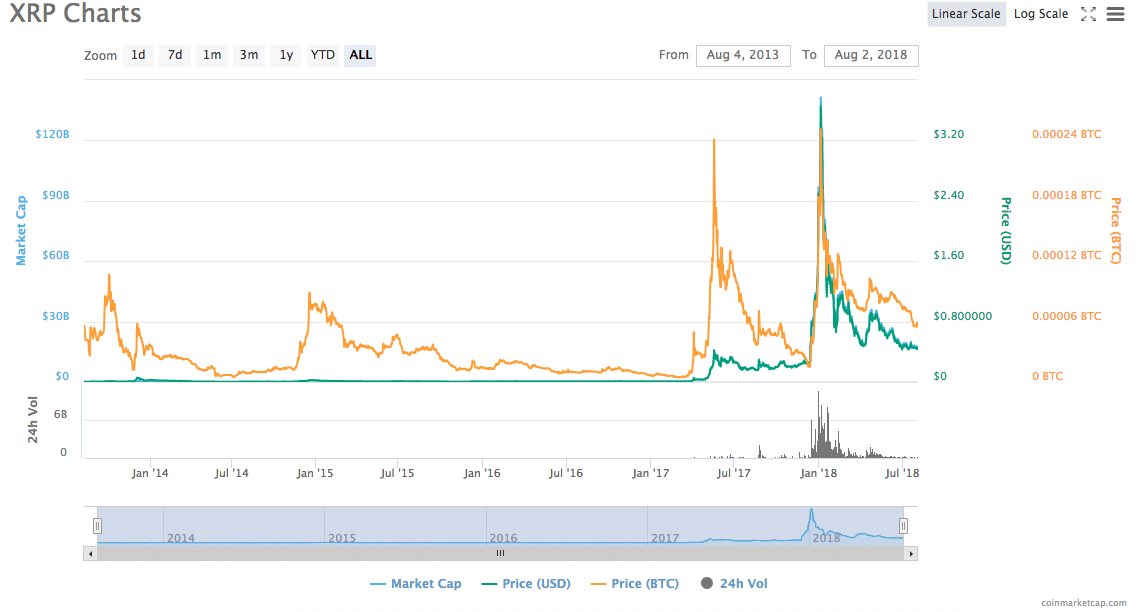 In a Business Insider report, eToro analyst Mati Greenspan said that “a lot of newcomers are of the understanding that holding on to XRP tokens is somewhat similar to holding shares in Ripple Labs, which is completely false.”

“A lot of the deals that they do and the payment channels that they set up, at the end of the day, are not going to use XRP tokens,” he explained.

In the same report, Business Insider noted that “it’s confusing to have both the company and the asset have the same name, logo, and creators.”

Marcus Treacher, Ripple’s Global Head of Strategic Accounts, clapped back: “it’s one of our creations that we’re proud of but it’s separate from the company. We are trying to reinforce the fact that there’s Ripple the company and there’s XRP the currency.”

Ripple Labs Has Taken Steps to Distance Itself from XRP, But the Reasons May Be Dubious

To be fair, Treacher was telling the truth: Ripple Labs has taken steps to more clearly differentiate the company from the cryptocurrency since the beginning of the year. The company has posted several announcements and articles explaining the difference; a new logo for the XRP currency was also launched earlier this year.

However, there is some evidence to suggest that the company only decided to do this to “desecuritize” XRP.

“In the event of XRP being classified as such by the SEC it would have a major impact on XRP’s price and its availability on US exchanges,” a Bitcoin.com report explained in March.

The report also said that given the fact that Ripple (the company) has such a large holding of XRP, the likelihood that the cryptocurrency would be classified as a security was–and still may be–high.

In fact, Ripple owns 61 billion of the 100 billion XRP tokens in existence, a holding that’s currently valued at roughly $10.6 billion. In response to criticism that the company’s holdings were high enough to ostensibly centralize the network, Ripple Labs placed 55 billion XRP into escrow. One billion XRP are released to the company each month.

Ripple: The Company vs. the Currency

Ripple Labs was originally founded in San Francisco in 2012, and the company offers three payment processing products: xCurrent, xRapid, and xVia. Some of these products don’t use XRP by default.

Let’s take a closer look to see how Ripple Labs’ products interact with XRP to form the RippleNet, a term that describes the Ripple ecosystem’s separate payment protocols and how XRP is used to link them.

xCurrent: Can Use XRP, but XRP Isn’t Integral

The xCurrent network was created to facilitate interoperability between all currencies, fiat, and crypto. The network has holdings in a variety of currencies, essentially making it possible to instantly and cheaply exchange from one currency to another. For example, a bank could use xCurrent to send US dollars to a recipient who wants to receive money in euros.

xCurrent does not operate on the XRP Ledger. In fact, this network is built on another distributed ledger called Interledger. Interledger was also developed by Ripple Labs, but it is now managed by a World Wide Web Consortium under the control of a nonprofit that is working to improve internet standards.

While XRP can be traded on xCurrent (as nearly any other cryptocurrency can), XRP is not an integral part of xCurrent.

There really isn’t a difference between xCurrent and xRapid. xRapid is defined as a separate product, but xRapid is just when XRP is sent through the xCurrent network. 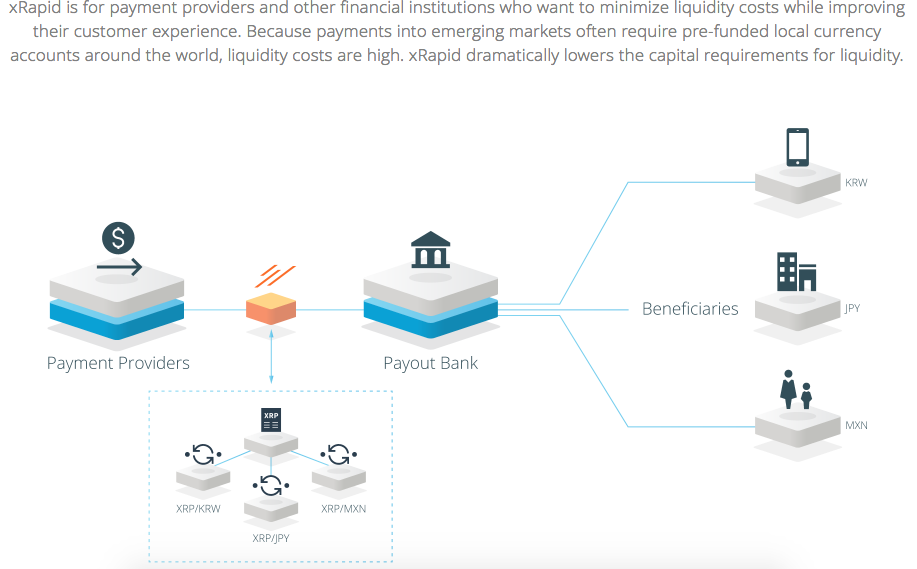 Why would something as simple as this qualify as an entirely separate product? The simple answer is that combined, XRP and xCurrent offer a liquidity solution to customers. Companies can use the service to swap their assets in and out of XRP, which results in faster processing by the xCurrent network.

A growing number of companies have begun experimenting with xRapid, including Moneygram and Western Union. A smaller number have actually begun actually using xRapid in their operations, including Cuallix.

This product does use XRP and theoretically should create a higher demand for XRP tokens, which may result in a higher token valuation.

“What drives value is usage,” said Ripple CTO Stefan Thomas in a CoinDesk report. “A quantifiable way to look at that is like how much liquidity is going through the token. So, I think that’s like the name of the game here, it’s trying to get as much liquidity through it, and the more liquidity, the more value, and that’s what we’re trying to do.”

xVia is essentially a payment interface designed to facilitate usage of both xCurrent and xRapid. Therefore, xVia also does not use XRP by default, although it is an option.

The interface allows its users to track payments and generate transaction invoices.

Although these products are not directly related, they are tangentially linked to one another. What benefits one does have the potential to benefit the whole Ripple/XRP ecosystem.

Still, as an investor, knowing the difference between these products is essentially to understand how their usage will affect coin valuation. We can only hope that Ripple Labs will continue to try and educate the public on how these protocols interact with one another.

Nonesense and foolish , All this info is from ripples net , You kept spreading fud in your own statements , How the hell do you tell people that the xrp in escrow was released to the company every month , it makes no sense , The escrow was made to fund liquidity to companies needing to purchase XRP at the right time , the excess supply in the market is returned back to the escrow to prevent xrp from flooding the market

They still profit heavily on XRP and were the holders of ALL of the supply which was partially sold to the public, handed to media news sources, probably to the celebrities as well, and is already basically doomed to be a centralized coin which they STILL want to pay companies to start accepting to pump their coin’s price even more to make themselves extremely rich. They want to keep separating themselves from it because they don’t want to be responsible for the biggest selling of an unregistered security in existence in an unresponsible manner. The coin is hardly distributed or… Read more »

XRP is the future