For some, it must be almost frustrating that after a push past $18,000, Bitcoin seems to be in a healthier place than ever before.

The last time that Bitcoin was over $18,000 in 2017, it had been driven there by a narrative of hype and FOMO (fear of missing out) – everyone and their mother was clamouring to get a piece of the action. Then, as soon as the bubble was born, it burst, sending Bitcoin on a three-year journey to recovery.

Now, it seems that the moment of recovery may have arrived. 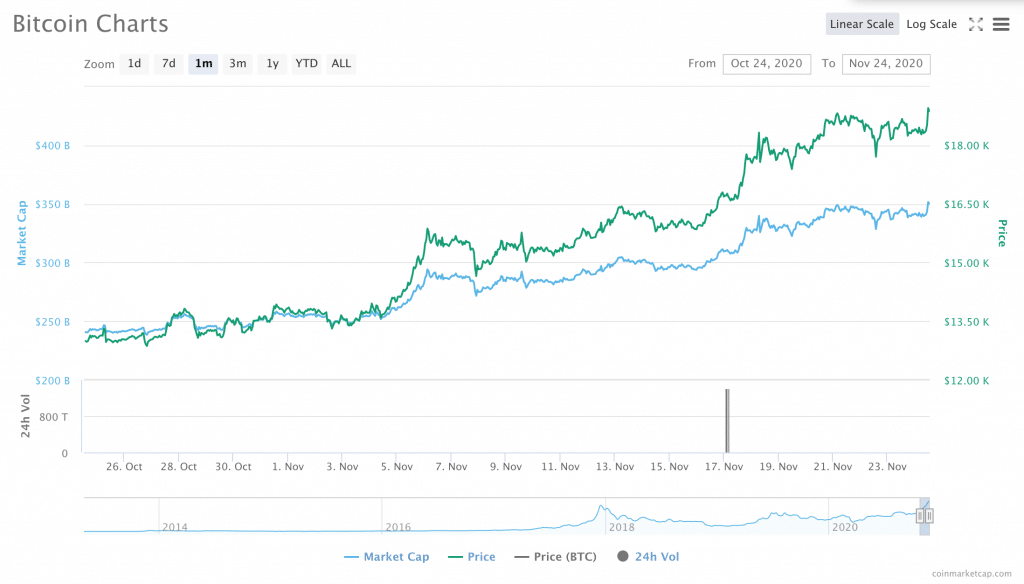 Indeed, Bitcoin has been sitting comfortably above $15,000 for most of this month. BTC has been solidly above $16k for more than a week, and the last few days have seen strong movement past the $18,000 mark. At press time, data from CoinMarketCap showed that a single Bitcoin was worth $18,527.79.

For many, though, there is an import?

Certainly, part of the reason is that people have been scientifically proven to have an irrational preference for round numbers, and in a world that operates on a number system that largely centers around multiples of 10, seeing numbers with a few zeroes on the end is certainly a satisfying feeling.

There may be other psychological factors that are contributing to the anticipation of the $20,000. For example, the same set of phenomena that may have contributed to Bitcoin’s “Curse of 10,000” may also be applicable here: like $10,000, $20k may be a marker at which BTC (and other financial markets) tend to have stalled out in the past.

Indeed, “if you had said to me just a few weeks ago that we would soon be in touching distance of $20,000 – bitcoin’s all-time high – I may have voiced some doubts,” Simon Peters, market analyst at eToro, said in a statement shared with Finance Magnates. “Yet here we are, hovering around the $18,000 level, just $2,000 away from that legendary $20k mark. That’s a movement that could easily occur in just a few hours.”

In a separate comment to Finance Magnates, Peters said the run that has led to BTC’s current price point was “exceptional”: “a further 7.5% price increase would put bitcoin at its all-time high of $20,000, which is not beyond the realms of possibility to achieve this week and likely we will see this price level before Christmas,” he commented.

What’s driving the price of Bitcoin up? According to Peters, “it’s simply supply and demand.”

Hodlers Are Getting Greedy: “on the Supply Side, There Is Less Bitcoin in Circulation,”

“On the supply side, there is less bitcoin in circulation,” he explained. “Since the market crash in March this year, the amount of bitcoin being held on exchanges is continuously decreasing.” Indeed, several reports earlier this month showed that the amount of BTC being stored on exchanges was reaching its lowest point in months.

What does this mean? “This activity suggests investors are moving their bitcoin to their own storage and ‘HODLing’ crypto for the long term instead of trading to take advantage of any fluctuations in the price,” Peters said. “Therefore, investors that are willing to sell bitcoin can command a higher price for it.”

In other words, HODLers are holding out for a big pay-off, a factor could indicate that BTC is in for a massive sell-off when the $20k threshold is crossed.

Demand for Bitcoin Is Increasing

Still, an apparent increase in the amount of demand for Bitcoin could absorb part of the impact of such a sell-off: “in terms of demand, we have seen in recent months that central banks globally are increasing monetary supplies in an effort to reduce the economic fallout caused by the coronavirus pandemic,” Peters said.

“Due to its finite supply, some investors are viewing Bitcoin as an inflation hedge, which was highlighted in particular by Microstrategy and Square – two listed companies who added bitcoin to their reserves for the first time this year.”

Still, “I wouldn’t go as far to say that bitcoin is a true safe haven yet because these assets are generally uncorrelated or negatively correlated with the economy as a whole,” he continued. After all, let us not forget: “in March this year, we saw bitcoin crash at the same time as stock markets did, following global lockdowns. However, as time goes on and the asset matures, it may well move into its own.”

“The General Rebuttal That Bitcoin Is Too Volatile Doesn’t Really Hold Weight Anymore.”

All the same, the stimulus and quantitative easing that many governments around the world have put into action following the spread of COVID-19 seem to have made non-inflationary assets (including Bitcoin) more attractive.

After all, QE is likely to have a major inflationary effect on cash in the long term: Ed Nwokedi, Chief Executive at real estate tokenization platform RedSwan CRE, told Finance Magnates that “there is a lot of dry cash sitting around in bank accounts generating zero yields,” he said. “If this money is not moved into a more stable environment, inflation will eat away at the purchasing power of the assets.”

Of course, it can certainly be argued that Bitcoin, with its famous volatility, is hardly a ‘more stable’ environment for value storage.

However, eToro’s Simon Peters believes that “the old-aged arguments around Bitcoin’s volatility and real-world use cases also seem to be being chipped away at.”

“The general rebuttal that bitcoin is too volatile doesn’t really hold weight anymore, especially when you consider that a fair number of S&P 500 stocks have been more volatile this year,” he said.

“We’ve also seen moves towards greater adoption, with the likes of PayPal allowing [its] customer base to now be able to buy, sell and hold Bitcoin. With 350 million registered users, this represents a huge number of potential new users entering the crypto ecosystem who may have previously been averse to investing on unfamiliar exchanges or brokers.”

Bitcoin as a Tool of “Portfolio Optimization”

Therefore, it seems that, while progress is slow, Bitcoin is becoming an increasingly important piece of investor portfolios.

Indeed, “What we see driving this bullish market in Bitcoin, is the narrative of Bitcoin as an alternative asset for portfolio optimization,” said Daniel Kim, Head of Revenue at SFOX, to Finance Magnates.

However, Kim does not believe that Bitcoin is a ‘safe haven’ or ‘hedge against inflation’ so much as it is an instrument of revenue.

“Companies, investors, and individuals are accepting and seeing Bitcoin as an alternative asset to include in their portfolio or balance sheet to help diversify and improve their returns; and less of Bitcoin acting as a safe haven,” he said.

However, this may mean that Bitcoin operates in extremes of vicious and virtuous cycles: “with that, the rally can shortly end when everyone begins to take profits,” he said. In other words, as long as BTC is turning a profit, everyone is happy; but when profit-taking happens, BTC may see red for a while.

“Ethereum is One of the Biggest Benefactors of the Increasing Inflow of Investors in the Digital Asset Space.”

Profit-taking is not the only thing that could grind the rally to a halt. Simon Peters told Finance Magnates that “in terms of what could end this rally, as some Bitcoin positions begin to crystallize, we have started to see some of this liquidity move to the larger-cap altcoins.”

Indeed, Scott Freeman, Co-founder of JST Capital, told Finance Magnates that “everyone is moving into Bitcoin, especially as the price inches closer and closer to $20K, and this bullish mentality is spreading outwards to other tokens in the ecosystem.” 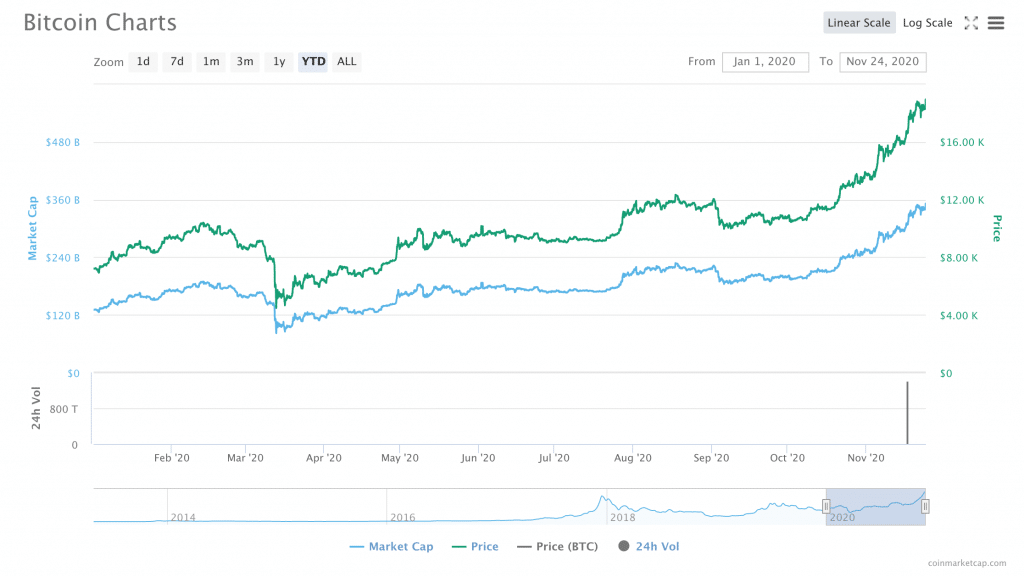 “Ethereum is one of the biggest benefactors of the increasing inflow of investors in the digital asset space, with its price surpassing the $600 mark on Monday,” Freeman continued. “I expect that this movement into altcoins will only continue as the marketplace matures and continues to attract all types of investors.”

Simon Peters added: “we saw a similar situation in 2017 at the end of the Bitcoin bull market where the likes of Ethereum and XRP rallied to all-time highs. Some of the larger altcoins are now at significant lows versus Bitcoin and may present opportunities for investors.”

Beyond Markets, Bitcoin Has Some Obstacles to Overcome

Bitcoin still faces larger hurdles outside of the markets themselves.

Indeed, Anton Altement, Chief Executive of Osom.Finance, told Finance Magnates that “the risks are the same as they have been historically, but there are two which are particularly worth highlighting — (a) regulatory and (b) end of pandemic.”

“While we have seen more positive rhetoric by the regulators, no one has yet fully embraced this asset class. There is still a meaningful risk of larger regulators turning negative on the asset class which will curb the appetite of the institutional players,” he said.

Additionally, “the way that the end of the pandemic will look like will define the trajectory of QE curtailing,” he said.
“A reduction in QE will slow down inflation which is likely to lower the demand for ‘safe-haven’ assets” that could include Bitcoin.

However, “importantly, while the regulatory risk can materialize any time, the factors stemming from the end of the pandemic won’t manifest themselves in the nearest future.”