With cryptocurrencies maturing in front of our eyes, their transaction volume has grown a fair bit in the past few years. As a result, the value Bitcoin transactions hovers around the $1.3 trillion mark in 2018 alone, outpacing those of giant payment processors such as PayPal and Discover while coming in close second to Visa.

According to Yassine Elmandjra, a cryptocurrency analyst at ARK Invest, the seemingly relentless growth foretells a rather interesting future for Bitcoin and most other cryptocurrencies.

Elmandjra published a graph showing the original digital currency’s transaction volume compared to that of Visa, UnionPay, Mastercard and the Discover cards. Along with that, he tweeted: “Bitcoin’s base layer transaction volume doesn’t compare to Visa’s, MC’s et al. But it was never supposed to.” 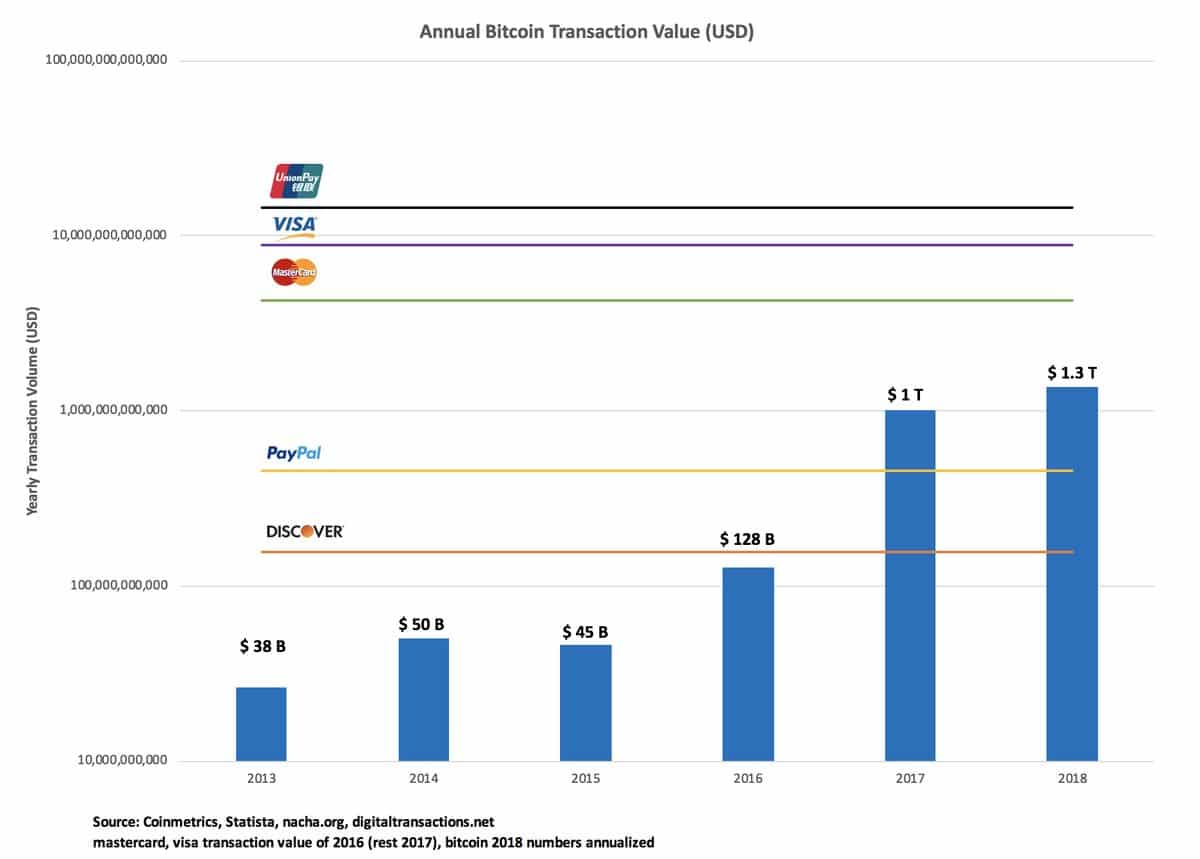 Bitcoin, and even the combined transaction value of all cryptocurrencies, appears to have a long way to go to compete with Visa, which handled $8.9 trillion in transactions in 2016. However, with a few coins finally cementing the asset class’ place in the payment ecosystem, it is only a matter of time before we see some big changes.

According to data from Blockchain, the Bitcoin market has seen a nearly 80 percent increase per year over the last five years, reaching its peak in 2017 with an eightfold increase in transaction value. This is definitely pretty impressive for an asset class that a lot of financial experts deem to be a niche market.

If the same growth rate could be achieved in the years ahead, interesting things will be bound to happen in the future, including Bitcoin overtaking Visa by the end of 2022, as the aforementioned growth rate theoretically puts the cryptocurrency on target to surpass $13 trillion in transactions.

This does not mean that people are or will actively spending trillions using cryptocurrency on goods and services, as a big portion of Bitcoin transactions are merely used for speculative trading. But such milestones in themselves are a big step forward, as it shows how cryptocurrencies are scalable, even while its use cases are being disputed by those who call them a fraud, a bubble, or worse.

Share this article
Tags: Bitcoin Accepted
Got a news tip? Let Us Know

Good Read, I’m optimistic that the growth rate with continue