Throughout 2019, the cryptocurrency landscape experienced a number of important shifts: the inception of Libra brought about a new round of regulatory attention and marked the first incidence of “big tech” entering into crypto; BTC gained ground on its journey to becoming a more widely-accepted investment for institutional investors, and crypto companies consolidated and partnered in order to create more secure and higher-quality platforms and products for users.

Indeed, Binance’s 2019 was marked by efforts toward rapid and widespread expansion around the globe–and most, if not all, of these efforts, appear to have been fairly successful. As the cryptocurrency industry heads into the new year, it seems as though Binance’s influence is poised to become more prominent than ever–and the exchange is looking to keep growing.

What can Binance’s efforts throughout 2019 tell us about what 2020 holds for the exchange–and, by proxy, for the rest of the cryptocurrency industry?

“We believe that expanding our ecosystem and growing the industry will bring about significant benefits in the long term.”

Binance CEO Changepeng Zhao acknowledged in an October blog post that in terms of profit, Binance may not be the biggest kid on the block (relatively speaking (although, perhaps ironically, information about the token burn that was announced in the same blog post led The Block to find that Binance had just crossed the $1 billion profit threshold.)

Changpeng Zhao wrote in the blog post that Binance’s might be relatively lower than some smaller exchanges that even though the exchange may have a larger user base, “Binance’s profits may be smaller compared to some other crypto exchanges.”

Zhao went onto say that he sees the primary reason for this as the exchange’s decision to “keep the barriers to entry as low as possible”–in other words, Binance tries to keep its fees at a minimum.

The blog post also cited Binance’s strategy of “actively fund[ing] and invest[ing] in long-term growth projects, regardless of market conditions.”

Indeed, “we believe that expanding our ecosystem and growing the industry will bring about significant benefits in the long term,” Changpeng Zhao wrote. “We re-invest a significant amount of our income back into growth; as a result, our profit margins are smaller at the moment.”

The risk of making the wrong decision is more acceptable than “the cost of being too slow.”

However, relatively low profit margins don’t mean that the growth of Binance’s presence and influence in the cryptosphere and the world hasn’t gone unnoticed.

Indeed, in “Binance is Blitzscaling,” a report by thesis-driven investment firm Multcoin Capital, authors Spencer Applebaum, Tushar Jain, and Kyle Samani laid out exactly how far and wide Binance’s reach over the cryptocurrency has spread since the exchange was founded in 2017.

0/ We’ve been following Binance closely over the last 9 months and have observed that they are currently in Blitzscaling mode. And it doesn’t seem like the market is recognizing that

A bit of background: the term “Blitzscaling” refers to a book of the same name by author Reid Hoffman, who also happens to be the founder and former CEO of LinkedIn.

In Blitzscaling, Hoffman writes a philosophy that seemingly matches Binance’s strategy of risking lower profits in the short term in exchange for the possibility of higher profits in the long term: “when a market is up for grabs, the risk isn’t inefficiency—the risk is playing it too safe. If you win, efficiency isn’t that important; if you lose, efficiency is completely irrelevant.”

“[…] When you blitzscale, you deliberately make decisions and commit to them even though your confidence level is substantially lower than 100 percent,” Hoffman explains.

“You accept the risk of making the wrong decision and willingly pay the cost of significant operating inefficiencies in exchange for the ability to move faster. These risks and costs are acceptable because the risk and cost of being too slow is even greater.”

In Q3 2019 alone, “Binance launched more products than all of the other Real 10 exchanges combined.”

And “too slow,” Binance is definitively not. Multicoin’s report showed that in the third quarter of 2019 alone, “Binance launched more products than all of the other Real 10 exchanges combined.” 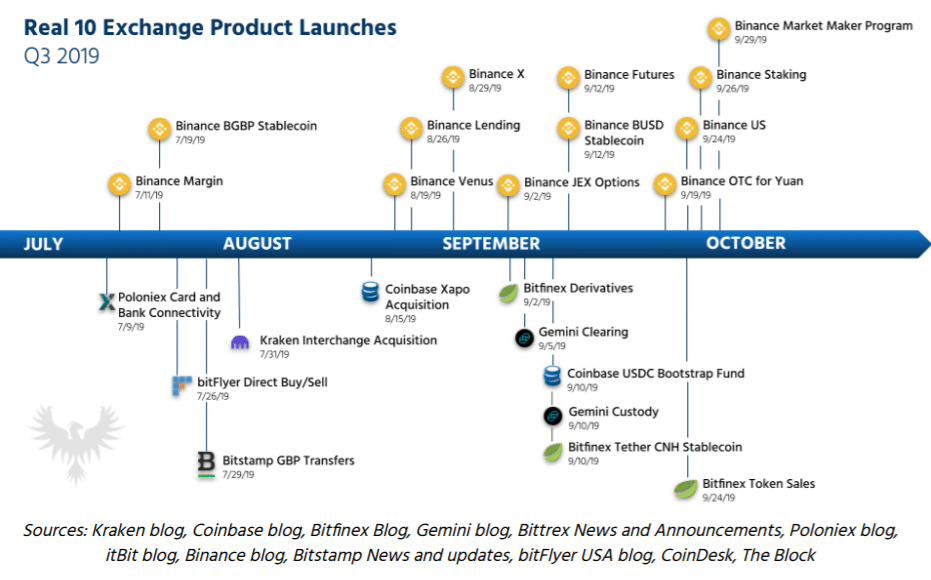 Notably, while Changpeng Zhao has positioned himself as the face of Binance, he has commented publicly that each of these projects operates fairly independently: “So far, each team’s doing quite well because the teams are relatively independent and relatively self-sufficient,” he said.

“But overall, I personally don’t get involved in a lot of the initiatives we have now, so I’ve actually don’t know what’s going on in all of Binance. I do have a high level of understanding, but on the day-to-day basis, the team just carries on with it.”

And Binance’s 2019 initiatives didn’t stop there–in the time since Multicoin’s report was published, Binance has made acquisitions of fiat gateways in various countries around the world throughout the last quarter of 2019–a plan that is set to continue into 2020, according to Changpeng Zhao.

Changpeng Zhao announced at a Binance Super Meetup in Singapore in early November that “one of the key things I want to do for the next few months – six to nine months or so – is to get those other 180 onboarded onto Binance.com,” Zhao said.

Indeed, just a few months ago, Binance only supported crypto-to-fiat trading in a handful of fiat currencies. At the time, however, the exchange had users spread across 180 countries, many of them with their own fiat currencies.

And so began a spree of acquisitions and partnerships that would open fiat gateways to countries around the world. By the end of November, Binance had acquired Indian cryptocurrency exchange WazirX, partnered with Turkish payments company Papara, and had also opened fiat-to-crypto gateways in Nigeria, South America, and a number of other countries and locales around the world.

In December, Binance also formed a partnership with Paxful, an Estonia-based Bitcoin trading platform with a “Virtual Bitcoin Kiosk” that allows users to purchase BTC with 167 fiat currencies.

Binance could become “the neo-bank of the future”

And indeed, this doesn’t seem to be out of the question in terms of Binance’s ambitions for the future. In August, the exchange announced the launch of its ‘Venus’ project, which it described as “an initiative to develop localized stablecoins and digital assets pegged to fiat currencies across the globe.”

“Binance is looking to create new alliances and partnerships with governments, corporations, technology companies, and other cryptocurrency companies and projects involved in the larger blockchain ecosystem, to empower developed and developing countries to spur new currencies,” the announcement explained.

While the project has been compared to Facebook’s Libra, Binance co-founder He Yi said in an interview with Bloomberg that Venus has learned from Libra’s missteps: “if we want to launch Venus in a country, we’ll make sure it complies with the regulations.”

In any case, Multicoin sees a future in which Binance could act as a sort of global bank in addition to its status as a cryptocurrency exchange–whether through Venus or as a continuation of the exchange in its current form.

“The internet and modern consumer behavior is driving a rebundling of the financial services stack,” Multicoin’s report explained. “Viewed through this lens, Binance is actually competing with robo advisors like Betterment, remittance companies like TransferWise, and stock brokerages like Robinhood to become the neo-bank of the future. Even companies like Uber are throwing their hat into the ring.”

Of course, Binance’s journey hasn’t been all sunshine and roses. In particular, the exchange experienced a “security breach” in May of 2019 that led to the loss of $40 million in cryptocurrency.

In a blog post detailing the impact of the breach, Changpeng Zhao wrote that “hackers were able to obtain a large number of user API keys, 2FA codes, and potentially other info.”

According to Zhao, the hackers “used a variety of techniques, including phishing, viruses, and other attacks. We are still concluding all possible methods used. There may also be additional affected accounts that have not been identified yet.”

Zhao also said that in retrospect, he sees the hack as “a blessing in disguise.”

“While we were always heavy on security, this incident forced us to revamp many areas in our security architecture,” he continued. “While I won’t go into details of our security practices, we are now far more secure than before.”

And to its credit, the exchange has not experienced a financial hack since May–however, in early August, Binance was victimized by a hacker who took control of a large chunk of Know Your Customer (KYC) data. The hacker reportedly demanded a total of 300 Bitcoins (worth around $3.5 million) from the exchange, threatening that they would release the data if the exchange didn’t pay up.

Following the security breach, Binance announced that it would offer a lifetime VIP membership to all its users affected by the recent Know Your Customer (KYC) images leak.

But even with the security breaches looming in the rear-view mirror, Binance is continuing to charge ahead; as ambitious as the exchange was in 2019, the exchange could be even more determined to continuing growing and expanding in the year ahead. Whether or not the exchange will be successful, though–only time can tell.

Finance Magnates reached out to Binance for comment on this article but did not hear back before press time.