Binance burns BNB tokens equivalent to 20 percent of its profits each quarter, a practice that the exchange plans to continue until one of two things happen: there are just 100 million BNB left, or just 50 percent of the original total supply of BNB remain.

So far, more than 14.5 BNB has been burned, meaning that there are still just under 85.5 million left to be destroyed. Token burning is a practice that increases a coin’s scarcity and, therefore, can promote higher valuations.

This quarter’s token burn was roughly 54 percent more valuable than last quarter’s burn, which was worth $23,838,000. This correlates with an increase in Binance’s quarterly profits from $119.19 million in Q2 of this year; in a letter to investors, Binance CEO Changpeng Zhao said that the total value of the tokens burned “represents significant growth over the last quarter.”

Larry Cermak, Director of Research for The Block, tweeted that “since Binance burns 20% of profits, we can deduce that it made approximately $186 million in profit in Q3,” adding that “this is the second-highest quarterly profit” that the exchange has ever reported.

The surge in Binance’s profits is especially surprising given current market conditions: “Binance’s spot volume dried up in the last few months. The market has been dead and yet Binance just burned the equivalent of the second-best quarter in existence.”

Cermak also noted that Binance’s cumulative revenues had surpassed $1 billion, a fact that Changpeng Zhao says that the exchange didn’t even realize.

Nevertheless, Zhao chalked the growth up to “new services like Margin trading, an increased number of fiat on-ramps to make purchasing cryptocurrencies more accessible, and a multitude of other services we introduced that are beginning to bear fruit.” Binance also recently introduced staking for 12 cryptocurrencies.

Value of BNB token is down

Despite the positive performance of Binance as a company, the value of BNB tokens themselves has taken a dive over the past several months. At press time, CoinMarketCap listed BNB around $18.02, down more than 50 percent since its all-time high of $39.57 in June.

Zhao wrote that “there are many possible reasons for” the coin’s loss of value, “although none of them make much sense to me. Yes, there was a drop in the price of bitcoin, our industry’s index. There was some FUD on various things (per usual).”

“Markets often confuse people, even me sometimes,” he said. 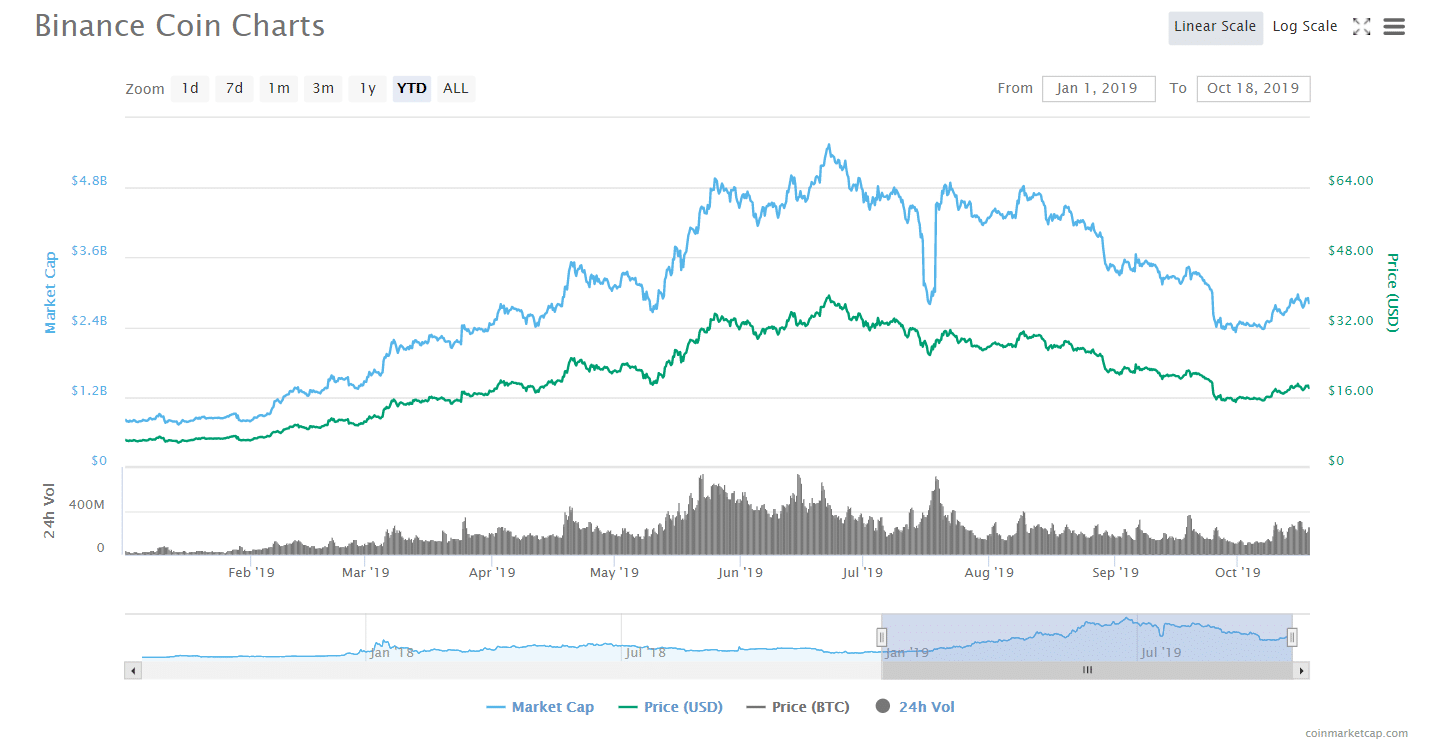