Testing of Bakkt’s Bitcoin futures contracts starts today as the ICE-backed startup is trying out the underlying infrastructure to see how things will evolve before it launches its much-anticipated product to the masses.

The new Bitcoin offering involves two futures contracts; daily future contract, which will enable customers to transact in a same-day market, and a monthly bitcoin futures contract. The contracts will be margined by ICE Clear US, including the collection of initial margin collateral and variation margin to manage risk.

During the test-launch phase, aka “user acceptance testing,” each contract on the Bakkt’s platform will consist of one bitcoin with a minimum tick size for trading set at $2.50 per bitcoin. The futures contract will be cleared through ICE Clear US, which also clears trades for NYSE.

COO Adam White previously shared a figure illustrating the benefits that institutions would expect when they trade with their yet-to-launch crypto venue. The list includes block trades; a fee holiday through the end of the year; market maker incentive programs to encourage liquid markets; and integrations with ISVs and regulated brokerage platforms. 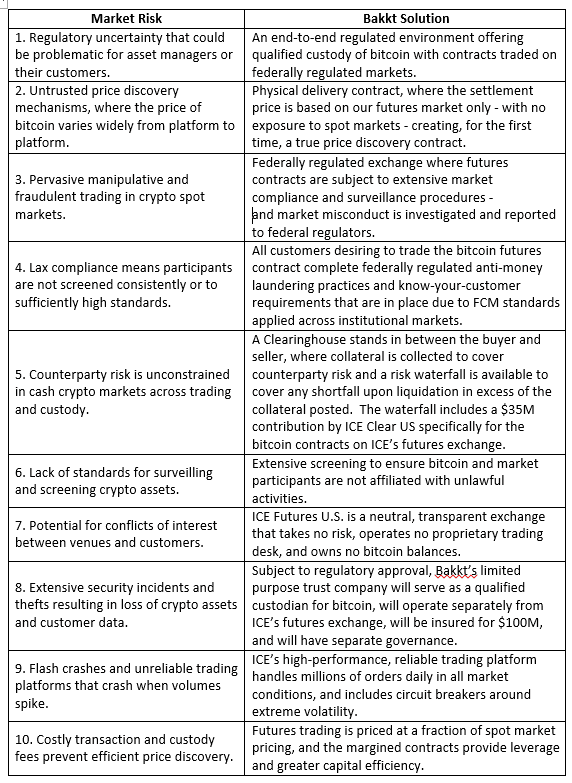 And in order to placate the CFTC, the physical delivery and storage of bitcoin will be provided by Bakkt’s qualified custodian. This was the issue that has made the agency most concerned about the NYSE owner’s product as crypto assets have been vulnerable to the risks of possible theft and manipulation.

Bakkt also revealed that it would pay $35 million to contribute to arrangements of hedging against clearing risks. “This puts our own “skin in the game” and aligns our interests for market integrity and safety with market participants,” said CEO Loeffler.

Earlier this year, Bakkt acquired Digital Asset Custody Company (DACC), which provides cryptocurrency custody solution for institutional investors and token issuers holding digital assets. The takeover should help Bakkt secure the NY regulator’s approval to operate as a so-called ‘qualified custodian,’ which permits the company itself to hold custody of customers’ tokens. In addition, Bakkt also announced it has partnered with BNY Mellon to offer geographically-distributed storage of private keys secured by the bank.