When Facebook published the whitepaper for the Libra project in mid-June, the company seemed fairly optimistic. The project was branded with a mission of humanitarian goodness–banking the unbanked, lowering the cost of sending remittances, and giving greater access to more efficient financial services for all.

However, almost as quickly as you can say “big brother is watching,” regulators pounced. Within days, task forces were formed, senate and congressional hearings were scheduled, and it was clear that Facebook was going to have to run the regulatory gambit if it wanted to see its project come to fruition.

Additionally, it quickly became clear that the “unbanked” markets that Libra was hoping to dip its toes into were not as welcoming as Facebook may have originally thought they would be.

The developing world has shown similar hostility towards Libra. Perhaps this is because they saw the threat that Libra posed to their national economies: in countries with primarily cash-based monetary systems, an easily accessible digital currency could potentially become the default currency–and that’s a problem.

The US and the EU haven’t taken well to Libra; developing countries are also fighting back

So, the governments of a growing number of these developing countries have taken action against Libra.

Perhaps the biggest single blow to the project so far has been the hostility shown by the Indian government. Before Libra was anywhere close to its launch, India was already working towards making the use of cryptocurrency by its citizens very difficult. One piece of legislation even proposed a ten-year jail sentence as a punishment for using or owning cryptocurrency.

Therefore, it wasn’t exactly a shock when within weeks of the whitepaper’s publishing, Facebook announced that it would not be launching Libra in India due to regulatory concerns. Previously, the Indian Economic Times had reported that “the cryptocurrency to be unveiled by Facebook next year, will not be available in India” sourcing a person “directly in the know.” The Reserve Bank of India also had not been contacted by the Libra project at all.

However, the possibility of India being left out of the project represented a serious blow to the project– previously, it had been speculated that the Indian remittance market was the project’s primary target.

So, Facebook’s Q2 report announcement that “there can be no assurance that Libra or our associated products and services will be made available in a timely manner, or at all,” also didn’t come as a big surprise.

“Market acceptance of such currency is subject to significant uncertainty,” the report said. “…We do not have significant prior experience with digital currency or blockchain technology, which may adversely affect our ability to successfully develop and market these products and services.”

But while India may be out of the question–and the United States isn’t exactly keen on the project, either–it’s a big, big world out there, with a few big, big markets. After all, India and the US are only the second and third biggest countries in the world.

What about the biggest country of them all? 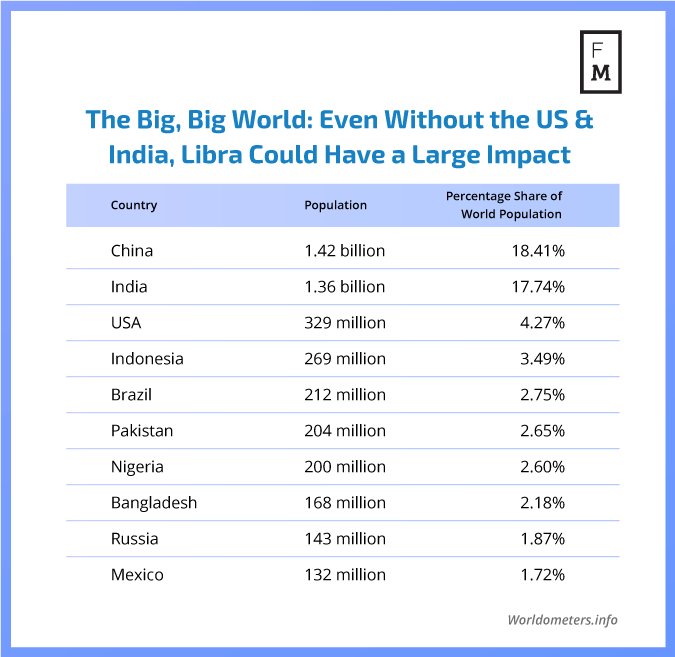 Libra will likely be banned in China, too–unless Facebook can make some compromises

Well, actually…China doesn’t seem to be too keen on Libra, either–and given the country’s attitude toward both crypto and Facebook, that’s not a surprise at all.

So, while Chinese officials have not said outright that Libra or its associated wallet companies (i.e., Calibra) will be banned within China’s borders, most experts agree that the currency will be banned (if it is, indeed, ever launched at all.)

China could allow Libra–for a price

However, Mr. Sampathkumar postulated that China would also require Facebook to use its big-brother capabilities to the country’s advantage for Libra to be allowed.

“In this scenario…it would be quite a different animal than what we imagine Libra to be,” he explained. “The Chinese government (and others) would love to have a fully tracked digital currency that they have control over both in terms of taxation and the ability to turn people’s finances on and off based on a social score or desirability to the government.”

However, it seems that Facebook would be unlikely to curb to those kinds of desires–at least, not publicly.

The possibility of foreign digital currency could be a threat

The primary piece of evidence for this is the fact that the People’s Bank of China (PBoC), the country’s central bank, is reportedly ramping up the development of its own digital currency in response to the threat that Libra could pose to its financial system.

PBoC originally began exploring the development of its own digital currency in 2014, but the project has stalled for several years. But according to a report in the South China Morning Post on July 8th, Libra has kicked the country’s digital currency efforts back into gear.

The ABCs of Price Risk HedgingGo to article >>

Huang Yiping, a Peking University professor and the rotating current chairman of the research initiative, told the publication that “it remains unclear if Libra will succeed … but the concept won’t disappear, [and] it has sent a warning to China that its lead [in digital finance] is not a sure thing.”

“Why wait for others to issue it? The power of a country is always stronger than an Internet company.”

In the same report, PBoC director Wang Xin explained the country’s concerns over what Libra could do to China’s economy: “if the digital currency is closely associated with the U.S. dollar, it could create a scenario under which sovereign currencies would coexist with U.S. dollar-centric digital currencies,” he said.

“But there would be in essence one boss, that is the U.S. dollar and the United States. If so, it would bring a series of economic, financial and even international political consequences.”

Ren Zhengfei, Founder and CEO of Chinese telecommunications giant Huawei, has also called for the creation of a Chinese competitor for Libra. “China can also issue such a currency by itself,” he said to Italian news outlet L’Economia.

“Why wait for others to issue it? The power of a country is always stronger than an Internet company.”

Russia has often been compared to its Chinese neighbor for many reasons–the countries’ attitudes toward censorship, world trade, and government, in general, have some notable similarities. Russia has also been in the midst of exploring the creation of its own digital currency, the CryptoRuble, for several years.

Perhaps it’s somewhat odd, then, that Russia’s response to Libra has been rather cool; the country doesn’t seem to see Libra as a competitor to the country’s national currency–rather, Libra will be treated as any other digital currency.

“No one is going to ban it,” said Alexei Moiseev, Russia’s deputy finance minister, on July 1st. Moiseev seemed confident that Libra would fall under the denomination of “The ruble is our national currency, and all calculations must be made in it.”

Although Russia’s market stands as just the 9th largest in the world in terms of population, the country’s status as a world power could mean that its political stance on Libra has some “sway” in the greater scheme of things.

But it seems unlikely that Libra will have much impact on the country’s decision to launch (or not launch) the CryptoRuble. The project seems to be plodding ahead, although its release date and other details about its future are somewhat unclear. The most recent news of the project came in January, when Anatoly Aksakov, chairman of the financial markets committee at Russia’s state parliament the Duma, said that the currency could be released within the next 2-3 years.

If Libra won’t launch–what then?

Still, there is a possibility that the dawn of Libra could ring in a new era of nationally-backed digital currencies. (After all, China and Russia haven’t been the only countries that have explored the creation of a digital currency.)

Or at the very least, Libra could force regulators to finally do something about the cryptocurrency industry. Many industry insiders are hoping that the regulatory spotlight that has been placed on crypto as a result of Libra will bring about the wave of oh-so-sweet-supportive-yet-protective regulation of their dreams.

It’s possible that even without Libra, regulators could continue to ride the crypto wave and create regulations for the industry, and that the exploration of the creation of nationally-backed digital currencies could come to fruition.

But it’s also possible that the cryptocurrency industry could find itself (more or less) back at square one. After all, in China, “Neither the Chinese government nor state-supported Chinese companies like WeChat want an RMB competitor, which works just fine in China,” said Dr. Michael Yuan, co-founder of CyberMiles, a Hong Kong-based nonprofit foundation, to Finance Magnates.

At the same time, initiatives like the CryptoRuble do act as some evidence that the industry will continue to move forward regardless of whether Libra is launched.

“One of the Chinese government’s first orders of business currently is to prevent capital flight”; Russia may be taking a more open approach

However, although Libra may not be launched, concerns around the project’s impact in China are still very real. Indeed, “one of the Chinese government’s first orders of business currently is to prevent capital flight,” Mr. Sampathkumar explained.

“Anything that falls within the category of allowing its citizens to move from the local currency to another asset is frowned upon. Third-party stablecoins, ICO tokens and of course Bitcoin, Ethereum and others fall into this category and have either been banned or severely curtailed.”

This is likely also why the Chinese government would not allow the creation of cryptocurrencies by companies like WeChat and AliPay.

But Dr. Yuan said that so far, there hasn’t been much desire for the use of native cryptos in Chinese payment apps from any end. “WeChat already has a widely-used mobile payment system in China. It is digital RMB,” he explained. “Therefore, there is no real need for WeChat to issue another currency for payment.”

Indeed, the use of a native coin in a payments app would be most useful for users who are transacting internationally–and it could be argued that the Chinese government wants to keep to close an eye on where its citizens’ money is going to allow a third-party company to handle something like that; otherwise, domestic cryptocurrency exchanges in China probably wouldn’t be a thing of the past.

But the creation of a nationally-backed digital currency by China could potentially boost the country’s economy, particularly if other countries were incentivized to use it when they transact with China (or even other countries.)

But will China release its own coin, regardless of whether or not Libra moves forward? Perhaps; Russia will almost definitely release the CryptoRuble and seems confident that Libra isn’t as much of a threat as most other countries are making it out to be.

Will the launch or non-launch of Libra cause a wave of nationally-backed cryptocurrencies? That remains to be seen.