Customers of e-commerce giant Amazon have expressed the desire to be able to buy cryptocurrency from the company, a new report by Investing.com says.

The report contained the results of a survey that asked customers what kinds of new offerings they would like to see from the company. 13 percent of respondents said that they would be interested in purchasing crypto from Amazon, around the same amount interested in Amazon-branded health-care coverage (15 percent) public transportation (13 percent), and medical marijuana (13.5 percent.)

Customers “Anticipate that Amazon Will Eventually Provide These Services”

While these figures paled in comparison to respondents who said they would be interested in an Amazon-branded computer (73 percent) or local coupons and deals (52 percent), the report explained that “respondents anticipated Amazon would eventually provide [these] services.”

The interest in products like medical marijuana and cryptocurrencies can be partially attributed to the company’s millennial customer base, which spends more at Amazon than any other group of customers. According to the survey’s results, Millennials spend about $123 per month, while Gen-Xers spent around $118 and Baby Boomers spend roughly $102.

The results of the survey come just days after Binance CEO Changpeng Zhao said on Twitter that Amazon would eventually be forced to issue its own native cryptocurrency. 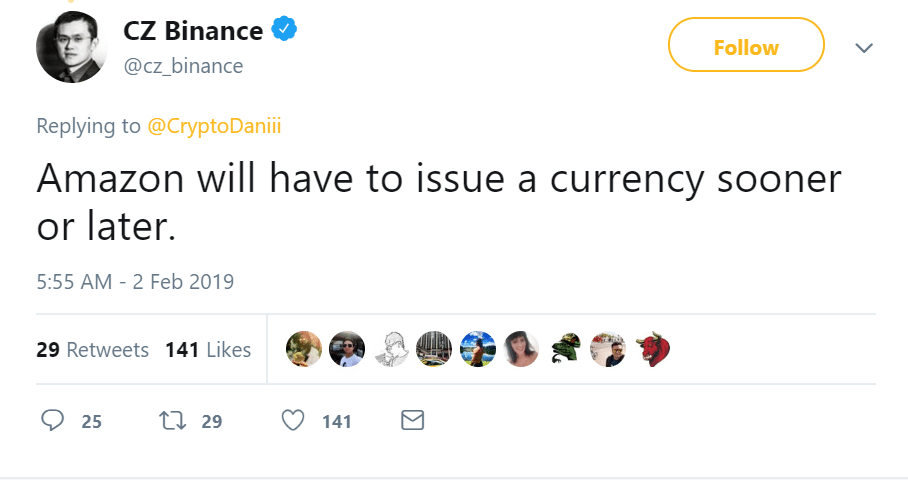 While Amazon has not made any public moves toward developing its own cryptocurrency or adopting usage of a separate cryptocoin, the company has dabbled in blockchain in the past. On November 28th of last year, Amazon announced two blockchain-related products: the Amazon Quantum Ledger Database (QLDB) and Amazon Managed Blockchain.

Still, the company doesn’t seem to have budged on its decision not to accept Bitcoin or other cryptocurrencies as payment. Amazon payments head Tom Taylor told Recode in a 2014 interview: “Obviously [Bitcoin] gets a lot of press and we have considered it, […] but we’re not hearing from customers that it’s right for them and don’t have any plans within Amazon to engage Bitcoin.”

However, Managing Partner of Straight Up Capital, Sean Keefe, believes that cryptocurrency adoption by other large web-based companies, like Facebook, may eventually cause Amazon to change its mind.

“The impact of Facebook entering the cryptocurrency space could have a profound impact on ushering in the mass adoption and use of cryptocurrencies,” he told Value Walk. “Implementing crypto and blockchain tech across Facebook’s platforms: WhatsApp Messenger, and Instagram would bring the application to approximately two billion active users.”

“Facebook’s move will only further the growing pressure for other Internet-based companies, like Amazon, to adopt cryptocurrency payments and develop its own coin or token to keep pace with Facebook in the mounting technologic arms race implementing blockchain technology.”